Vikings WR Jefferson set to show Eagles what they missed 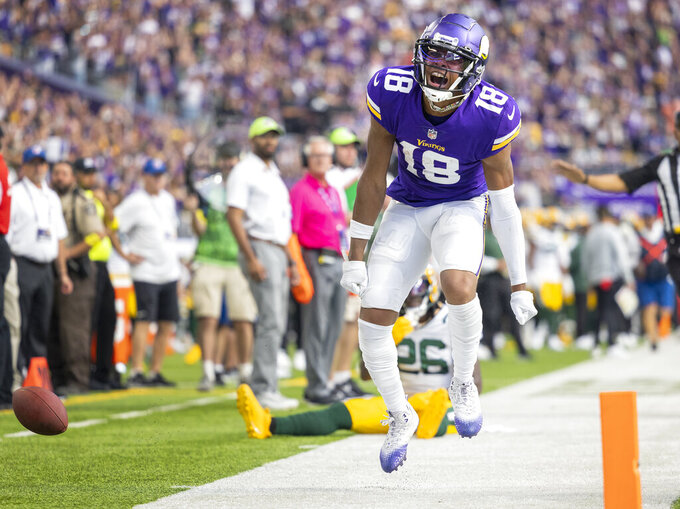 Justin Jefferson (18) of the Minnesota Vikings celebrates a 64-yard reception in the second quarter of an NFL season opener game against the Green Bay Packers, Sunday, Sept. 11, 2022, in Minneapolis. (Carlos Gonzalez/Star Tribune via AP) 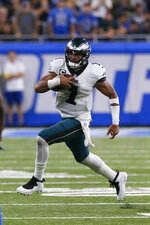 PHILADELPHIA (AP) — Still the offensive coordinator in Indianapolis, Nick Sirianni could not miss an opportunity to scout some of the loaded talent that littered the rosters of LSU and Clemson in the 2020 national championship game.

Trevor Lawrence and Joe Burrow were the can’t-miss QBs.

Sirianni, though, also kept an eye on LSU’s Justin Jefferson, the dynamic receiver who had nine catches for 106 yards and sent the Tigers to the national title.

As for Sirianni’s scouting report?

“Man, this Justin Jefferson guy is really, really good,” Sirianni said. “Like, he’s really quick. He’s got great hands. He runs really good routes. I remember it made the game a little more enjoyable for me.”

The enjoyment from his play might dim a bit Monday night if Sirianni — in his second season as head coach of the Philadelphia Eagles — has to watch Jefferson — in his third season as a Pro Bowl receiver for the Minnesota Vikings — put up big numbers against a maligned Eagles defense.

After accumulating the most yards receiving in NFL history over a player’s first two seasons, Jefferson went wild in the opening win over the Green Bay Packers with 184 receiving yards and two TDs. He had a franchise-record 158 receiving yards in the first half.

“Incredibly fortunate to have a guy like Justin on our team,” Vikings coach Kevin O’Connell said.

And thanks to the Eagles, incredibly lucky.

The Eagles needed a wide receiver in 2020 and Jefferson was still on the board when it was their turn to draft with the 21st pick. The Eagles passed on Jefferson and instead went with TCU wide receiver Jalen Reagor. The Vikings had the 22nd pick and their reaction to Philadelphia’s Reagor pick was one of absolute glee — team officials laughing at their good fortune that Jefferson would be their pick.

Jefferson is a star attraction Monday night when the teams play at the Linc.

“He’s a different breed,” Eagles cornerback Darius Slay said. “He’s one of the best players on their team, so they’re going to find a way to get him the ball.”

Hey, Reagor will be there, too, only as an afterthought with, of all teams, the Vikings after he washed out with the Eagles. Reagor had 64 receptions for 695 yards and three touchdowns in two seasons with the Eagles. He’ll return to Philadelphia as the Vikings’ primary punt returner. He made two fair catches and returned one punt for 7 yards against the Packers.

Reagor didn’t work out for the Eagles. But the Eagles aren’t hurting at wideout.

DeVonta Smith (who somehow did not have a catch in the Eagles’ 38-35 win over Detroit) and A.J. Brown just might be the best pairing in franchise history. Brown caught 10 passes for 155 yards, tying his career high, in his Eagles debut on Sunday and quickly has become QB Jalen Hurts’ go-to option on the outside. The Eagles traded the No. 18 overall pick and a third-rounder to the Tennessee Titans on draft day for Brown, who then signed a four-year deal with $57 million guaranteed.

Smith set a club rookie record last season with 916 yards receiving, but went without a catch against the Lions while being targeted just four times. It’s likely Hurts will look to get Smith more involved against Minnesota.

“DeVonta is a premier player in this league, and did I think in a million years he wouldn’t have a catch? Absolutely not,” Eagles offensive coordinator Shane Steichen said. “I did not think it was going to go that way. But that’s my job, I’ve got to get him the ball.”

If Hurts can hit Smith and Brown for big plays, look out. If not, the Vikings just might be laughing again at the Eagles expense.

Reagor isn’t the only former Eagles player visiting with the Vikings. Linebacker Jordan Hicks, who tied a career high with 14 tackles and had a sack and a forced fumble in his debut for Minnesota last week, played the first four years of his career for Philadelphia and was a starter on the Super Bowl championship team in the 2018 season.

Hicks played the last three years for Arizona before signing with the Vikings as a free agent to join stalwart Eric Kendricks in the middle of their revamped scheme under new defensive coordinator Ed Donatell.

READY FOR SOME FOOTBALL

Vikings quarterback Kirk Cousins, after losing the first nine starts of his career in Monday night games, has won two of those in a row — at Chicago in 2020 and 2021.

Greg Joseph kicked a career-best 56-yard field goal in the opener for the Vikings and has missed only one FG (from 53 yards) over his last 12 games.

Not bad. But how about this? Harrison Smith got his 30th career interception last week against the Packers. That’s the most among active NFL safeties since he entered the league in 2012.