With wait over, Bengals hire Zac Taylor as coach 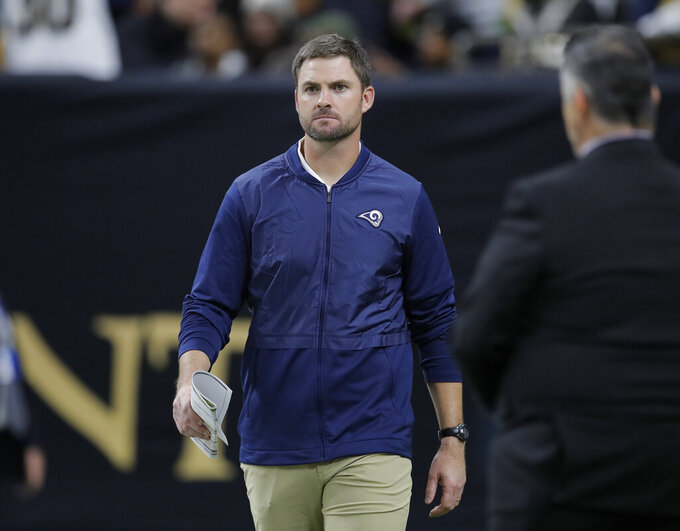 FILE - In this Jan. 20, 2019 file photo Los Angeles Rams quarterbacks coach Zac Taylor is seen before the NFL football NFC championship game against the New Orleans Saints in New Orleans. The Bengals have hired Taylor as their coach, Monday, Feb. 4, 2019, heading in different direction after failing to get a playoff win during Marvin Lewis' 16 seasons. They targeted the Rams quarterbacks coach as Lewis' replacement, but weren't able to close a deal until LA's season ended with a 13-3 loss to the Patriots in the Super Bowl on Sunday night. (AP Photo/Carolyn Kaster, file)

CINCINNATI (AP) — After 16 years without a playoff win under Marvin Lewis, the Bengals decided to try something different. But they had to wait more than a month before hiring Zac Taylor as their next coach in hopes of ending a long streak of futility.

Taylor's already been in town enough to know the history.

The Rams quarterbacks coach reached a deal Monday a few hours after LA's 13-3 loss to the Patriots in the Super Bowl at Atlanta. Cincinnati had to wait until after the title game to make his hiring official. The Bengals and Dolphins were the last two teams to fill head coaching vacancies, with Miami getting the Patriots' Brian Flores.

After three straight losing seasons and 28 years without a playoff victory, Cincinnati joined the latest wave — turning to a young, offensive-minded coach.

"Zach is a bright coach with an offensive mind and background, which is important to have in today's NFL," owner Mike Brown said in a statement. "And he's young. He embraces new ideas and new ways to do things, which will be a good thing for us."

Taylor is the Bengals' youngest head coach since they hired Dave Shula at age 32 in in 1992. Shula went on to lose 50 games faster than any coach in NFL history, finishing 19-52.

The Bengals will introduce Taylor on Tuesday in what amounts to a homecoming for the 35-year-old coach.

Taylor has a head start, familiar with the city's affinity for chili parlors. He was offensive coordinator at the University of Cincinnati in 2016, when the Bearcats finished 4-8. Coach Tommy Tuberville was replaced after the season, and Taylor headed back to the NFL.

He also knows about the professional football team's longstanding futility, too. During his one year in town, the Bengals were starting their streak of three straight losing seasons that ultimately cost Lewis his job .

Taylor is taking a cue from his father-in-law, a former NFL head coach, in how to handle his new job.

"My father-in-law, Mike Sherman, coached a long, long time, and he just said, 'Be true to yourself. Be who you are, and people will follow you,'" Taylor said during Super Bowl week. "And I found that way to work for me."

His challenge is reminiscent of what Lewis faced when he arrived in 2003. He'll be counted upon only to win games, but also to win back fans turned off by the owner's aversion to change.

Brown was loyal to Lewis and stuck with him despite an 0-7 mark in the playoffs, the worst in NFL history for a head coach. The Bengals haven't won a playoff game since the 1990 season under Sam Wyche, tied with Washington for the fifth-longest streak of postseason futility in league history.

Since then, Shula, Bruce Coslet, Dick LeBeau and Lewis failed to get a playoff win. They managed only seven winning seasons combined, all by Lewis.

Crowds at Paul Brown Stadium have shrunk each of the last three years, with the Bengals finishing next-to-last in the NFL attendance last season. By bringing in an outsider as head coach, the Bengals hope to send a message that things are changing.

It won't be easy in the short-term.

Last season, the Bengals had their youngest team in Lewis' 16 years, and the inexperienced showed. Also, they've been unsettled at the coordinator positions in recent years, adding to the challenge. Quarterback Andy Dalton will be working under his third different coordinator in the last three seasons. The defense will have its fourth coordinator in three years — Lewis moved into the role last season after firing Teryl Austin.

Taylor's work with quarterbacks made him a head coaching prospect.

He wasn't much of a quarterback prospect himself. Undrafted out of Oklahoma, he played one year as a backup with Winnipeg in the CFL.

He joined the Dolphins in 2012 and helped Ryan Tannehill develop into one of the league's top passers. He took over as offensive coordinator for five games in 2015 after Bill Lazor — the Bengals' coordinator last season — was fired. After the one season at the University of Cincinnati, Taylor hooked up with the Rams to work with Jared Goff.

"A lot of things stand out about him, but Zac is so good at communication and being open and honest," Goff said. "He's a lot like Sean (McVay) in that way. He's got a bright future."