Welcome back: Steelers return to familiar rhythms of Latrobe 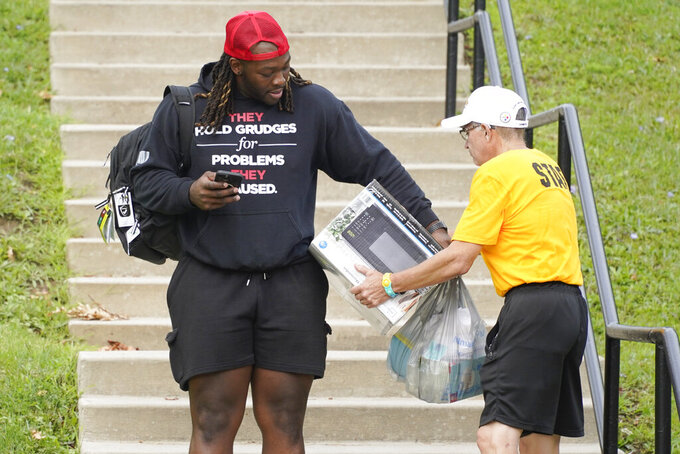 All can be replicated anywhere.

Cramped quarters. Packed stands that erupt when the Steelers make the walk down the hill to Chuck Noll Field. Languid nights in the dormitories with the outside world stripped away, where the foundational chemistry required for a team to endure the rigors of an 18-week regular season is laid.

It would have been easy for Pittsburgh to abandon its yearly trip to Saint Vincent's bucolic campus an hour east of the city. The Steelers navigated the restrictions of the COVID-19 pandemic as well as anyone, reaching the playoffs each of the past two years after spending training camp working out at Heinz (now Acrisure) Field.

Yet when the COVID-19 protocols eased, the team didn't hesitate in returning to the place that's served as their summer home since 1966.

“It’s the opportunity to capture the intangible, that which we cannot measure," coach Mike Tomlin said Tuesday as he began his 16th training camp with the team. "Although you can’t measure it. You acknowledge it exists. And you acknowledge it exists by working at it. And that’s what I’m challenging the team to do. To give of themselves, their time, their space, their knowledge, their experience while we’re here, formally and informally.”

Less than two dozen of the players who made their way down the steps from the team parking lot to Rooney Hall to check in were around three years ago. The majority have only heard stories about what to expect.

Defensive end Cam Heyward advised his teammates to bring their own sheets and pledged to take on all comers in Scrabble, one of the countless games he stashed in his room to help fend off the inevitable boredom.

“I'm looking forward to getting to know everybody, to get to beat up on everybody,” Heyward, now the longest-tenured member of the club, said with a smile. “It should be fun.”

Even more importantly, it also provides another step in a return to normalcy, something that's been in decidedly short supply since the pandemic began in early 2020. It's one of the reasons road signs welcoming the Steelers back after two years away dotted Rt. 30 during the familiar pilgrimage to the foot of the Laurel Highlands.

The Steelers' roster isn't the only thing that's undone gone major changes over the past 30 months. Some of the local businesses that relied heavily on the influx of fans each summer have shuttered. Saint Vincent itself has undergone a significant makeover, with the cafeteria completely remodeled among other things.

It's in that cafeteria and the maze of dorms and hallways where the kind of cohesion not easily replicated back in Pittsburgh will take place. For safety Minkah Fitzpatrick, who recently signed a new contract that made him the highest-paid player at his position in the league, Saint Vincent brings to mind the annual retreat his high school team in New Jersey made every summer.

“It takes away any distraction,” he said. “It allows us to focus on football, allows you to focus on your teammates and really just come together and work.”

And there is plenty to do before the team breaks camp in mid-August. For the first time in nearly 20 years, the Steelers head into the fall without quarterback Ben Roethlisberger, who retired in January after 18 seasons and two Super Bowl wins and a Hall-of-Fame bust all but assured. Mitch Trubisky enters camp atop the depth chart, with rookie first-round pick Kenny Pickett serving as the understudy. For now anyway.

There are new faces along the offensive line and scattered across the defense too. Defensive end Stephon Tuitt walked away at 29 in the spring, with the Steelers signing Larry Ogunjobi — who was with the Browns in 2019 when he shoved Pittsburgh quarterback Mason Rudolph during the now-infamous brawl between the two rivals that ended with Cleveland star Myles Garrett getting suspended for ripping off Rudolph's helmet and swinging it at him — as Tuitt's replacement.

Ogunjobi, wearing a sweatshirt that read “They hold grudges for problems they caused," said Rudolph reached out to him after Ogunjobi signed to make sure there would be no issues going forward.

Call it a symbolic gesture for two players on a team that has turned honoring the past and pointing toward the future at the same time an art form.

The familiar rhythm of camp at Saint Vincent is back, in all of its somewhat uncomfortable glory.

“This is what we dreamed of as kids,” star outside linebacker and reigning AP Defensive Player of the Year T.J. Watt said. “So don’t think for a second that you’re better than that because you’re not.”

NOTES: The Steelers signed former Tennessee Titans running back Jeremy McNichols to a one-year deal on Tuesday and waived running back Trey Edmunds ... Fitzpatrick will begin camp on the Non-Football Injury list after hurting his wrist during his vacation. DE Tyson Alualu was placed on the Physically Unable to Perform list with a knee issue Tomlin blamed on overtraining.