Working hard or hardly working? Najee Harris says it's both 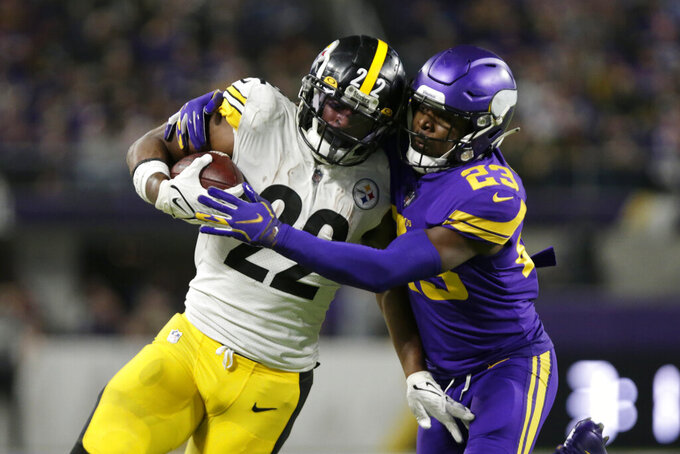 PITTSBURGH (AP) — Najee Harris is getting tired of being asked if he's tired.

The last the Pittsburgh Steelers rookie running back checked, he was drafted to do exactly what he's doing: carrying the load for a team trying to win. So what if his 279 touches lead the NFL? So what if there's still four games to go?

Leave the hand-wringing over how much is too much for others. The 23-year-old Harris wants no part of it.

“I think (some people) fall into a stereotype that there’s only so many hits on a running back,” Harris said Friday. “I don’t believe in that at all. I feel like I train for stuff like this.”

“That was a fast turnaround,” Harris said. “That was one of the struggling things I had this year, just to get my body back in shape fast.”

Harris will typically treat himself to multiple massages during the week to help his 6-foot-1, 232-pound frame recover. Rather than spread them out, he was forced to cram them into the 72-hour window after a draining victory over Baltimore on Dec. 5. It was less than ideal but then again, he's well aware the NFL schedule wasn't designed for his enjoyment.

To be fair, Harris hardly looked gassed in a 36-28 loss to Minnesota on Dec. 9. He ran 20 times for 94 yards and caught three passes for 10 more and a touchdown. His 1,270 total yards are the most by a Steelers rookie and there are times when he's been nearly the entirety of the Pittsburgh offense.

Harris is fine with that arrangement. It's what he signed up for. Yes, he's well aware of the career arc of former Pittsburgh star Le'Veon Bell, who filled a similar role during his prime from 2014-17, when he averaged 25 1/2 touches per game while making three Pro Bowls and two All-Pro teams. Bell, who is still just 29, is currently looking for work after being cut by Baltimore last month.

Is that fate awaiting Harris down the road? Maybe. He's self-aware enough to understand he sounds very much like a player who's been in the NFL all of nine months.

The Steelers (6-6-1) need him to be to have any chance at emerging from the miasma that is the AFC North. Pittsburgh hosts AFC South-leading Tennessee (9-4) on Sunday with no wiggle room left for a return to the playoffs for a second straight season.

The Titans have the NFL's third-ranked run defense and Harris - for all of his charisma and toughness - is playing behind a makeshift offensive line that has struggled to consistently generate any push. Pittsburgh running backs are averaging 1.9 yards before contact, 31st in the league.

Translation? Harris is often having to do a lot of his own dirty work to make something happen. He runs with a tenacity that's earned him the respect of his older teammates and there's little evidence he's worn down. Ask him how his body responded when it found itself on the field against Minnesota less than 100 hours removed from facing Baltimore and Harris just smiles.

Harris insists he's been planning for this all along. The key is the work he puts in during the offseason. The monotony of the draining workouts he endures during the spring is paying off now. He's fresh. Or at least as fresh as can reasonably be expected.

“I invest a lot in my body from cryotherapy, from yoga, from training a lot, from doing a lot of dry needling, from doing all type of stuff to recover well,” he said. "I think it really is how you approach it . .. If you want to master something, you have to train at it. I feel like you can train at carrying the load.”

NOTES: CB Joe Haden was a full participant in practice Friday; there's a chance his sprained foot has recovered enough for him to play for the first time since mid-November. ... LB T.J. Watt will play after exiting the loss to Minnesota in the first half with a lingering groin injury. Watt said the short turnaround between the Ravens and Vikings games played a factor in aggravating an injury that's plagued him since mid-September.