49ers post-Super Bowl struggles all too familiar for Rams 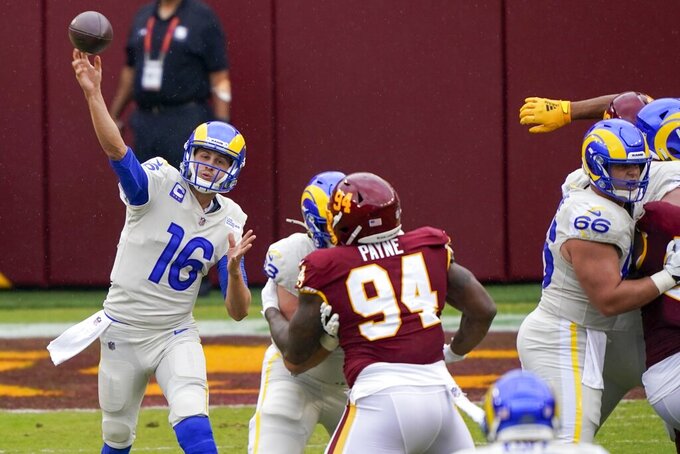 SANTA CLARA, Calif. (AP) — The offense is struggling, the defense has regressed and the injuries are mounting for the San Francisco 49ers.

Whether it’s a Super Bowl hangover or some other reason, the 49ers are having a hard time matching last year’s success.

It’s something that’s all too familiar to the Los Angeles Rams, who dealt with similar issues last year when they missed the playoffs a year after losing the Super Bowl.

“Every year presents new challenges,” Rams coach Sean McVay said. “I think five games is a real small inventory to write the narrative yet. I know that these guys will be ready to go. I know what great coaches, what great players they have.”

McVay just hopes the Niners don’t get back to their 2019 form this week when the Rams (4-1) come to town for a Sunday night showdown against San Francisco (2-3).

They managed to overcome some of those in back-to-back blowout road wins against the New York Jets and Giants. But things have fallen apart the past two weeks in home losses to Philadelphia and Miami.

Backup Nick Mullens committed three fourth-quarter turnovers in the loss to the Eagles that Garoppolo missed with a sprained ankle.

Garoppolo returned last week and went 7 for 17 for 77 yards and two interceptions before getting pulled at halftime in a 43-17 loss to the Dolphins that was the most lopsided home defeat for the Niners in 11 years.

Now they have little time to get things right if they want to get back into contention in the NFC.

“I don’t feel like our pride is down or anything,” safety Jimmie Ward said. “If anything, we should be angry because we want to get a win. That’s about it.”

San Francisco has allowed five sacks in consecutive games for the first time in six years and now has to deal with Aaron Donald and the Rams. Los Angeles is tied for the league lead with 20 sacks so far after getting eight in last week’s win at Washington. Donald has led the way with 7 1/2, including four last week. Donald has a sack in six straight meetings with San Francisco.

“He’s going to be a guy that’s all over the formation,” tackle Mike McGlinchey said. “He’s going to line up outside, inside, anywhere he wants and he’s going to cut it loose. That’s who he is and that’s how he causes problems. We’re definitely going to have to be on it.”

The Rams finally broke out the deep ball against Washington, with Jared Goff finding Robert Woods for a 56-yard touchdown pass in the second quarter. It was Goff’s longest scoring throw based on yards traveled through the air since Week 4 of the 2018 season, with the added benefit of ending constant questions from the Los Angeles media about a lack of explosive pass plays.

“I think we’ve had plays that have long throws available, they just haven’t been there,” Goff said. “This week it was there. It was open and I took advantage of it. I don’t know if we can give you guys that much credit, but maybe a little bit.”

Perhaps the only bright side for the 49ers from last week’s loss to the Dolphins was the return of running back Raheem Mostert from a knee injury that sidelined him for two weeks. Mostert broke off a 37-yard run and finished with 11 carries for 90 yards. He added 29 yards receiving and has topped 100 yards from scrimmage in all three games he has played this season.

“I thought he was probably the best football player on the field on Sunday and wish we could have got the ball to him more,” coach Kyle Shanahan said. “But you could tell he was ready to go.”

The decision to cut Todd Gurley in the offseason hasn’t hindered the Rams’ ability to run the ball. They have 698 yards on the ground, Los Angeles’ best five-game total to start a season since 1987, led by the backfield trio of Darrell Henderson, Malcolm Brown and Cam Akers. However, McVay thinks his rushing offense can be even better.

“I’m more interested in the efficiency of what those rushing yards entail,” McVay said. “Is it leading to points? Are we sustaining drives? Are we converting when we have to? I think there’s been some good and then there’s been some things that we expect to be better.”

Jalen Ramsey is still on the lookout for his first career sack, but the Rams cornerback is getting more chances to rush the passer for new defensive coordinator Brandon Staley. Ramsey is getting snaps as the “star,” a hybrid safety-linebacker that can play closer to the line of scrimmage.

“I see him like a LeBron James is used in the basketball court, where he’s a position-less player,” Staley said.

Shanahan became known last year for wearing a red trucker’s hat that he said his wife wouldn’t let him change because it was bringing the team good luck. Shanahan switched to a gray cap this year that hasn’t led to as much success. But that hasn’t led to calls from home for him to change back.

“They are superstitious, but they know winning games comes to playing good football and we’ve got to play better football,” Shanahan said. “If I thought the color of my hat would help us where it play better football, I promise you I would never take that off. I understand the question. But I live a little more in reality than that.”