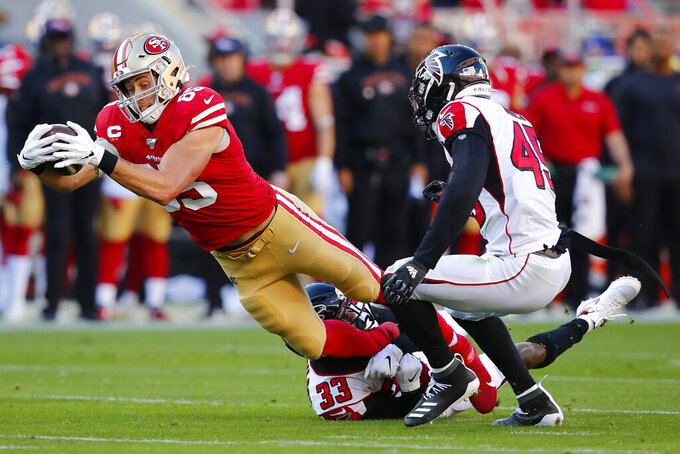 FILE - In this Dec. 15, 2019, file photo, San Francisco 49ers tight end George Kittle, left, runs against Atlanta Falcons defensive back Blidi Wreh-Wilson (33) and linebacker Deion Jones (45) during the first half of an NFL football game in Santa Clara, Calif. Kittle has agreed to a five-year extension with the San Francisco 49ers that reportedly is the richest contract ever at the position. A person familiar with the deal says the sides agreed Thursday, Aug. 13, 2020, on the deal to keep Kittle off the market next offseason. (AP Photo/John Hefti, File) 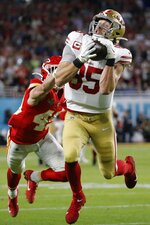 All-Pro tight end George Kittle has agreed to a five-year, $75 million extension with the San Francisco 49ers that is the richest contract ever at the position.

A person familiar with the deal says the sides agreed Thursday on the deal to keep Kittle off the market next offseason. The person spoke on condition of anonymity because the contract hadn’t been announced by the team.

Locking up Kittle was a high priority this offseason for the Niners and they were able to get it done two days before the first full team practice at training camp.

Kittle had been one of the NFL’s biggest bargains after being drafted in the fifth round in 2017 and now he gets the biggest contract ever at the position. The previous high for annual value on a multiyear contract for a tight end, according to overthecap.com, was the $42 million, four-year deal Austin Hooper signed this offseason in Cleveland.

Hunter Henry is playing this season for the Chargers on a $10.6 million franchise tag.

The Niners could have used the tag on Kittle the next two offseasons, but instead managed to work out a long-term deal that satisfied both sides.

Kittle has been the most productive tight end in NFL history through his first three seasons with 197 catches for 2,664 yards. But he is almost equally as skilled as a blocker in the run game where he is a key piece in coach Kyle Shanahan’s dynamic offense.

After a solid rookie season, Kittle broke through in 2018 when he set an NFL record for yards receiving in a season for tight ends when he had 88 catches for 1,377 yards and was named a second-team All-Pro.

He was almost as productive last season despite missing two games with injuries when he had 85 catches for 1,053 yards and was a first—team All-Pro. He also was a major reason the Niners went 13-3 on the way to a Super Bowl appearance.

It has been quite a start to a career for a player who caught only 48 passes in 25 college games at Iowa, leading him to fall to the fifth round of the draft.

By Josh Dubow 4 hrs ago
By Teresa M. Walker 7 hrs ago
9 hrs ago
By Arnie Stapleton 8 hrs ago
By Steve Megargee 10 hrs ago