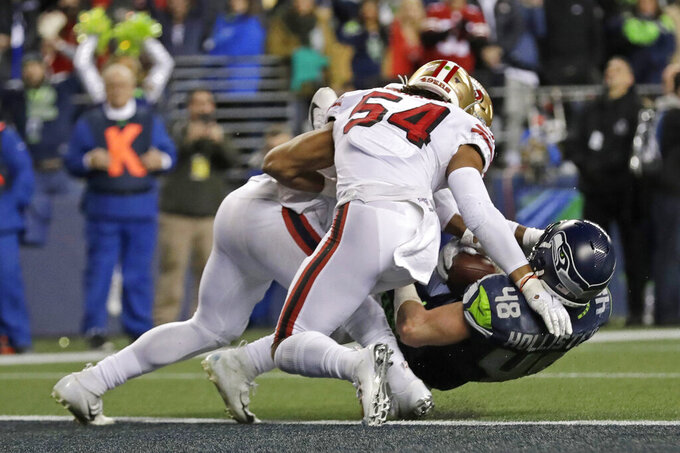 RENTON, Wash. (AP) — Based on his conversations with the NFL, Seattle coach Pete Carroll believes the league wishes there had been pass interference called on the field against San Francisco's Fred Warner late in the Seahawks' loss to the 49ers last week.

Carroll was asked again Wednesday about the third-and-goal pass intended for tight end Jacob Hollister in the closing seconds of the 26-21 loss to San Francisco. Carroll indicated earlier in the week he wanted clarification from the league about what they saw on the play and the decision not to flag Warner on the field or have a more extensive review of the play by replay officials in New York.

"It’s difficult for those guys to put a flag down on the field. It’s got to be so egregious that there’s a standard to it. Had it been called on the field, they never would’ve overturned that from what I understand.”

While Seattle had its chance to make the no-call a moot point — namely not being called for delay of game at the 1-yard line — the lack of a flag and decision not to stop the game for a review became another talking point in a season of scrutiny for the league's officiating.

Al Riveron, the league's head of officiating, said after Sunday's game the play was looked at in New York and it was determined not to stop the game for a longer review.

“Nothing happens that rises to the level of a foul while the ball is in the air before it gets there by either player,” Riveron said.

Hollister did make the catch on the next play but was stopped inches short of the goal line by Dre Greenlaw.

“It's obviously a play that I wish would have been called, but everybody makes mistakes," Hollister said. "You're not going to get every call and I didn't get that one.”