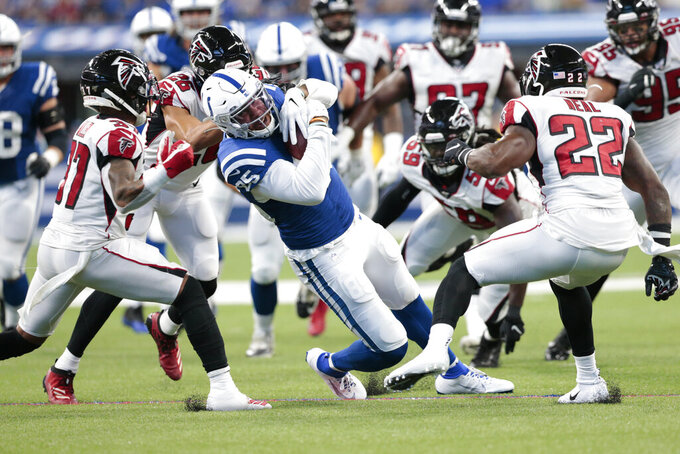 FLOWERY BRANCH, Ga. (AP) — Keanu Neal will miss the remainder of the season with a torn left Achilles tendon, taking the strong safety away from the Atlanta Falcons' defense for the second straight season.

Neal suffered a season-ending knee injury in the 2018 opening game. He worked most of the year in rehab before suffering another crushing injury in Sunday's 27-24 loss at Indianapolis.

He said he can't imagine having to deal with another serious injury.

"You're just getting back," Allen said. "He's finally hitting his stride and finally getting a good feel. That just sucks for him. I feel so bad for him."

Allen said he'll provide advice after recovering from his injury.

"I'm here for him, whatever he needs," Allen said. "It's a long journey for him. He understands the journey. ... It's a daily thing and it's never over."

Kemal Ishmael likely will replace Neal in the lineup for Sunday's game against Tennessee, though Quinn said a revised defensive plan will involve more than one replacement.

"He'll bounce back but I know how hard he worked to get here so I'm definitely bummed for him," Quinn said.

Neal, a 2016 first-round draft pick, was a Pro Bowl selection in 2017, when he had 113 tackles with three forced fumbles and one interception.

Quinn said the Falcons will have free-agent safeties at the facility for workouts this week but may call up a player from the practice squad.

Running backs Ito Smith and Kenjon Barner are in concussion protocol, creating an opening for Brian Hill to move up as Devonta Freeman's backup.

Quinn said he hopes defensive tackle Grady Jarrett (toe) will be available for practice late in the week.