Floyd hopes to find own path in Fowler's footsteps with Rams 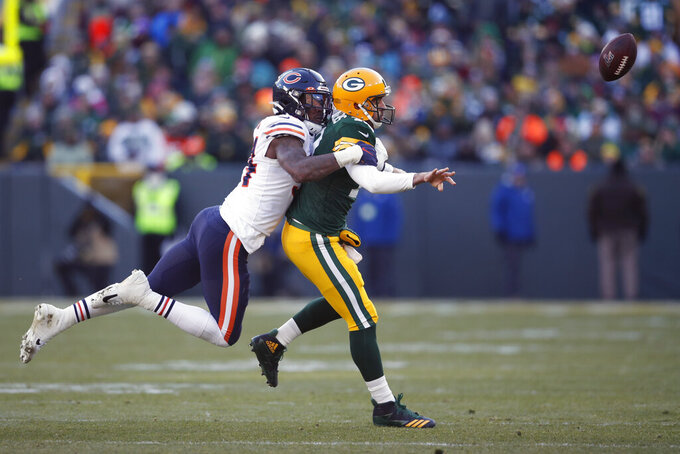 FILE - In this Dec. 15, 2019, file photo, Green Bay Packers quarterback Aaron Rodgers (12) tries to avoid Chicago Bears outside linebacker Leonard Floyd (94) during an NFL football game in Green Bay, Wis. Floyd moved from Chicago to Los Angeles for the chance to realize his full potential as a pass rusher with the Rams. (AP Photo/Jeff Haynes, File)

LOS ANGELES (AP) — Although the blueprint drawn by Dante Fowler last season doesn't precisely fit Leonard Floyd, it's plenty close enough to thrill Floyd about the chance to turbo-charge his career with the Los Angeles Rams.

In just 1 1/2 seasons with the Rams, Fowler transformed himself from another team's underachieving top-10 pick into an elite NFL pass rusher who landed a $45 million free-agent contract from Atlanta last month.

Fowler's pass-rushing replacement in Los Angeles could be Floyd, another top-10 pick who hasn't reached the success and stardom expected of him.

The Chicago Bears released Floyd in March after four seasons of steadily declining pass rush production. He landed a $10 million deal to move to Los Angeles for the chance to maximize his potential by following Fowler's well-worn path to opposing quarterbacks.

“I don’t feel pressure to match (Fowler's) level,” Floyd said Monday in a video conference call. “I just want to come in and play at my level and try to help the team win games, trying to dominate on defense.”

Fowler and Floyd have similar circumstances in LA, but they're not the same player. For starters, Floyd is taller and lankier than Fowler, who finally channeled his tremendous physical gifts into a career-high 11 1/2 sacks and 16 quarterback hits last season.

Floyd's own gifts are obvious, but he has been more effective as a run stopper than as a pass rusher. That's not what the Bears likely expected from the No. 9 overall pick, who had just three sacks and three tackles for loss last season.

“I’m a guy that can do more than one thing on the field,” Floyd said. “I can set the edge in the run. I can drop in coverage, and I’m coming to LA to continue to work on my pass rush, to elevate that even more.”

Floyd's versatility and eagerness to improve attracted the Rams to take a chance on him. The Rams’ pass rush also took an additional hit when they dropped veteran linebacker Clay Matthews and his eight sacks, leaving Floyd with ample opportunity to play this fall.

They also have inside knowledge of Floyd's potential from Brandon Staley, his former position coach in Chicago.

Fowler thrived under veteran Rams defensive coordinator Wade Phillips, who was subsequently fired by Sean McVay after three straight winning seasons. McVay replaced Phillips with Staley, who has never been an NFL coordinator.

But Staley was the Bears' outside linebackers coach in 2017-18, forging a solid bond with Floyd in the process. Staley left Chicago last season to follow Vic Fangio to Denver, and Floyd is confident he already knows his role in the Rams' new defense.

“I believe Coach Staley is going to use some of the same things that he learned from Coach Vic and bring it to LA, and then go out and dominate,” Floyd said.

The 37-year-old Staley, who was coaching at Division III John Carroll in 2016, was an out-of-nowhere choice to take over the Rams’ defense to many Rams observers — but not to Floyd.

“I was expecting him to be a D coordinator, sooner rather than later,” Floyd said. “I was happy for him when I found out he got the job. I knew he was going to go in and do it the right way.”

Playing alongside Aaron Donald was a huge help in Fowler’s career year last fall, but Fowler deserved most of the credit for absorbing the Rams’ coaching and realizing his potential.

Floyd goes from playing alongside Khalil Mack in Chicago to lining up with Donald in Los Angeles, and he's already excited about the chance to thrive alongside another pass rushing great.

“I'm going to come in and just try to be there at the right time before he gets (to the quarterback), because you know he’s coming,” Floyd said with a laugh. “Hopefully a couple of them will fall in my lap.”