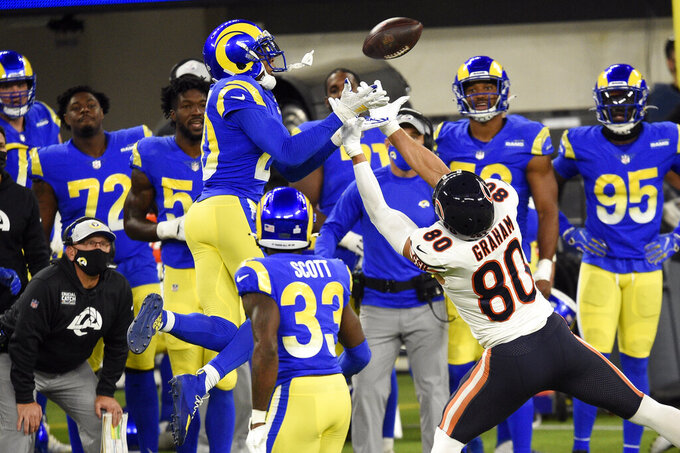 LOS ANGELES (AP) — The Los Angeles Rams' offense is producing at a steady rate, and their defense appears to be improving on its already strong start.

Now that they've proven they can even beat a winning team, Sean McVay's club deserves to be feeling fairly confident as the Rams (5-2) head into the tougher portion of their schedule.

Los Angeles' defense put on a superb performance during a 24-10 victory over the Chicago Bears on Monday night in which Aaron Donald and his teammates came up with one big play after another. The offense was less flashy — perhaps no surprise, given the Bears' own daunting defense — but still did more than enough to ensure a comfortable win.

After finally beating an opponent with a winning record, the Rams can turn toward the playoff race, where they'll find out whether the defense can be this successful against the league's top offenses.

Los Angeles yielded just 279 yards and three points to the low-powered Bears, moving up to sixth in the NFL in yards per game allowed. Only Baltimore has allowed fewer points per game this season than the Rams (17.7), who have only allowed 33 total points in the second halves of their seven games.

“It's hard to say it wasn't as good as they've played (all season)," McVay said Tuesday. “But to the defense's credit, they've had some pretty dominant performances this year. As a whole, our defense has been pretty outstanding for the most part, and (Monday) was a reflection of what we've seen through the first seven games fairly consistently.”

The Rams' defense was particularly strong on passing plays against Chicago even though Nick Foles was a respectable 28 of 40 for 261 yards. Los Angeles had 21 pressures on Foles, including eight quarterback hits and four sacks, while pressuring him on 37% of his dropbacks, according to the league’s Next Gen Stats. Donald got credit for eight pressures by himself, and Leonard Floyd had six along with his two sacks. Troy Hill and Taylor Rapp combined for an end-zone interception that stopped arguably the Bears' best drive, and Jalen Ramsey sealed the win late with an athletic interception at midfield.

The Rams managed 11 net yards on 15 plays in the fourth quarter while trying to sit on their big lead, and McVay didn't seem happy with his running game's effectiveness down the stretch.

“I think we’ve got to execute better in some of those four-minute situations, even if it starts late in the third and early in the fourth quarter where you’re in the last 20 minutes of the game, just trying to run the clock out and get away with a win,” McVay said.

Floyd had his biggest game since joining his new club, applying regular pressure on the edge and making six tackles. After four years of declining sack totals in Chicago, he appears to be growing into the Dante Fowler role on the Los Angeles defense as a persistent pass rusher who knows how to capitalize on Donald's disruptions. Floyd's four sacks trail only Donald's eight for the team lead.

Rookie kicker Samuel Sloman's seven-game tenure ended with his release Tuesday. The seventh-round pick missed three extra points and three field goal attempts, including a low 48-yarder that was blocked by Chicago. He had the worst field goal success rate for any Rams kicker with at least 10 attempts since 1995. Veteran Kai Forbath, a Los Angeles-area native, is already signed to take over this week.

Rookie safety Terrell Burgess is out for the season with a broken ankle that will require surgery Wednesday. He was taken off the field on a cart in the second half with an air cast around his left leg. The Utah product was beginning to make an impact on defense in the absence of injured Jordan Fuller, a fellow rookie who won a starting job in camp.

McVay said the Rams intend to activate defensive tackle A'Shawn Robinson for his debut this weekend, and they're hopeful tight end Tyler Higbee will be back after missing the win over Chicago with a hand injury.

5 — The number of punts dropped on or inside the Chicago 10 by four-time Pro Bowl punter Johnny Hekker, pinning the Bears deep in their own end to begin nearly half of their drives. The Bears' best starting drive position all night was the Chicago 38. “He was phenomenal,” McVay said of Hekker. “Exactly what we expect. We don’t ever take it for granted.”

A short week of preparation for a fourth road trip to the East Coast in the past seven weeks. The Rams' defense gets a unique test at Miami (3-3) for the debut start of Tua Tagovailoa, the Alabama product already being heralded as the Dolphins' savior. Donald and his mates will see if they can delay the coronation.