The Latest: NFC East will produce sub-.500 champ next week 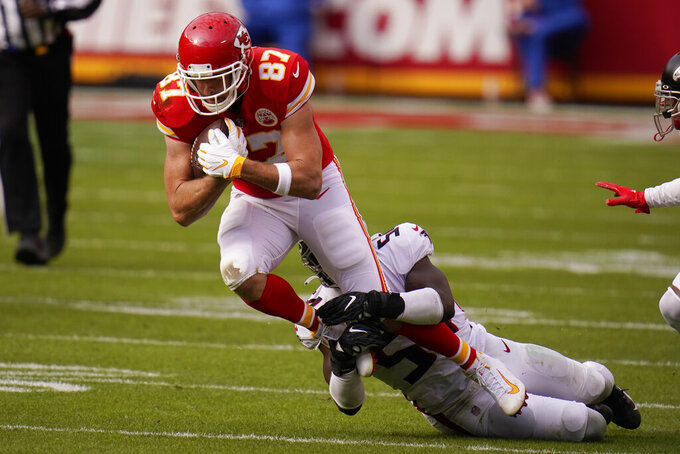 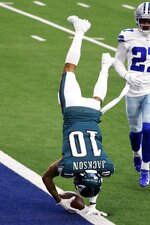 For the first time since 2014 there will be an NFL playoff team with a losing record.

The NFC East race comes down to Week 17. Washington is 6-9 and will win the division by beating Philadelphia.

The Dallas Cowboys are also 6-9. To get in, they’ll have to beat the Giants and the Eagles would have to beat Washington.

The Giants are 5-10 but would get into the playoffs with a win over Dallas and a Washington loss.

The last team to win their division with a losing record was the Carolina Panthers in 2014. They won the NFC South at 7-8-1 that year and beat an 11-5 Arizona team at home in the wild-card round before losing to Seattle.

Washington could have clinched the division Sunday but lost to Carolina 20-13.

The Dwayne Haskins era very well may be over in Washington, after Ron Rivera pulled his starting quarterback with nine minutes left against Carolina.

Taylor Heinicke entered at QB with Washington trailing the Panthers 20-6. His last NFL action came in 2018 with the Panthers.

Haskins got his second consecutive start for Washington with quarterback Alex Smith out again because of a right calf injury. Haskins got the nod less than a week after being fined $40,000 and losing his captaincy for violating COVID-19 protocols.

The Dallas Cowboys have rallied for a 30-17 third-quarter lead against Philadelphia thanks to a pair of touchdowns from receiver Michael Gallup in the second quarter.

Gallup’s 7-yard scoring catch the play after a 19-yard toe-dragging grab put the Cowboys up 20-17 at halftime after the Eagles had gone ahead 14-3 in the first quarter on DeSean Jackson’s 81-yard touchdown.

The Cowboys answered Jackson’s long TD with Andy Dalton’s 21-yard TD toss to Gallup. The third-year receiver had six catches for 121 yards in the first half while Dalton was 16 of 20 for 224 yards.

The winner will remain alive in the NFC East playoff race if Washington loses to Carolina.

Washington is trailing 20-6 in the fourth quarter.

Washington is well on the way to blowing its first chance to clinch the NFC East.

Dwayne Haskins turned the ball over three times in the first half, and Carolina leads Washington 20-3 late in the third quarter. Haskins lost a fumble and threw two interceptions, is 6 of 15 and has a paltry 8.3 QB rating.

After the Giants lost to the Ravens, Washington just needed to win to wrap up the division. Instead, the defense allowed two touchdown drives and punt returner Steven Sims muffed a catch that became Panthers touchdown to trail by 17.

The Seattle Seahawks and Los Angeles Rams are tied 6-6 at halftime in a matchup that could decide the NFC West.

Seattle will claim the division for the first time since 2016 with a victory. But the Seahawks been held to a pair of Jason Myers field goals in the first half. Myers has made 33 consecutive field goal attempts dating back to last season after connecting from 45 and 49 yards in the first half.

Russell Wilson has only 84 yards passing and was sacked three times.

The Rams need a win to clinch a playoff berth. Matt Gay has hit field goals of 44 and 51 yards, but Jared Goff’s careless interception late in the second quarter cost Los Angeles a chance at the halftime lead.

Eleven teams in the NFC are still harboring hopes of making a playoff run with Week 16 winding down.

The AFC playoff picture is coming into focus with the Kansas City Chiefs wrapping up the top seed thanks to a 17-14 squeaker over Atlanta.

The Pittsburgh Steelers overcame a 24-7 deficit to rally past the Indianapolis Colts 28-24 and secure the AFC North crown.

So, for now, the Steelers are the No. 2 seed and AFC East champion Buffalo is sitting at No. 3 followed by Tennessee, which takes a 10-4 record into Green Bay on Sunday night.

Also in contention for AFC playoff spots are Miami, Baltimore, Cleveland and Indianapolis. The Colts (10-5) are on the bubble after blowing that 17-point lead at Pittsburgh.

In the NFC, the Packers will wrap up the top seed with a win over the Titans. The Saints, Seahawks and Buccaneers are also in.

In the hunt are Washington, the Rams and the Bears. And the Cardinals, Cowboys, Giants and Eagles are all on the bubble.

The Buffalo Bills were informed Sunday morning that running back T.J. Yeldon has tested positive for COVID-19.

Yeldon was placed on the reserve/COVID-19 list and will not travel and play in Monday night’s game at New England.

Yeldon has appeared in just three games this season.

DeSean Jackson’s return for Philadelphia is off to a flying start.

The 13th-year receiver caught an 81-yard touchdown pass from rookie Jalen Hurts against Dallas in his first game back after missing two months with an ankle injury. Jackson finished off his fifth career touchdown of at least 80 yards with a forward flip into the end zone as the Eagles took a 14-10 lead in the first quarter.

Jackson beat Chidobe Awuzie on a deep crossing route, then turned the other direction after stepping out of Awuzie’s attempted tackle. He slowed considerably around the 10-yard line with Trevon Diggs in pursuit before the flip into the end zone. It was his first touchdown of an injury-plagued season and the 56th of the 34-year-old’s career.

Jackson’s most recent touchdown of at least 80 yards was an 80-yarder from Kirk Cousins four years ago. His career long is 91, from Michael Vick in 2010.

The winner of the Dallas-Philadelphia game will remain alive in the playoff race if Washington loses to Carolina.

Justin Herbert set the record for most TD passes thrown by a rookie quarterback to give the Los Angeles Chargers a 10-0 lead over the Denver Broncos.

Herbert threw a 9-yard screen pass to Austin Ekeler with 8:23 remaining in the second quarter. It is his 28th of the season, surpassing the 27 that Baker Mayfield had for the Cleveland Browns in 2018.

Denver’s Brandon McManus did something that few kickers could accomplish even if they tried — hit the left upright on two straight field-goal attempts during the second quarter against the Los Angeles Chargers.

McManus’ first 42-yard attempt hit the upright, but the Chargers were called offside. McManus though was unable to make the most of his second chance, as his 37-yard attempt suffered the same fate.

The Chargers took an early 3-0 lead.

The Kansas City Chiefs will stay at home throughout the AFC playoffs after holding off the Atlanta Falcons and the Pittsburgh Steelers ended a three-game losing streak and clinched the AFC North after rallying past the Indianapolis Colts. The Colts' loss also allowed the Ravens to control their own playoff fate after beating the New York Giants. If the Ravens win at Cincinnati next week, they are in the playoffs.

Over in the NFC, the Chicago Bears routed the Jacksonville Jaguars and will reach the playoffs if they beat the Green Bay Packers next week.

Washington’s attempt to win and clinch the NFC East is off to a rough start.

Washington trails Carolina 6-0 late in the first quarter after Steven Sims fumbled a punt return and Panthers special teamer Brandon Zylstra recovered in the end zone. Joey Slye missed the extra point. Dwayne Haskins, who started for Washington in place of Alex Smith despite violating COVID-19 protocols, started 0 of 4 with a lost fumble.

The Kansas City Chiefs have secured the AFC's top seed in the playoffs after escaping with a 17-14 win over the Atlanta Falcons when Pro Bowl kicker Younghoe Koo sliced a 39-yard field goal with nine seconds left that would have tied the game.

The Chiefs are now 14-1 and will get the AFC's bye in the new seven-team playoff format.

The Chiefs have won 10 in a row, including seven straight by six points or fewer.

The Chiefs' 28-game streak of scoring 20 or more points came to an end. It was just the second time in 58 games going back to 2017 that Kansas City was held under 20 points.

New York Jets running back Frank Gore has become the third player in NFL history to run for 16,000 yards.

The 37-year-old Gore joined Pro Football Hall of Famers Emmitt Smith and Walter Payton to reach the milestone, doing so with a 4-yard run in the fourth quarter of New York’s game against Cleveland on Sunday.

He played in his 240th NFL game last Sunday at Los Angeles against the Rams, surpassing Lorenzo Neal for the most by a running back in league history.

The third-leading rusher in NFL history scored his 100th touchdown last week, tying Pro Football Hall of Famers Curtis Martin and Franco Harris for 11th-most by a running back.

Kelce has exactly 1,400 yards receiving. Kittle set the record two years ago with 1,377.

Kelce has seven catches for 98 yards and touchdown against Atlanta.

The Chiefs lead the Falcons 17-14 with just under two minutes remaining in Kansas City.

Travis Kelce is the first tight end in NFL history with two 100-catch seasons. His milestone came when he hauled in his second pass against the Atlanta Falcons on Sunday during a touchdown drive just before halftime.

Kelce had a club-record 103 catches two years ago and 97 last season, when he helped the Chiefs end a 50-year championship drought.

He began the day with 98 catches for 1,318 yards and 10 touchdowns — he trailed the Cardinals’ DeAndre Hopkins for the league lead in yards by six.

Kelce added his 11th TD catch of the season late in the second quarter to forge a 7-7 tie with the Falcons. The pass also extended Patrick Mahomes’ club record to 26 straight games with a touchdown throw, the longest active streak in the NFL.

The Chiefs were in danger of getting shutout in the first half for the fist time since Week 4 of 2016 until Mahomes hit Kelce with the touchdown throw with just 30 seconds left in the second quarter.

A day later, Brady responded with a 2010 AP Photo of James about to dunk the ball in a game at Milwaukee with teammate Dwyane Wade reacting.

Brady led the Bucs past Detroit 47-7, which ended Tampa Bay’s long playoff drought that dated back to the 2007 NFC wild card round.

Brady will be making his 12th consecutive playoff appearance.

Brady's old team, the New England Patriots, are missing the playoffs for the first time since 2008.

It’s Week 16 and 19 teams still have hopes of reaching Tampa for Super Bowl 55 of Feb. 7, including the Philadelphia Eagles who have won just four games this season.

Buffalo, Kansas City and Pittsburgh have already clinched spots in the AFC playoffs.

In the NFC, Green Bay, New Orleans, Tampa Bay and Seattle are in.

There are only two first-round byes this year and the Chiefs could clinch the AFC’s top seed with a win over Atlanta.

The Packers could clinch the No. 1 seed in the NFC with a win Sunday night against the Titans and a Seattle loss or tie. The Seahawks play the Rams.

There are 11 NFL games on Sunday’s slate, the third of four consecutive days of action in Week 16.

The Saints, Buccaneers, 49ers and Dolphins have already won this weekend with Tampa Bay securing a playoff berth with a 47-7 whipping of the Detroit Lions on Saturday.

The last time the Buccaneers made the playoffs was in 2007.

The playoff picture could come into greater focus Sunday with several teams trying to reach the postseason, including the Cleveland Browns, who haven’t reached the playoffs since 2002.

Playoff berths are also on the line for the Colts and Titans in the AFC and the Cardinals, Rams, Seahawks and Washington in the NFC.

Washington's last trip to the playoffs came in 2015.