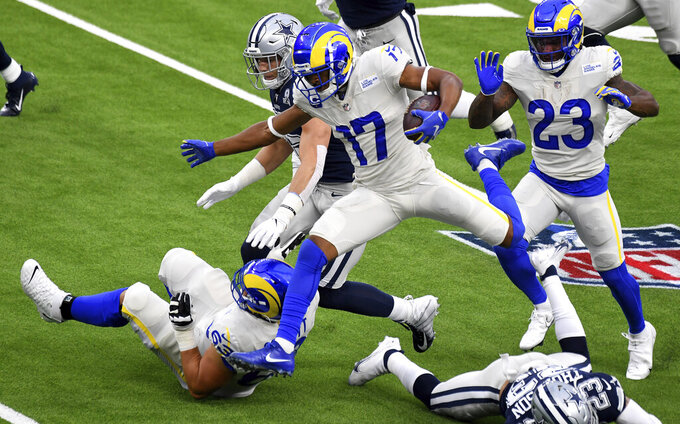 Wide receiver Robert Woods (17) of the Los Angeles Rams leaps for the first down against the Dallas Cowboys in the first half of a NFL football game on opening night at SoFi Stadium in Inglewood on Sunday, September 13, 2020. (Keith Birmingham/The Orange County Register via AP)

LOS ANGELES (AP) — Robert Woods is off to another strong start with the Los Angeles Rams in a career that has always exceeded expectations, and his team is planning to reward him for it.

Rams coach Sean McVay on Thursday all but guaranteed Woods will get a contract extension soon, keeping another franchise cornerstone in his native Los Angeles for the long term.

That was exactly what Woods wanted to hear. Later Thursday, he made a public request for a bigger deal, saying it was “just urgent. As soon as possible."

The 28-year-old Woods is already signed through 2021 in a deal that pays him $9 million next season, but the Rams have repeatedly said they want to bump up Woods' pay to a level commensurate with his achievements and leadership. Woods led the NFL last season with 577 yards after the catch while racking up 1,134 yards receiving on a career-high 90 receptions.

“We want to get (Woods) extended, too,” McVay said. “He’s a huge part of what we’re doing. That’s something I think is definitely important. ... Robert and Cooper have been pillars of what we’ve done the last few years. It’s great to get Cooper under contract. I’m so happy for him, and you can expect to see something similar down the line here very shortly we’re working toward for Robert.”

Woods is also eager to sign a new deal before the Rams head to Philadelphia this weekend to face the Eagles, but the sides aren't quite finished yet.

“Hopefully it gets done,” Woods said. “It’s been in the talks. Just praying that it gets done on time. Really just trying to go out there and execute and let my play do my talking on my field for me, which it has.”

Woods was immediately in top form in the Rams’ 20-17 victory over Dallas in the inaugural game at SoFi Stadium last week. He had six catches for 105 yards, including a 20-yard grab on the first play from scrimmage at SoFi, and he added a 14-yard run.

Woods' speed, consistency and precision have made him one of the NFL's most productive receivers since he joined his hometown Rams in 2017 from Buffalo, where he spent his first four seasons. Woods got a five-year, $34 million deal to come to LA, but the Rams already bumped up his salary early in the contract when it was clear he was outperforming the deal.

The Southern California product immediately took to McVay's offense, putting up 781 yards and five touchdowns in 2017 before ramping up to a career-high 1,219 yards receiving with six touchdowns in 2018. McVay frequently targets him for receiver screens, and Woods also features regularly in the Rams' running game on jet sweeps, carrying the ball 36 times in the last two years.

Advocating for himself doesn't come naturally to a team-first guy like Woods, but he is doing it this week, albeit with a smile on his face. He laughed about the success of the Denver Nuggets, the NBA team owned by Rams owner Stan Kroenke's family business.

“This is a billion-dollar industry,” he said. “I feel like there’s always money. Even if they’re saying there’s not, there’s money somewhere. ... Denver is doing well, the Nuggets. There’s got to be a little bit of money somewhere.”

Woods' performance against the Cowboys was the 12th 100-yard receiving game of his career. He has caught at least 40 passes in the first seven seasons of his NFL career with the Rams and the Bills, who drafted him in the second round in 2013. Woods has also been healthy throughout his entire career, playing at least 12 games in every season.

The Rams' front office under general manager Les Snead has a history of rewarding its elite players with top-of-the-market contracts, even if the players don't get to stick around long enough to play them out.

In a two-year span, the Rams have given out the biggest contracts in NFL history at the time to a running back (Todd Gurley), a quarterback (Jared Goff), a defensive player (Aaron Donald) and a cornerback (Jalen Ramsey). Los Angeles also signed receiver Brandin Cooks to a lucrative extension right after trading for him in 2018, only to trade him to Houston last spring.

Ramsey got his five-year, $105 million extension during the week before the season opener, followed by a healthy extension for Kupp.