Rams defense is NFL's best, but offense required in playoffs 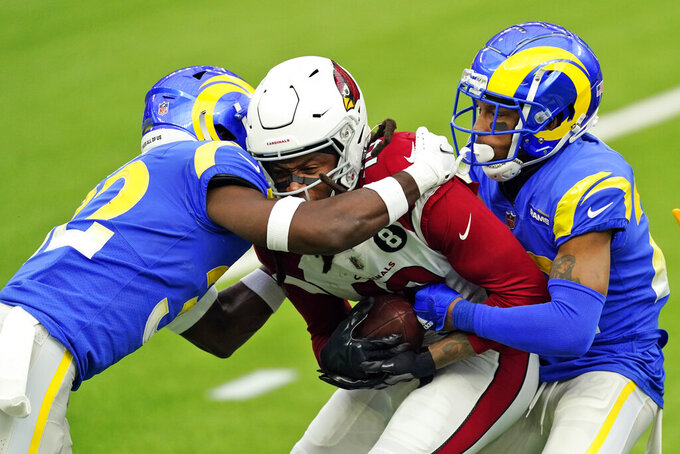 LOS ANGELES (AP) — The Los Angeles Rams' defense is undeniably the best in the NFL. Rookie coordinator Brandon Staley's group allowed the fewest points, total yards, yards passing, touchdown passes and first downs in the league this season while carrying a mediocre offense to 10 wins and a postseason berth.

The Rams probably shouldn't try to find out whether this dominant defense can win a playoff game all by itself, too.

Los Angeles (10-6) is headed to Seattle on Saturday for the second postseason meeting ever between the NFC West rivals. The Rams' defense is historically good, but it isn't resting on its achievements with a third matchup against Russell Wilson looming.

“We're happy with what we accomplished as a unit,” defensive end Morgan Fox said Monday. “It was something that was in the back of our minds. Everything in the forefront was winning games and trying to be the best team that we could be, but it is a cool achievement. I think everyone kind of saw and noticed it, but everyone is focused on Seattle and winning everything. We're pumped about it, but it's not done.”

The Rams' defensive success culminated in a strong all-around performance against Arizona on Sunday in which the LA defense outscored the Cardinals by itself, getting a safety and Troy Hill's 84-yard TD interception return in the Rams' 18-7 win.

Unfortunately, the Rams' defense also scored as many points as the Rams' offense, even with new quarterback John Wolford injecting 287 total yards and ample excitement in his NFL debut. Los Angeles' season-long struggles in the red zone have sent it into the playoffs without an offensive touchdown in two consecutive games.

That probably won't work against the Seahawks, who held Los Angeles to three field goals in a 20-9 win in Seattle on Dec. 27. The Rams outgained Seattle 334-292 in that game, but couldn't score a touchdown on five drives into Seahawks territory.

The Rams then got to the Arizona 2 on two occasions, but came away with a field goal and a goal-line fumble by rookie Cam Akers.

It's easy to discount the Rams' playoff chances because of their offensive ineptitude, but Wolford's performance created a window of optimism heading to Seattle. The inexperienced backup added two new elements to the Rams' attack with his running ability and his willingness to throw long passes — something Jared Goff does less than most starting QBs in the league, whether because of his own decisions or coach Sean McVay's play-calling.

Yet Wolford might not even be behind center against the Seahawks: It's too early to know whether Goff will be available after having thumb surgery just one week ago.

McVay chose not to speak to reporters Monday, and he equivocated about his QB situation for the upcoming week immediately after beating Arizona.

“We really put the game in (Wolford's) hands offensively, and I thought he did a nice job,” McVay said. “We want to come away with more points, but sustaining drives, keeping the defense off the field with the way they were playing all day, I was really pleased with John.”

Wolford's performance not only assuaged many worries about this week, but the rest of 2021 as well. Goff's $134 million contract probably keeps him tied to LA for at least two more seasons, but if he struggles again or gets hurt next season, McVay and Rams fans know Wolford is capable of doing the job for $855,000.

Wolford's 56 yards rushing aside, the Rams' ground game was inept against Arizona. Akers and Malcolm Brown combined for 54 yards on 24 attempts, with Akers managing only 34 yards on 21 carries. “Last night was a clear-cut example of not running the ball well,” Akers said Monday.

Fox seized a big role with Michael Brockers sidelined by COVID-19. The former undrafted free agent racked up a sack and four tackles against Arizona, including two tackles for loss to cap his best NFL season. The Rams' depth on the line has been key to everything on defense.

Both inside and outside the training complex, nobody is pining for the Rams' franchise quarterback to return with his ailing thumb to start their playoff game. That's not even a surprise after Goff's second straight middling season.

1 — The number of quarterbacks in NFL history to pass for at least 200 yards and rush for at least 50 in their NFL debuts. Wolford stands alone.

Last month, the Rams suggested 39-year-old left tackle Andrew Whitworth might be able to return this week from a torn knee ligament. They provided no updates Monday.

The Rams have no fear of the Seahawks, but beating them on a short week in the rain is a challenge for the defense, which kept Wilson's offense out of the end zone for the final 51 minutes of LA's victory in November.