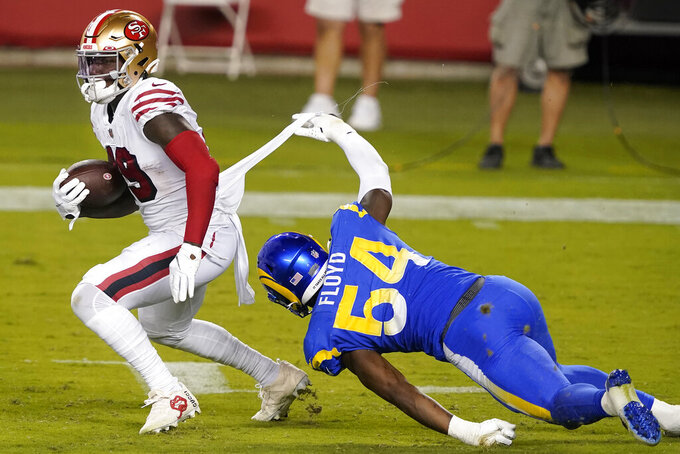 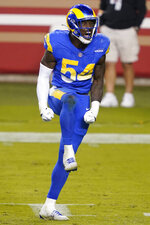 INGLEWOOD, Calif. (AP) — The Chicago Bears drafted Leonard Floyd with the ninth overall pick four years ago, envisioning him as a pass-rushing superstar who could anchor their defense for years to come.

Last March, the Bears released Floyd rather than pay him $13 million for the fifth-year contract option they had picked up just 10 months earlier.

It was an unceremonious end to the first stop in Floyd's NFL career, but he seems quite happy with his next chapter in Los Angeles.

His Rams (4-2) host the Bears (5-1) on Monday night, and Floyd understandably had the date circled.

“I’m definitely looking forward to it,” Floyd said Saturday. “The past few years, the Rams and the Bears have been having some great games, and this time I get to experience the other side playing for the Rams. ... I’m motivated in general, just playing with the Rams and trying to help us win. But yeah, going into this game, it’s a little more added energy for it, going against my old team.”

With two sacks and four tackles for loss over six games of solid play for Los Angeles, Floyd is making the most of a chance to revamp his game in a system that's quite similar to the Bears' defense during the first three years of his NFL career.

That's because Rams defensive coordinator Brandon Staley was Chicago's outside linebackers coach in 2017 and 2018, coaching Floyd while working under coordinator Vic Fangio. The Bears' defense has remained formidable since Chuck Pagano took over in Chicago, while Staley appears to have improved an already solid defense around Aaron Donald in his first year in Los Angeles.

“We’ve both got the same styles,” Floyd said of his two employers. “Just different players, different bodies. We’re both pretty much running the same stuff (as the Bears), really. It’s just going to come down to who’s playing better defense Monday night.”

Indeed, Staley's Rams run a 3-4 scheme that requires Floyd to play multiple roles as a pass-rusher, a coverage defender and a run-stopper. While his quarterback pressure wasn't consistent enough to satisfy the Bears during four seasons of declining sack totals, the Rams are putting Floyd in positions to succeed, and he's seizing them.

“We’ve been extremely pleased with Leonard," coach Sean McVay said. "He’s a guy that has great poise and composure. I know he’s excited about going against his former team, but that’s not something that I worry about at all. If anything, he’s brought consistent juice week in and week out. He’s a great energy guy for us, and I expect nothing different on Monday night.”

The game is also a reunion for Staley, who started his NFL career with those two seasons in Chicago. Although Staley remains grateful to the Bears organization, he gives credit for his own meteoric rise to the players he coached, including Khalil Mack.

“All those guys are deeply responsible for me having this opportunity,” said Staley, a first-year coordinator under McVay. "I love those guys. I have the utmost respect for them, and it’s going to be exciting to compete against them.”

On Staley's recommendation last April, the Rams signed Floyd to fill a role that benefited edge rusher Dante Fowler, another high draft pick with an up-and-down start to his career, this time in Jacksonville. Fowler parlayed 1 1/2 strong seasons with the Rams, including a Super Bowl trip, into a $48 million free-agent deal with Atlanta earlier this year.

Like Fowler, Floyd signed a one-year contract with the Rams to prove he was worthy of a bigger, better deal somewhere. Playing alongside Aaron Donald has made plenty of edge rushers look good, and Floyd saw the opportunity to shine.

Aside from the raw statistics, Floyd also has been quite effective at setting the edge on running plays, and his coverage skills are similarly impressive, particularly for a 6-foot-5 player. While he might not end up with 11 1/2 sacks as Fowler did last season, Floyd can contribute to a defense in multiple areas on every down.

“It's the versatility, the passion he plays with," McVay said. "He’s done a great job rushing the passer. He’s playing almost every single snap for us. I think you’re seeing him really play at a high level, and he sets the tone, especially for that outside linebacker group and our edge rushers.”

Indeed, Floyd has played 91.5% of the Rams' snaps, which is more than Donald and everybody else on the LA defense's front seven.

Floyd said he remains friendly with pretty much every player on the Bears' defense, particularly Akiem Hicks and Mack. That likely didn't stop him from telling the Rams everything he knows about his old defense, although Floyd is coy about it.

“All I’m going to say is we’ll see Monday night,” Floyd said with a grin. “I ain’t going to give you no details on what I’ve given to the team. We’ll just see Monday.”