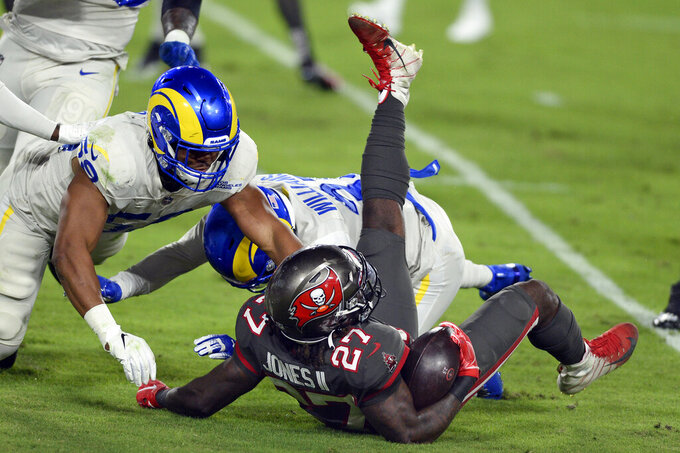 The Rams’ starting middle linebacker will be sidelined for at least three weeks, but likely no more, McVay said. Los Angeles (7-3) hosts San Francisco (4-6) on Sunday.

Tight end Tyler Higbee (elbow) and rookie linebacker Terrell Lewis (knee) also missed practice on Thanksgiving. Higbee's availability Sunday will be a game-time decision, while Lewis will be monitored after his knee was drained.

Kiser injured his knee late in the Rams' 27-24 victory at Tampa Bay last Monday night, McVay said. Kiser leads the team with 77 tackles, along with three passes defensed and a forced fumble.

Kiser won't need knee surgery, and the Rams are cautiously confident he'll only need to miss three games. The Rams visit Arizona and host New England in a Thursday night game over the next two weeks.

“The hope is that it's just those three games,” McVay said. “It's something that you even debate whether or not you even want to (place Kiser on IR), because it's right in that fringe area.”

Kiser is a third-year pro from Virginia who barely played as a rookie and then missed all of last season when he tore his pectoral muscle in a preseason game. He took over for Cory Littleton in the middle of the Rams’ defense this season.

Troy Reeder is likely to play extensively in Kiser’s absence. Reeder started eight games last season before playing a backup role this season, but he started last month when Kiser missed one game with a groin injury.

McVay said the Rams will miss Kiser's “command, his presence, his leadership. ... When he arrives, he arrives violently. He does such a great job of having ownership of what's going on. He and JJ (safety John Johnson) are ultimately the best communicators on the defense, and now Troy will step into that role.”

The Rams also will promote a player from the practice squad to the active roster later in the week to fill Kiser's spot.

The Rams' No. 1-ranked defense has played extensively with just three linebackers in its ostensible 3-4 scheme this season, preferring to have five defensive backs on the field for most downs.

The Rams designated linebacker Ogbo Okoronkwo to return from injured reserve Wednesday, but he is unlikely to play this weekend, McVay said. Okoronkwo is recovering from elbow surgery.

Los Angeles claimed linebacker Derek Rivers off waivers from New England this week, but McVay said Rivers might not be cleared through quarantine and ready to play Sunday if Lewis isn't ready to go.