Ravens enter 2nd half striving for consistency on offense 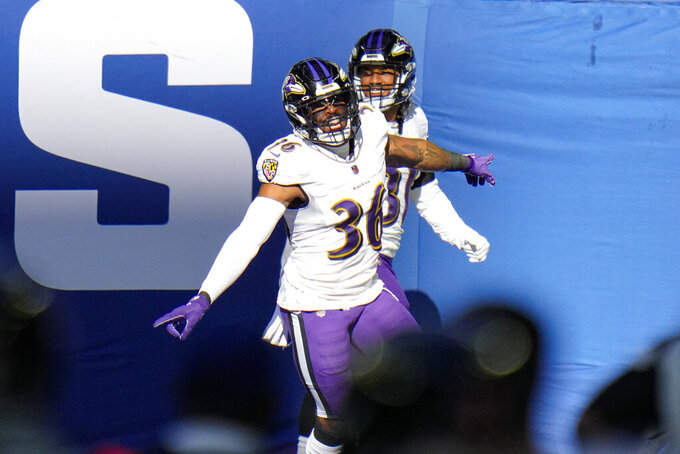 Baltimore Ravens strong safety Chuck Clark (36) celebrates after running in for a touchdown on a fumble recovery against the Indianapolis Colts in the first half of an NFL football game in Indianapolis, Sunday, Nov. 8, 2020. (AP Photo/AJ Mast)

The Baltimore Ravens reached the midpoint of the NFL season with the same record they had last year, though that might be the only comparison between this team and the record-breaking squad of 2019.

A year ago, the Ravens strolled through the second half unbeaten to finish an NFL-best 14-2. This season, Baltimore (6-2) is chasing undefeated Pittsburgh in the AFC North while operating with an erratic offense and striving to overcome several key injuries.

The Ravens also have been impacted by the pandemic. All-Pro cornerback Marlon Humphrey tested positive for the coronavirus last week and seven of his teammates were subsequently placed on the reserve/COVID-19 list.

Baltimore remains a very good team, one on course to reach the playoffs for a third consecutive year. But reigning NFL MVP Lamar Jackson isn't running or passing as efficiently as he did a year ago, when he set a league mark for yards rushing by a quarterback and threw 36 touchdown passes for the highest-scoring team in the league.

Jackson has 12 touchdown passes and has been sacked 21 times compared to 23 all last year. Baltimore ranks near the bottom of the league in yards passing and is on course to finish with 2,722 yards rushing — down 574 from its record-setting mark of 2019. Jackson has 469 yards on the ground after compiling 1,206 last season.

The Ravens raised the bar extremely high last year, so duplicating those numbers would be asking a lot.

“You take every game and every season as you find it," coach John Harbaugh said Monday. “It's different from last year, just like next year will be different from this year. It's really not worth comparing. We're just trying to find a way to win the next game."

The defense played exceptionally well in Sunday's 24-10 win at Indianapolis. Not only did the Ravens limit the Colts to one touchdown and 266 yards, but Chuck Clark returned a fumble 65 yards for a score to keep Baltimore in the game during a first half in which the offense failed to score and compiled a mere 55 yards.

The team has forced a turnover in 21 straight games and the defense has carried the team this year while the offense struggles to get into a groove.

Marquise Brown remains Baltimore's lone deep threat, leaving Jackson to go short more often than not. Brown had three catches against the Colts, the longest 20 yards. But perhaps help is on the way. Veteran Dez Bryant got in for two plays Sunday in his Ravens debut and was not targeted, though that could change after he becomes more acclimated with the offense.

Jackson could use the help. After committing four turnovers one week earlier in a loss to the Steelers, he went 9 for 13 for 51 yards in the first half against the Colts. He regrouped to help Baltimore end an 0-20 skid when trailing at halftime.

Tight end Nick Boyle was targeted four times and had four catches for a team-high 46 yards. He proved to be a successful secondary option for Jackson, who had trouble getting the ball to his customary targets, Brown and TE Mark Andrews.

The Ravens will play the remainder of the season without left tackle Ronnie Stanley (ankle) and defensive back Tavon Young (knee). They hope to have Ingram and Humphrey back this week, but could go several weeks without defensive end Calais Campbell, who strained his left calf in the first quarter against Indianapolis and did not return. In addition, backup cornerback Khalil Dorsey will be out for a few weeks with a dislocated shoulder, Harbaugh said.

31 — With an assist from the defense, the Ravens reached the 20-point mark Sunday for the 31st consecutive game, an NFL record.

The Ravens start the second half at New England on Sunday night, then host Tennessee before traveling to Pittsburgh on Thanksgiving. If Baltimore can survive that stretch, things get significantly easier. The last five games are against Dallas, Cleveland, Jacksonville, the Giants and Bengals.