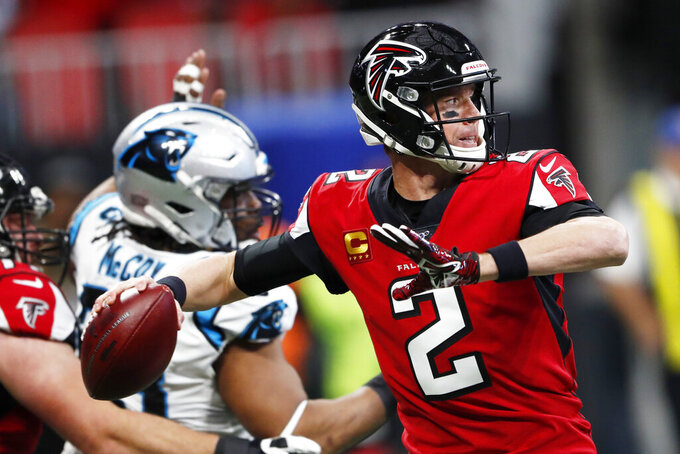 Atlanta Falcons quarterback Matt Ryan (2) works in the pocket against the Carolina Panthers during the first half of an NFL football game, Sunday, Dec. 8, 2019, in Atlanta. (AP Photo/John Bazemore)

Atlanta is out of the playoffs for the second straight season and Ryan, the 2016 NFL MVP, knows another sparse crowd awaits when the Falcons host Jacksonville in Sunday's home finale. Both teams are 5-9.

“I guess it is not that exciting, and we have to do our part as players," he said. “When we get it on, our stadium can get going for sure. It has been disappointing that we haven’t been as good as we are capable of being, but we are playing better right now and hopefully we can give the folks that are there on Sunday afternoon something to cheer about.”

The Falcons rank 10th in home ticket sales, averaging 71,705 through seven games, but the biggest crowd, in Week 2 against Philadelphia, still had plenty of empty seats. Coach Dan Quinn knows against Jacksonville there will be tens of thousands of unused tickets, a trend that's all but guaranteed in Atlanta when the home team isn't winning.

Quinn's job security is shaky with three non-winning records in his five seasons, and the vacant seats aren't helping. The Falcons are 2-5 at Mercedes-Benz Stadium and haven't had a winning home record since going 7-3 with a pair of playoff wins in 2016 before losing in the Super Bowl.

“It has definitely been a bummer for us, not to be able to deliver like we are capable of," he said. “That is why it is important for us this weekend, we want to show them how important they are by having that kind of performance for them.”

Like Atlanta at San Francisco last week, Jacksonville is coming off a late-rally road win at Oakland and is 3-2 away from home with Gardner Minshew at quarterback. Minshew loves to make other team's venues get quiet.

“I think you get energy from the hostile environment sometimes," Minshew said. “I think that kind of fuels me, but I don’t know. I don’t know what it is. It’s fun.”

A few things to look for when the teams try to break a 3-3 series tie:

A lot has been made of the Falcons' seven-game losing streak to AFC opponents. Atlanta has dropped 12 of 13, including the Super Bowl loss to New England, since winning at Denver on Oct. 9, 2016.

The Jaguars have their own struggles with little success against teams from the both South divisions this season. They're 1-7 against the AFC and NFC South. Jacksonville's lone victory was against Week 3 against Tennessee.

Even more daunting, the Jaguars are 4-27 against the NFC since owner Shad Khan took charge in 2012. They've been swept three times and are 0-3 this year.

Khan fired top executive Tom Coughlin on Wednesday after an arbitrator'' damaging decisions against the team — and mainly against Coughlin.

He tried to fine running back Leonard Fournette, who was inactive, more than $99,000 for sitting on the bench during the 2018 season finale. He tried to fine defensive end Dante Fowler $700,000 for missing "mandatory" appointments with team trainers during the 2018 offseason. An arbitrator overturned both of those fines — and dozens more levied by Coughlin.

Khan said he decided weeks ago to fire Coughlin, who botched several draft picks, failed repeatedly to fix the team's quarterback situation and upset star cornerback Jalen Ramsey so much that he faked a back injury to avoid playing for Jacksonville.

Jaguars leading receiver DJ Chark expects to return after missing last week's game at Oakland with a sprained left ankle. Chark, a second-round draft pick from LSU in 2018, has 67 receptions for 956 yards and eight touchdowns. He was voted a Pro Bowl third alternate.

It took Falcons rookie right guard Chris Lindstrom just one game to get into good enough shape to play every snap, and the NFL's No. 14 overall draft pick had no issues with his left foot. Lindstrom missed 11 games fracturing it in the opener.

“The conditioning side of things, there were many times I saw him after practice drenched," Quinn said. “This is before he was even back with the team. You could tell he was putting in the work off the field, so when he had his moment to get back, there weren’t going to be any setbacks for him as long as he was meeting all of the markers."

Fournette has been one of the NFL's most consistent dual threats since getting drafted fourth overall in 2017. He needs 229 scrimmage yards to surpass Fred Taylor's franchise record over a player's first three years. Taylor had 3,763 scrimmage yards from 1998-2000.

“He’s done everything that we’ve asked," Jacksonville coach Doug Marrone said. “He’s worked extremely hard. I keep saying the thing that gets overlooked is probably his pass protection, which he’s done a really good job of. I think everyone can see the numbers with the catches and the runs. I can’t say enough good things about him.”

Falcons defensive end Takk McKinley could be facing surgery on his left shoulder after being placed on season-ending injured reserve this week.

McKinley, the 26th overall draft pick in 2017, has undergone surgery on both shoulders previously in his career. He played four snaps at San Francisco before getting hurt.