Whatever the role, Vikings lean plenty on durable Rudolph 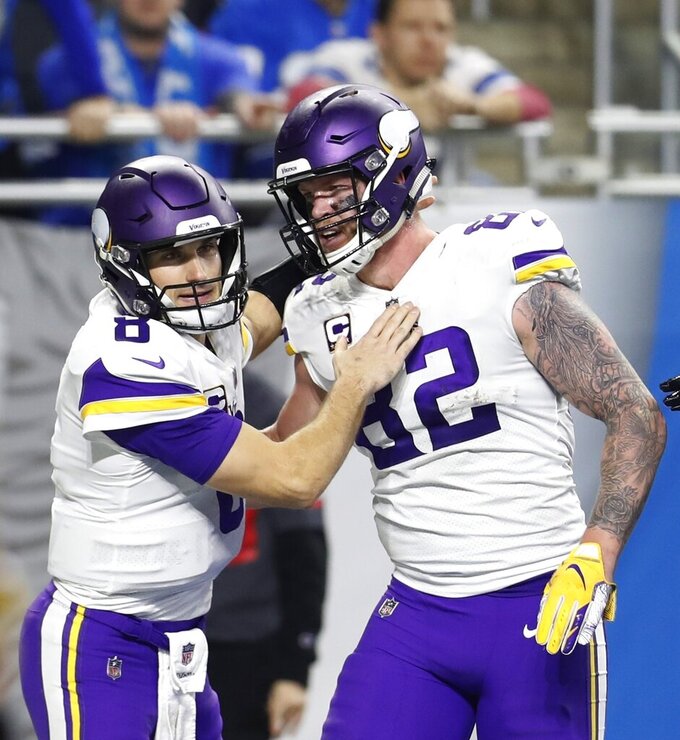 FILE - In this Dec. 23, 2018, file photo, Minnesota Vikings quarterback Kirk Cousins (8) pats tight end Kyle Rudolph (82) after Rudolph scored a touchdown during the second half of an NFL football game against the Detroit Lions, in Detroit. In his ninth season with the Minnesota Vikings, tight end Kyle Rudolph realizes he doesn't have many more of these chances to win a championship. The Vikings start the playoffs at New Orleans on Sunday, Jan. 5, 2020. (AP Photo/Rey Del Rio, File)

EAGAN, Minn. (AP) — With the majority of Minnesota's starters resting on the sideline for the regular-season finale against Chicago, the longest-tenured player on the offense joined the second-stringers to take the first snap.

Kyle Rudolph took his place on the left side of the line for the Vikings, put a textbook-form block on three-time All-Pro outside linebacker Khalil Mack, and watched Mike Boone burst through the gap for a 59-yard gain. Then Rudolph, the ninth-year veteran tight end, jogged off the field and took the remainder of the afternoon off.

“I don't think I've ever graded out perfect in a game,” Rudolph said, smiling.

Though almost every other key player was held out last week, with the Vikings (10-6) locked into the sixth seed in the NFC in the playoffs, coach Mike Zimmer gave Rudolph the opportunity to be on the field for the first snap so he could extend his streak of 81 consecutive games started. That's the longest active run by a tight end in the league.

“I definitely didn’t think that would be something that ended standing on the sidelines completely healthy in my uniform,” Rudolph said.

With the Vikings preparing for their wild-card round game at New Orleans on Sunday, there's nobody on the roster who better understands how fleeting postseason opportunities can be. In nine years, this will be the fourth trip to the playoffs for Rudolph, and the Vikings have only won one of those games. Rudolph has not missed a game since 2014, but given his age (30) and expense (a scheduled $8.825 million salary cap hit for 2020), he's far from a lock to return.

The Vikings have appreciated his presence as much as ever this season, though, in a new system under offensive coordinator Kevin Stefanski and offensive adviser Gary Kubiak that has frequently used multiple tight end formations and allowed rookie Irv Smith Jr. to emerge behind Rudolph as another important contributor.

With running plays and short passes to Dalvin Cook the foundation of the scheme, Rudolph found himself blocking dangerous pass rushers like Mack more than ever earlier in the season. When wide receiver Adam Thielen was sidelined by a hamstring injury for nearly two months, Rudolph re-emerged as a primary target for quarterback Kirk Cousins and caught six touchdown passes in a six-game stretch. He totaled only six receptions over the final four weeks, though, asked again to frequently help protect Cousins and seal the edge for the ballcarriers. With Cook and Thielen back at full strength, Rudolph could well find himself in a blocking-first role against the Saints.

“He's such a great leader because he shows up every day and doesn't care what his role is,” Thielen said, adding: “We are going to need him on Sunday, and he'll play a big role. We don't know what that is, because we never know until the game gets rolling.”