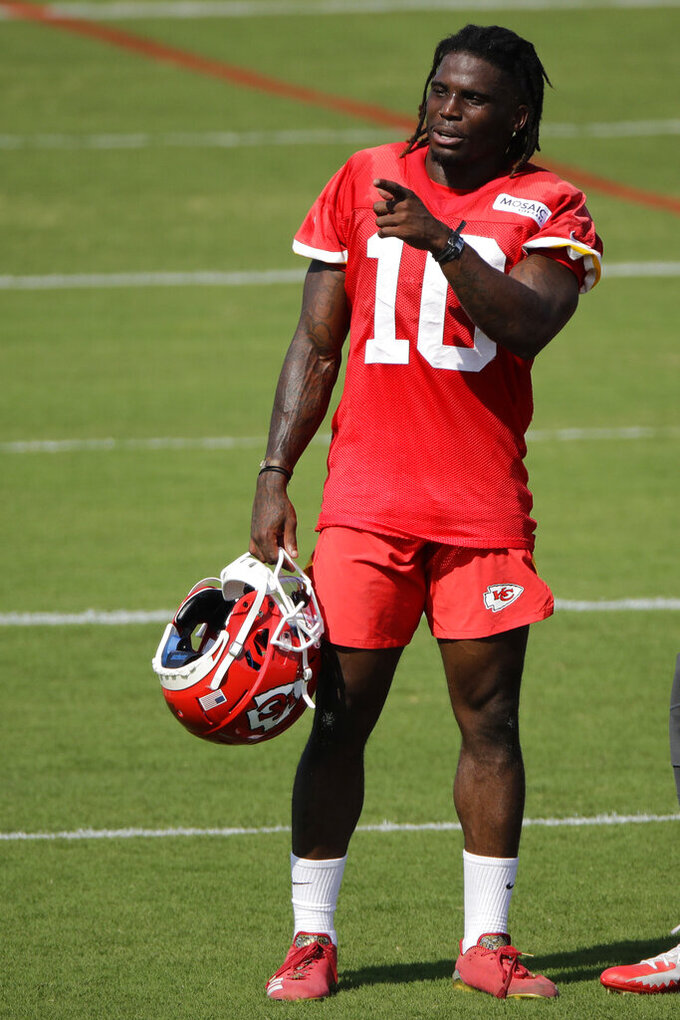 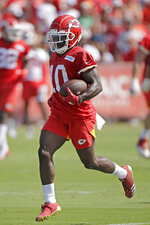 ST. JOSEPH, Mo. (AP) — Tyreek Hill was contrite but repentant in his first comments since he was banished from the Kansas City Chiefs following an audio recording in which his then-fiancee accused him of hurting their son.

The star wide receiver declined Sunday to discuss the specifics of his case, which wound to a conclusion late last week when the NFL declined to punish him for violating the league's personal conduct policy. But he did apologize for the precarious situation he left the Chiefs in this past offseason.

"I've learned to just appreciate those around me," Hill said after the Chiefs' second workout of training camp at Missouri Western. "I feel like I take that for granted sometimes, being a professional athlete. I tend to not stay humble, you know what I'm saying? I still love my kids and I still love my family, but I feel like sometimes I take all of those things for granted."

The Chiefs were poised to make their first selection in the NFL draft when the graphic, secretly taped audio of Hill and Crystal Espinal aired on a local TV station. The Chiefs quickly suspended the two-time All-Pro from all team-related activities and, uncertain of Hill's future with the organization, used a second-round pick on speedy wide receiver Mecole Hardman.

Hill remained barred from the team during voluntary summer workouts and the Chiefs' mandatory minicamp, even after the local district attorney decided there was not enough evidence to pursue charges.

The NFL was still weighing whether to punish Hill under terms of its personal conduct policy when it sent investigators to Kansas City late last month. During an eight-hour session, Hill supplied the league with his side of the story, laying out the facts from his point of view.

"(Commissioner) Roger Goodell and his team did their thing. They dug in, got all the facts, and I'm very appreciative of those guys as well," Hill said. "The meeting was long. It was probably the longest meeting of my life. It was crazy. What I was trying to get across was just the facts, man."

The NFL ultimately decided late last week that it would not punish Hill, and the Chiefs immediately announced that his team-issued suspension was lifted and he would be reporting to training camp.

He was not available to reporters during check-in day Friday, nor did Hill speak following the Chiefs' first practice Saturday. But he was carried to the practice field by a chorus of fans chanting "Tyreek! Tyreek!" in what could only be described as a groundswell of support.

It was a 180-degree turn from the sentiments most fans had just a few months ago.

"The love feels good, to come back out here and get a chance," Hill said. "I'm on a new journey as far as me growing as a father and as a human."

There is still an ongoing investigation by the Kansas Department for Children and Families, and Hill said he could not discuss that case. Nor would he discuss the specifics of a recent sit-down that he had with Clark Hunt, the Chiefs' chairman and the most visible face of the ownership family.

Hill did acknowledge learning a lesson he hoped to pass on to younger players.

"You can look at me and tell I've been through a lot," he said, "even when I first came into the league. I had a bad history. Just be thankful for the ones around you, stay humble and grounded, love your parents and your kids — if you have kids — and just work hard."

Hill caught 12 touchdown passes and set a franchise record with 1,479 yards receiving last season, earning his third Pro Bowl trip in as many seasons. It's a big reason why the Chiefs were interested in signing him to a long-term deal as he entered the final year of his rookie contract.

Where those talks now stand remains in question.

"It was good having him back out there," Chiefs offensive coordinator Eric Bieniemy said Sunday. "He is an intelligent kid. He picked up right where he left off. "He's doing a heck of a job."

NOTES: DT Chris Jones insisted he always planned to report to camp, even after missing the entire offseason while angling for a new contract. He is also entering the final year of his rookie deal. "I'd love to spend the rest of my career here," Jones said, "but I'm focused on learning the new defense, the new scheme." ... FS Jordan Lucas and RB Damien Williams left practice early with hamstring injuries.