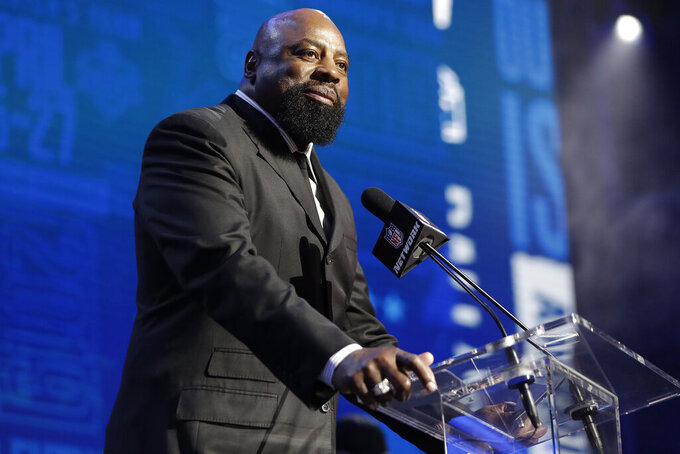 FRISCO, Texas (AP) — Trysten Hill didn't have a happy ending at Central Florida, where the defensive tackle appeared to fall out of favor with the coaching staff after Scott Frost left for Nebraska.

The Dallas Cowboys showed little concern for that history while drafting an interior defensive lineman before the third round for the first time in almost 30 years. After the two biggest moves of the offseason involved their pass rush, the Cowboys kept the focus on the defensive front with their first pick of the draft, taking Hill 58th overall in the second round Friday night.

Dallas, which didn't have a first-round pick because of a trade last season for receiver Amari Cooper, took Penn State offensive lineman Connor McGovern with the 90th overall pick in the third round. Hill and McGovern skipped their senior seasons to enter the draft.

The 308-pound Hill wasn't happy with his playing time when the Golden Knights lost to LSU in the Fiesta Bowl, ending a 25-game winning streak. He started just once in 12 games after starting all 13 games in both seasons under Frost.

But Hill and Cowboys defensive coordinator Rod Marinelli hit it off during the process leading to the draft, including a meeting that Hill remembered the night before his NFL combine workout in February.

"He wants the best out of me and I want to give him everything I got," Hill said. "Him taking hold of me in this whole process and me being able to call him and chat with him and just hear his voice was huge in this whole ordeal."

Coach Jason Garrett said the Cowboys spent time with Frost and the staff that was with Hill his first two years. Garrett said they "endorsed him highly, both as a player and as a person."

That was enough for Dallas to take a defensive tackle before the third round for the first time since drafting Russell Maryland first overall in 1991.

"We got very comfortable with that question because we had the same question everybody else had," Garrett said. "He played well in '17 and then is not a starter in '18. What's going on there? He's still a young guy. He's still maturing. The stuff that we think is most important. He loves 'ball. He wants to work at it. He wants to be great. He wants to be part of something special. We feel like he has all those qualities."

Despite a strained relationship with the coaching staff, Hill was productive in his final season with UCF, recording career highs with 36 tackles, three sacks and 10 1/2 tackles for loss. He had six tackles, three for loss and two sacks in a 56-41 win over Memphis in the American Athletic Conference championship game.

"I think I'm a dominant, tenacious player, and everything's a competition," Hill said. "That's how I was raised. That's what I'm going to do day in and day out. I'm excited to get to work because I know that's how Marinelli preaches."

Marinelli says he plans to use Hill in the same position as Maliek Collins, a three-year starter going into the final year of his rookie contract.

Defensive line was the top choice in the draft for the Cowboys after they made star pass rusher DeMarcus Lawrence the highest-paid player in franchise history with a $105 million, five-year contract and acquired defensive end Robert Quinn from Miami in a trade.

McGovern brings the versatility the Cowboys covet with offensive linemen. He played guard as a freshman with the Nittany Lions, center as a sophomore and mostly guard his final season in 2018.

"To me he was a classic case of us doing our best to look up at the board and say, 'Who's the best player up there?'" Garrett said. "He for us was by far the best player at that time. Exactly what we want in our offensive linemen. He's smart, he's tough, he loves to play the game."

The Cowboys go into Saturday with four picks in the final four rounds: two in the fourth and one each in the fifth and seventh rounds.