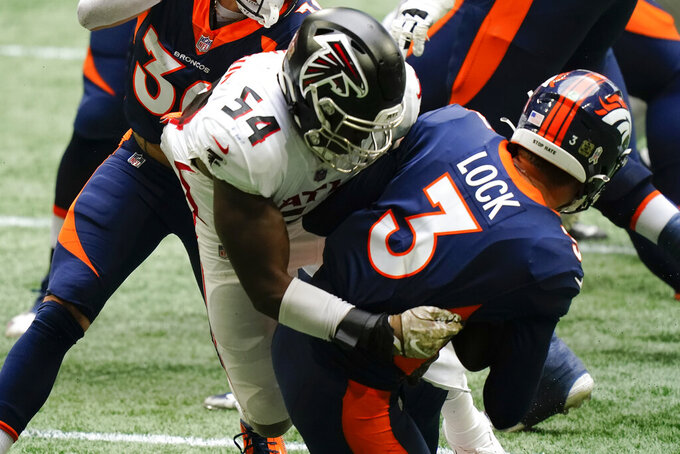 ATLANTA (AP) — The Atlanta Falcons are looking for other ways to boost their struggling pass rush as they plan to be without defensive end Dante Fowler Jr. for another week.

Fowler sat out Atlanta's 34-27 win over Denver on Nov. 8 with a hamstring injury. Then, during Atlanta's bye last week, Fowler was placed on the reserve/COVID-19 list.

That means the Falcons could be thin at defensive end as they prepare for Sunday’s game at New Orleans, which will be without injured quarterback Drew Brees.

Teams are not allowed to disclose if a player tested positive for COVID-19 or was placed in quarantine. It is not known if Fowler has a chance to come off the list before Sunday’s game.

Even with a healthy Fowler, the release of McKinley would create more urgency for rookie Marlon Davidson to contribute. Davidson, a second-round draft pick from Auburn, has four tackles in three games.

The Falcons have been slow to bring Davidson back from a knee injury and his stay on the COVID-19 list. He was held out of the last two games, wins over Carolina and Denver, despite participating in practice and not having an injury designation.

“We want him to get all his movements right and get his steps and his skill and the things he’s going to need to be effective for us moving forward,” Morris said Monday. “I’m looking forward to him potentially being a factor in the next couple weeks of our season.”

Defensive tackle Grady Jarrett provides a good push in the middle of the line. He has 2 1/2 sacks, sharing the team lead with linebacker Deion Jones. The Falcons have only 14 sacks.

“It’s the next guy up,” Jones said of the need to replace Fowler. “Make sure that guy is ready. ... Definitely I wish he was with us. ... I feel like we’re still going to make it happen, but like I said we want our dog with us.”

Even as Atlanta has won three of its last four games, the inability to create a consistent edge rush has remained a weakness on an improving defense.

Fowler was eager for a big season after signing a three-year deal with Atlanta worth up to $48 million. He has two sacks and one forced fumble in eight games. Fowler was starting to produce big plays when he suffered the hamstring injury.

Among players who must play bigger roles are Charles Harris, Jacob Tuioti-Mariner and Allen Bailey.

Morris said he also may ask for more from linebackers Jones, Foye Oluokun and Mykal Walker, though they'll be busy trying to contain Saints running back Alvin Kamara.

“Right now we have to find a way to get a pass rush and those three guys have stepped up big for us,” Morris said.

NOTES: Morris expects to learn more on Wednesday about the status of WR Calvin Ridley, who missed last week's game with a mid-foot sprain. Ridley worked on the side with a trainer on Monday and is expected to participate in some team drills on Wednesday.