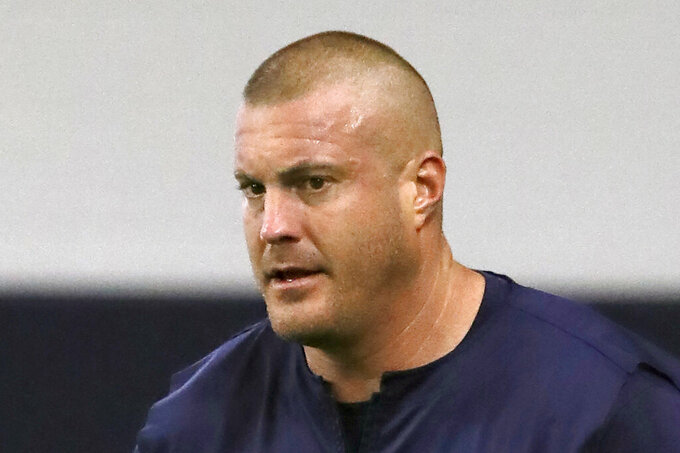 FILE - In this June 11, 2019, file photo, then-Dallas Cowboys offensive line coach Marc Colombo participates in drills at the team's NFL football training facility in Frisco, Texas. A person with knowledge of the situation has told The Associated Press that the New York Giants have fired offensive line coach Marc Colombo. The person asked not to be identified because the team has not confirmed the move. When the Giants hired former Cowboys coach Jason Garrett to be the offensive coordinator, Colombo followed him here. (AP Photo/Tony Gutierrez, File)

The Giants (3-7) will be playing their first game since the stunning dismissal more than a week ago when they face the Bengals (2-7-1) in Cincinnati on Sunday.

Coach Joe Judge fired Colombo on Nov. 18 after the two argued about the planned hiring of veteran line coach Dave DeGuglielmo as a consultant. The move came with the line performing well, the team on a two-game winning streak and heading into a bye week.

Judge defended his action as in the best interest of the team. He hired DeGuglielmo to coach the line, which had helped the team gain at least 100 yards rushing in six of the last seven games.

Neither Garrett, who coached and hired Colombo as an assistant while in Dallas, nor Gates had been available for comment before Friday.

Without being asked a question on the firing, Garrett said Judge had addressed the issue.

“So I don’t I don’t see any reason for me to talk about it much further,” he said. “Joe took care of all that. And we’re focused on what we need to do this weekend against Cincinnati.”

Garrett also declined to say whether Judge had spoken to him about hiring DeGuglielmo as a consultant. He said the line was in good hands with DeGuglielmo. Garrett described his relationship with Judge as great.

When asked about the firing, Gates, like Garrett, said Judge had addressed it. He said DeGuglielmo is a good guy who has changed some things, but the techniques are ones he has used with other coaches in his career.

NOTES: Graham Gano practiced with the team Friday and Judge is optimistic he will be able to kick Sunday. He tested positive for COVID-19 before the bye and has been isolating in a hotel room. Ryan Santoso would kick if Gano, who has made 20 straight field goal attempts, cannot play. ... There is a chance rookie safety Xavier McKinney makes his NFL debut this weekend. The second-round draft pick from Alabama broke a foot in training camp. ... LBs Tae Crowder (hamstring) and Oshane Ximines (shoulder) may return from injured reserve. ... CB James Bradberry, who missed practice the last two days because of personal reasons, was back Friday and is expected to play.