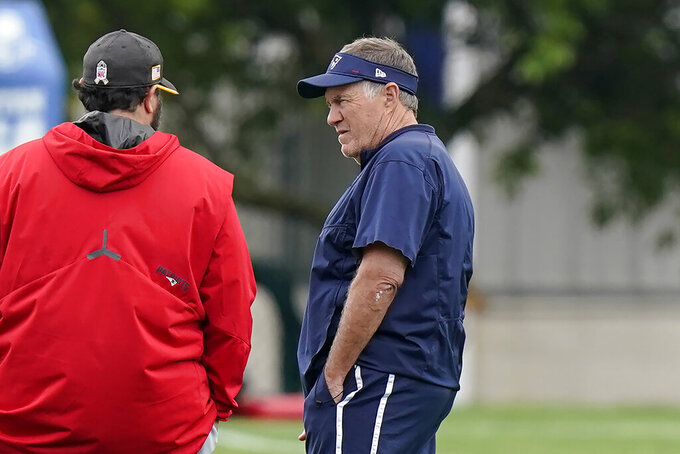 FOXBOROUGH, Mass. (AP) — For most of his past two decades with the New England Patriots, assistant coach Ernie Adams’ responsibilities have been shrouded in secrecy.

Sticking mostly to the periphery during practices or on game days, Adams occasionally interacted with players or other coaches, but most often could be seen having one-on-one conversations with coach Bill Belichick.

It stayed that way right until the end when Adams, a former high school classmate of Belichick, participated in his final practice with the team Wednesday. His retirement marks the end of a four-decade NFL run that began with the Patriots in 1975 as an offensive assistant and continued with short stints with the New York Giants and Cleveland Browns.

It’s now ending back where it started in New England, where he has been throughout Belichick’s tenure, spending the past 21 years of his career as the team’s director of football research.

But in his first formal interview with members of the media on Wednesday, Adams said his job has always been simple in his mind.

“Basically, my job is to figure out as many things as I can to help the New England Patriots win football games,” Adams said. “In the end, that’s what we’re all about here. That’s what we do.”

Adams, 68, has been part of each of the Patriots’ nine Super Bowl appearances and six championships during Belichick’s tenure. He said the open-ended role was perfect for him.

“Whether it’s strategy, personnel or anything else. The thing that’s been great about my job is I’ve never really had any constraints put on me,” Adams said. “I could go in any area I thought would help us and, hopefully, I’ve made some positive contribution.”

Belichick initially announced Adams’ retirement on the final day of this year’s draft.

In doing so, Belichick provided a rare glimpse inside the Patriots’ bubble, allowing camera crews to film Adams making the team’s final selection. That player, receiver Tre Nixon, was scouted and chosen personally by Adams.

The honor was merited for someone who has been a friend of Belichick for most of his life.

The pair originally met as boarding school classmates at Phillips Academy in Andover, Massachusetts. They hit it off because Adams, a voracious reader, had read the book “Football Scouting Methods” that Bill’s father, Steve Belichick, had written in 1963 while coaching at the U.S. Naval Academy.

The fast friends also played alongside one another on the Phillips Academy football team. Bill was the center, Adams was a guard.

Belichick said Adams’ impact is hard to quantify. He said he’s touched every area of the teams, from the personnel department to its internal grading of players, to strategy and game-planning.

“Ernie’s had such a big impact on our success here with the Patriots in so many different ways,” Belichick said. “I’ve leaned heavily on Ernie for 21 years here and going back to Cleveland and New York and our relationship which started at Andover over 50 years ago. Ernie’s been a great friend. He’s certainly been a great asset to this organization and to me personally.”

While it may be a little clearer what Adams has been doing the past two decades in New England, true to form, he is keeping probably the biggest mystery about him quiet.

Adams was interviewed for a 2014 NFL Films documentary about the team and in the background the curious phrase “Pink Stripes” was written on a dry-erase board. The meaning of it has been a point of curiosity and jokes among Patriots fans ever since.

So what did it mean?

“Well, I go back to my Wall Street days, everything we did we said was proprietary trading information, so I’ll leave it at that’s strictly an inside joke and proprietary football information,” Adams said.