No regrets for Cowboys' Witten after return from retirement 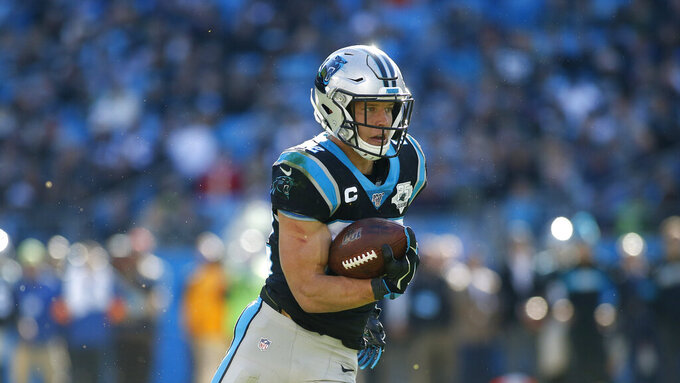 Carolina Panthers running back Christian McCaffrey (22) runs against the Seattle Seahawks during the first half of an NFL football game in Charlotte, N.C., Sunday, Dec. 15, 2019. (AP Photo/Brian Blanco) 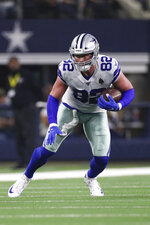 Jason Witten returned for a club-record 16th season with Dallas after a year in retirement as a broadcaster in part because the tight end thought the Cowboys could make a Super Bowl run.

Now that they’ve lost control of their playoff fate with a game remaining in a disappointing season, Witten has no regrets.

“It doesn’t always go where you’re going to get a 13-3 (season) and a (No.) 1 seed and a bye and home playoff games throughout,” said Witten, who has 59 catches for 505 yards and fours touchdowns this year. “I knew for this to be successful, it’s kind of like a quarterback. You’ve got to win games.

With quarterback Dak Prescott and running back Ezekiel Elliott powering the offense alongside a defense that appeared to have several young, emerging playmakers, the Cowboys had high expectations in the preseason. After Elliott ended a long holdout by signing a $90 million extension the day of the first practice for the regular season, the Cowboys started 3-0.

Dallas is 4-8 since and has to beat Washington on Sunday while hoping Philadelphia loses at the Giants to repeat as NFC East champion. The Eagles put the Cowboys in that position by beating them with the division lead on the line last weekend.

If the season ends Sunday, it will go down as one of the most disappointing for Jerry Jones in his 30 years as owner, and could be the end of Jason Garrett’s tenure as head coach after nine full seasons and part of a 10th.

“Certainly at this point in your career, you don’t come play for a team that you don’t feel like has the ability to compete and contend for a championship,” said Witten, who is one touchdown catch shy of Dez Bryant’s club career record of 73. “You know it’ll be time to reflect back to how we got to 7-8. The biggest thing we have to do right now is go beat Washington, knowing it’s going to be tough and let’s see what happens and then figure it out from there.”

Witten wouldn’t entertain questions of whether this was his last game, although the 37-year-old did say he planned to get into coaching once he retired for good. Witten also said he wanted to coach in the NFL. There’s been plenty of talk of him taking the college route at his alma mater, Tennessee.

“I think it will be a pretty quick decision,” Witten said. “If I allowed my mind to start going to that route, I wouldn’t be doing myself any justice or really this football team. When I made that decision, I knew I had to dive into this thing.”

Tennessee rookie wide receiver A.J. Brown has heard the stories of players who go throughout an entire NFL career never having played in a postseason game.

He can commiserate a bit. Brown never got the chance to play in a bowl game during his three seasons in college at Mississippi.

“This is new,” Brown said of a playoff chase. “I haven’t played in a playoff game since high school.”

That was when Brown helped lead Starkville High in Mississippi to the 6A state championship. And that’s why Brown is so determined to do whatever he can Sunday when the Titans visit Houston needing only a victory to clinch the AFC’s sixth and final playoff spot.

“Whatever I have to do to help this team win on Sunday, I’m going to do it times 10,” Brown said.

The Detroit Lions are committed to giving almost $600,000 in grants in 2020 as part of the franchise’s social justice initiative.

Detroit’s players chose where funds will go to assist the community with scholarships, social educational programs and medical aid.

The program is the result of a working relationship the NFL and players established in October 2017 following player demonstrations for social justice during the national anthem.

“We chose organizations that were right here in Detroit, right in our reach, where we could see the impact that it’s having within the organization and in the city,” Lions linebacker Devon Kennard said. “Over the last year, we wanted to see the fruits of what we gave financially and also our time.”

The rookie wide receivers each have a chance to reach 1,000 yards receiving this season — and make some NFL history.

Christian McCaffrey has been a threat to opposing defenses and the NFL record books all season.

The Panthers running back is on the verge of making some more history Sunday.