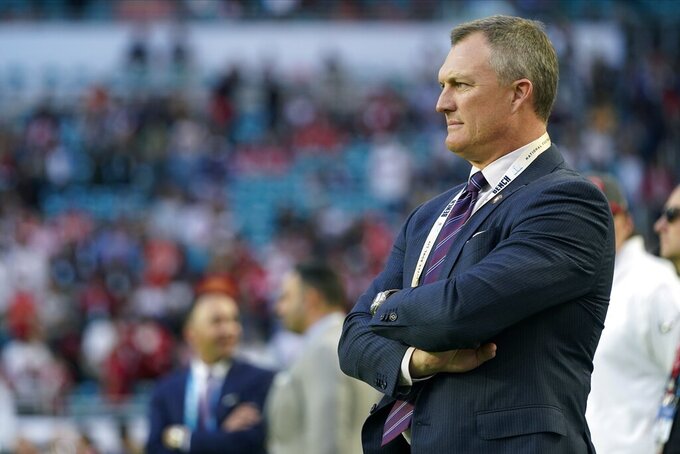 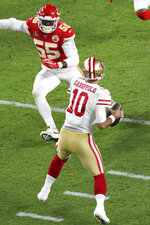 SANTA CLARA, Calif. (AP) — Coach Kyle Shanahan knows the criticism is floating around because of all the messages asking if he's OK after the San Francisco 49ers collapsed in the fourth quarter of a Super Bowl loss to Kansas City.

There are questions about time management and play calls, the performance of quarterback Jimmy Garoppolo and why the defense couldn't come up with a big stop when needed.

But Shanahan insulates himself from all of that and believes in his decisions and players even if the team ended up losing 31-20 after leading by 10 points in the fourth quarter.

"I don't feel it's intense blow-back, I'm not on Twitter and whatever all that stuff is," Shanahan said Thursday. “I would never do that to myself anyway. I've lost the Super Bowl before, I've been a part of a bigger lead that was lost, so I'm very well aware of what goes with that. I also am not a good liar. How you guys hear me talk is exactly how I feel. I'm really upset about the loss because it's hard to get there. I personally thought we had the best team in the NFL this year. We weren't. We've got to deal with that.”

Now the Niners must begin the long process of getting back this far so Shanahan can be part of the one team that ends a season happy after winning a championship.

Only three teams have bounced back from the disappointment of a loss in the title game to win it all the following year, with Dallas and Miami doing it in back-to-back seasons in 1971-72 and then the New England Patriots again in 2018.

Eight other Super Bowl losers returned to the game the next season only to lose again, including Buffalo three times. But 15 of the past 33 teams that lost in the Super Bowl failed to even make it back to the playoffs the following year, including the Los Angeles Rams this past season.

"We do believe we're different," general manager John Lynch said. "There's not many teams that go from four wins to 13 and dominate an NFC in the playoffs and get there. We believe this team is different. We believe we're capable of doing that."

The offseason will feature big decisions about whether the Niners can bring back key free agents like defensive lineman Arik Armstead, receiver Emmanuel Sanders and safety Jimmie Ward.

All expressed interest in returning but keeping everybody will be difficult under the salary cap, especially with players like All Pro tight end George Kittle and defensive tackle DeForest Buckner up for extensions soon.

San Francisco won't have nearly as much leeway to add big pieces like they have the past few offseasons when they've brought in high-priced players like cornerback Richard Sherman, defensive end Dee Ford, linebacker Kwon Alexander and fullback Kyle Juszczyk.

But before the Niners can move on to next season, they still have to get over the pain of losing the Super Bowl this year. Shanahan has experience dealing with a painful Super Bowl loss, having been offensive coordinator in Atlanta when the Falcons blew a 28-3 lead to New England before losing in overtime three years ago.

Shanahan quickly moved on after that defeat, taking over as head coach in San Francisco just days later. He has said repeatedly that there was only one play call he regretted in that loss to the Patriots -- a pass on second-and-11 that led to a sack that knocked the Falcons out of field goal range.

He has no regrets about any of his play calls against the Chiefs, including the decision not to use a timeout after stopping Kansas City on third down with just less than two minutes left in the first half.

The Niners got the ball back at their 20 with 59 seconds left instead, about 40 seconds less than if they had used a timeout. A first down run ran even more time off the clock and San Francisco ended up with no points after an offensive pass interference call on Kittle negated a big gain.

"I was as confident in what we did in that situation as anything we've done all year," Shanahan said. "I mean that strongly. That's something you work at for two weeks studying that team, what they're capable of doing. You're not going to give the ball back to them no matter what in that situation."

Shanahan also said he remains confident in Garoppolo, who completed just 3 of 11 passes in the final quarter in a disappointing ending to his first full season as a starter after missing most of last season with a torn ACL.

He missed some open receivers, including Sanders on a deep pass that could have put San Francisco back ahead in the final two minutes.

"I think Jimmy is one of the main reasons we got to the Super Bowl. I think he overcame a lot," Shanahan said. "I can't tell you how much I loved coaching the guy as a player and as a person this year."