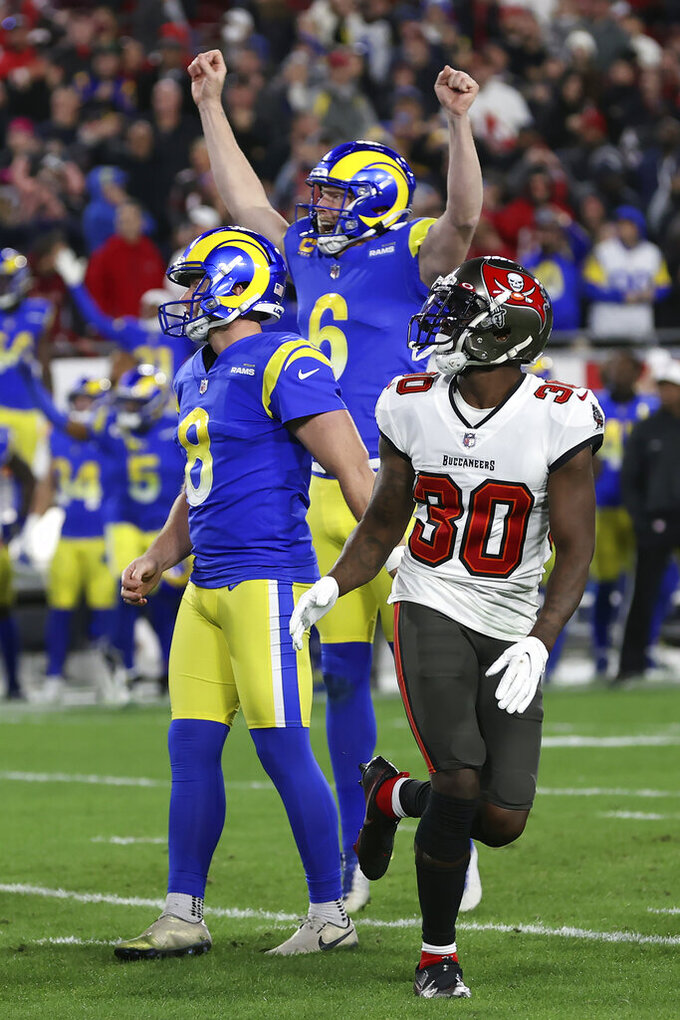 Jay Feely stood on the Arrowhead Stadium sideline witnessing one of the best quarterback duels in the NFL's 102-year history, the capstone to what many are calling the greatest weekend of games the league has ever seen.

Mesmerized by the back-and-forth between Patrick Mahomes and Josh Allen, Feely came to a stark realization in the deafening din: he was yelling just like everyone else.

“This was the greatest weekend of NFL football ever," Feely said Monday, echoing a popular sentiment in the wake of a quartet of divisional-round games that featured last-second field goals and lifelong regrets.

Clutch kickers secured walk-off upsets for the 49ers at Green Bay, the Bengals at Tennessee and the Rams at Tampa Bay before Harrison Butker's 49-yarder sent the Chiefs' nightcap against Buffalo into overtime Sunday night.

Mahomes then put the Chiefs in an unprecedented fourth consecutive conference championship at Arrowhead Stadium with a 42-36 win with an 8-yard TD toss to Travis Kelce, whose playground improvisation helped put the Chiefs into field-goal range with 3 seconds left in regulation.

“I had never been at a game on the sideline yelling and screaming as a fan," said Feely, who has spent the past seven seasons as an NFL special teams analyst for CBS following his 14-year pro kicking career. “It was just unbelievable play, jaw-dropping, just spectacular.”

Every game came down to special teams thunders and blunders.

The second-guessing began immediately after the Bills shunned a squib kick and kicked the ball out of the end zone.

Feely said the real headscratcher, however, was the Bills' No. 1 defense somehow allowing Tyreek Hill to catch a 19-yard pass and Kelce to haul in a 25-yarder to the Buffalo 31 as Mahomes called timeout with 3 seconds left.

“I've heard all day about how they should have squib-kicked it,” Feely said. "Say you squib-kick it and they jump on it, remember, the clock doesn't start until they touch the ball — it's like a basketball rolling out downcourt. If they jump on it on the 30, maybe 1 second goes off. But they've gained 5 yards of field position. That's not an advantage.

“Now, if you kick it to the 3 where now they have to return it, now there's an advantage there,” Feely added. “But you risk a big return.

"What I couldn't believe was that the Chiefs didn't have Tyreek Hill or Mecole Hardman back deep. They had Byron Pringle. That was surprising to me. They wanted the touchback.”

The Bills happily gave that to them.

Lost in the fantastic finish was Kelce decided not to run the short route that was called, one that would have made for a much longer field-goal try.

He told Mahomes during a timeout, “ I'm just going to run to an open area.”

Midway through his cadence, Mahomes hollered, “Do it, Kelce! Do it! Do it!”

Kelce ran straight upfield, catching Mahomes' quick pass in stride for a 25-yard gain. Mahomes released the pass just as he was about to get plastered by defensive end Jerry Hughes.

That impromptu bit of backyard football put Butker well within his range and he nailed the 49-yarder to send the game into overtime, where Kelce's touchdown won it.

“That was a huge kick,” Feely said.

The last of so many over the weekend.

Bengals rookie Evan McPherson walked off the top-seeded Titans 19-16 with a 52-yarder set up by Logan Wilson's interception at midfield with 20 seconds left.

“Ice in his veins," bragged Bengals coach Zac Taylor of his rookie from Florida who had three walk-offs in the regular season, including one over the Chiefs in Week 17 that clinched Cincinnati's first AFC North title since 2015. And he's kicked four field goals in each of the Bengals' playoff wins.

“This is what I do for a living," McPherson said. "It’s my job to stay cool, calm and collected in moments like those."

Even with kickers getting ever stronger and sharper, rare is the rookie kicker who has instant success in the NFL.

“I give (former Florida special teams staffer and ex-NFL kicker) Shayne Graham a lot of credit,” Feely said. “He had him ready to step in and he had him mentally and physically prepared for this moment.”

Gould was good from 45 yards in the swirling snow at Lambeau Field, giving San Francisco a stunning 13-10 win over the top-seeded but deeply flawed Packers in what might have been Aaron Rodgers' Green Bay farewell.

“Robbie's one of the best of all time," Feely said. “The weather and the pressure weren't going to have an impact on him and he went out and drilled it.”

After coming up confoundingly short on a 47-yard attempt earlier in the game, Matt Gay nailed a 30-yarder to give the Rams a 30-27 win over the defending champion Buccaneers, his former team.

Then, there was the Packers' trio of terrible special teams mistakes beginning with them allowing safety Jimmie Ward to break through to block Mason Crosby’s 39-yard field-goal attempt at the end of the first half.

That loomed ever larger when the 49ers added a blocked punt on just a five-man rush.

“The 49ers weren't even trying to block it,” Feely said. "The Packers had eight guys to block five, but they somehow left the long snapper alone with no help against a 6-4, 274-pound Jordan Willis.”

Willis burst through the middle and blocked Corey Bojorquez's punt, rookie safety Talanoa Hufanga scooped it up and returned it 6 yards for the touchdown that tied it at 10 with under five minutes remaining. After Green Bay went three-and-out, the 49ers drove for Gould's game-winner — when the Packers had just 10 defenders on the field.

“We miscounted up in the box,” acknowledged Packers coach Matt LaFleur. “Would it have made a difference? I don’t know. Maybe. But it sure looks bad, and it’s embarrassing that that happens under my watch.”

It's LaFleur's fault, Feely suggested, for failing to fix his faulty special teams that were problematic all season long. They struggled in nearly every aspect of special teams a year after LaFleur fired coordinator Shawn Mennenga and promoted Maurice Drayton to replace him.

The Packers' kicking game problems only worsened in the playoffs.

“You cost your team a playoff win because you didn't address that,” Feely insisted.

LaFleur said Monday he would pay more attention to special teams, starting with putting more starters on those units even though running back A.J. Dillon fractured a rib in a pile-up while he was blocking on a kickoff return Saturday.

Feely figures special teams will play a big part in deciding which teams advance to the Super Bowl, too, saying, “There's a decided advantage in both games.”

According to efficiency metrics from Football Outsiders, the Rams ranked fourth in the NFL on special teams in 2021; the 49ers ranked 26th. The AFC matchup is closer: the Chiefs ranked third and the Bengals eighth, but Feely said Butker's experience gives him the edge at home.

“McPherson has had a great year,” Feely said. “But I still trust Butker.”