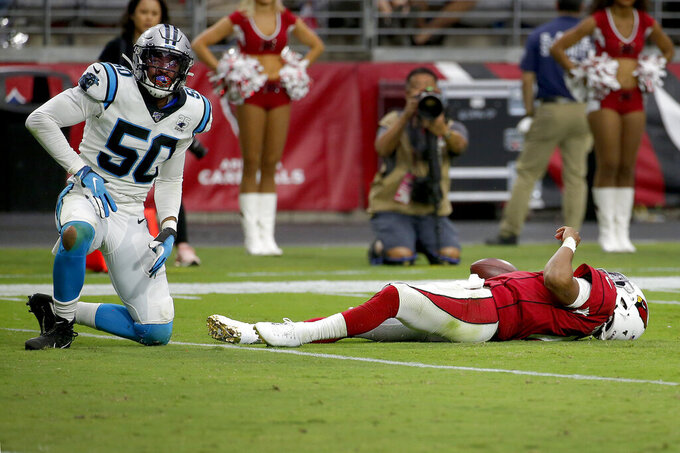 Arizona Cardinals quarterback Kyler Murray lies on the field after being sacked by Carolina Panthers linebacker Christian Miller (50) during the second half of an NFL football game, Sunday, Sept. 22, 2019, in Glendale, Ariz. (AP Photo/Rick Scuteri)

GLENDALE, Ariz. (AP) — Kyler Murray seeemed to take another step in his progression as a pro in the first half against Carolina, fitting passes in tight windows and showing off his speed on designed runs.

Once the second half rolled around, Arizona's quarterback looked shaky against the Panthers' pressure, throwing two interceptions and numerous other off-target passes.

And Murray wasn't even the Cardinals' biggest problem.

Their defense was dismal in the desert.

Taking a step back from their first two games under coach Kill Kingsbury, the Cardinals allowed backup Kyle Allen to throw for four touchdowns and Christian McCaffrey to run for 153 yards in a 38-20 loss to the Panthers on Sunday.

"The physicality, some of that was just embarrassing," Cardinals nose tackle Corey Peters said. "They ran the ball, they passed the ball, so completely unacceptable."

Arizona's secondary, missing Patrick Peterson (suspension) and Robert Alford (injured), repeatedly left Carolina's receivers open, including DJ Moore on a 52-yard touchdown just before halftime. The Cardinals' defensive front, after getting some early pressure on Allen, didn't help the secondary by giving him plenty of time to throw.

"We take a lot of pride in getting after quarterbacks and getting after it," Cardinals linebacker Jordan Hicks said. "We just go to do a better job."

The Cardinals' big problem, as it has all year, was stopping the tight end.

Greg Olsen continually found gaps in Arizona's coverage, catching seven passes for 75 yards and a pair of touchdowns. This after Detroit's T.J. Hockenson had six catches for 131 yards and a TD, and Baltimore's Mark Andrews caught eight passes for 112 yards and a score.

"We have to get that cleaned up," Kingsbury said. "That's three weeks in a row that we weren't able to slow down the tight ends. They're premier players, but still we've got to do a better job with that."

The run defense wasn't much better.

The Cardinals (0-2-1) kept McCaffrey mostly in check in the first half, but when they focused on stopping the passing game, the former Stanford running back took advantage with some big runs. His 76-yard touchdown run late in the third quarter put Carolina (1-2) up 28-20.

"You don't want to have that happen, clearly, but there was plenty of game left and the way this team has responded the past couple weeks, I felt like we would respond again," Kingsbury said. "Unfortunately, we didn't."

Once Allen hit Olsen on a 3-yard touchdown early in the fourth quarter, Arizona had to change its offensive game plan.

The Cardinals had some early success on the ground, particularly Murray on designed runs and scrambles. That opened up the short-passing game for Murray, who hit 18 of 22 passes for 95 yards and two touchdowns in the first half. He also ran six times for 32 yards.

Falling behind by two touchdowns forced Arizona to become one dimensional. Forced to pass for any chance at a comeback, the Cardinals played right into the hands of the Panthers, who ramped up their pass rush and sat back in a zone to prevent big plays.

Carolina sacked Murray eight times for 46 yards in losses and had him throwing on the run most of the second half.

"I think we can move the ball regardless, it just got predictable at the end," said Murray, who finished with 173 yards and two touchdowns, going 30 of 43. "They were pinning their ears back and got to me a couple of times."

The Cardinals had no answer and now head into next week's game against Seattle still searching for their first win.