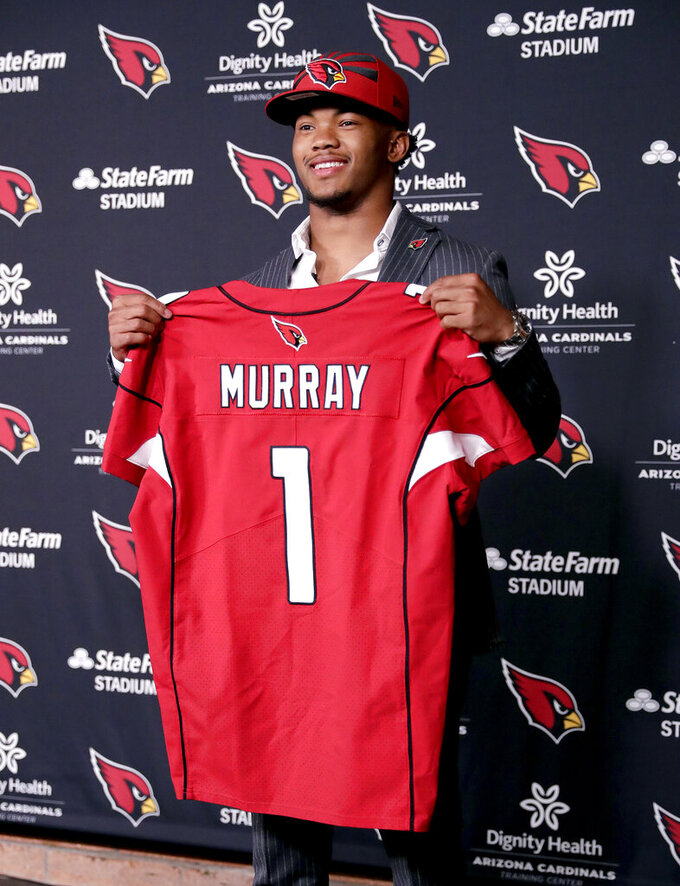 TEMPE, Ariz. (AP) — The Arizona Cardinals thought they had their quarterback of the future when they moved up five spots to take Josh Rosen at No. 10 of last year's NFL draft.

Now they have a new future.

Arizona selected a quarterback with a first-round pick for the second straight year, nabbing Heisman Trophy winner Kyler Murray at No. 1 overall. The Cardinals then shipped Rosen off to Miami, getting the No. 62 overall pick this year and a fifth-rounder next year in return.

"The more and more we dug in, the more it became crystal clear Kyler Murray was the pick," Cardinals GM Steve Keim said. "I've been doing this 20 years and I've seen guys who can throw like him, guys who can run it like him. I can tell you I've never seen the combination he brings to the table."

The Cardinals expect Murray to thrive in new coach Kliff Kingsbury's pro version of the Air Raid offense and made sure he will have plenty of targets, picking three receivers in the draft.

WHO THEY GOT: Murray was the big name, but Arizona addressed some glaring needs with the rest of the draft. The Cardinals used the 33rd overall pick on Washington cornerback Byron Murphy, hoping he can play opposite Pro Bowler Patrick Peterson. Arizona added a group of receivers for Kingsbury to play with: Massachusetts' Andy Isabella, Iowa State's Hakeem Butler, and KeeSean Johnson from Fresno State. Boston College defensive end Zach Allen, selected in the third round, should provide help on the defensive line and Alabama safety Deionte Thompson gives the Cardinals depth in the defensive backfield. Arizona closed out the draft by picking Morgan State OL Josh Miles, Temple DT Michael Dogbe and made UCLA TE Caleb Wilson "Mr. Irrelevant" by selecting him with the draft's final pick.

SURPRISE MOVE: Picking Murray and trading Rosen was a bold move, but the Cardinals believe the Heisman Trophy winner can be a transformational player.

HOW THEY DID: The Cardinals needed help on the defensive line, cornerback and receiver, so their picks should boost those areas. They also needed offensive line help but waited until the sixth round to draft Georgia center Lamont Gaillard

WHAT'S NEXT?: Murray will be the unquestioned starter heading into next season with Rosen no longer on the roster. His success will depend on whether his speed, athleticism and ability to throw at different angles will be enough to overcome his lack of size (5-foot-10) for an NFL quarterback. Murphy could start as a nickel cornerback or play opposite Peterson if recently signed Robert Alford doesn't get the job. Isabella and Butler will give Arizona speedy receiver options and Thompson a big target to go with Larry Fitzgerald and second-year pro Christian Kirk.