Chiefs, Edwards-Helaire run away with 26-17 win over Bills 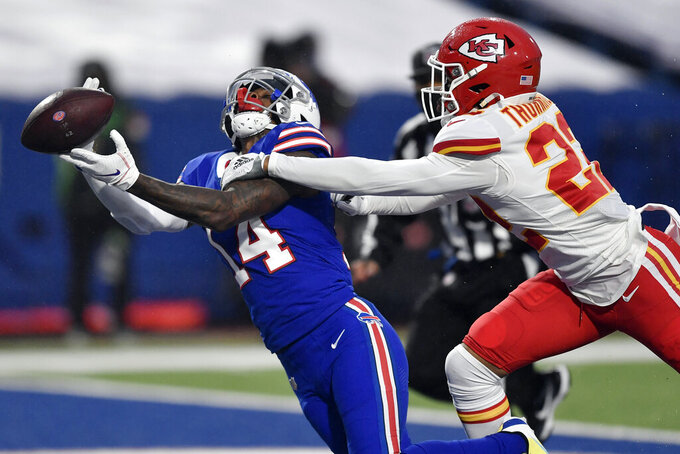 With the Buffalo Bills working hard to limit deep throws by the strong-armed Mahomes, he gladly kept handing off the ball, and Kansas City beat Buffalo 26-17 on Monday night in a game that was originally scheduled for last Thursday.

“You know my nature, I want to throw it deep every time. We want to go down and throw these long touchdowns,” said Mahomes, the 2018 MVP. “But if teams are going to play us like this, we’ve got to show we can run the football.”

Led by Edwards-Helaire’s 161 yards rushing, the Chiefs finished with 245 — the most since Mahomes took over as starter in 2017. Kansas City’s 46 rushing attempts were also the most in eight years under coach Andy Reid, and that was with newly signed Le’Veon Bell waiting to make his debut after signing with the Chiefs last Thursday.

“I can’t wait,” Bell tweeted during the game.

Edwards-Helaire has already chatted with the veteran Bell and is excited to team up.

“Another guy coming in, another piece to the puzzle. For me, we can only go up,” Edwards-Helaire said. “Anything I can do to pick his brain and gain knowledge from, I’m there for it.”

Mahomes finished 21 of 26 for 225 yards with two touchdowns, both to tight end Travis Kelce. His first touchdown was the 90th of his career in his 37th game, breaking the NFL record for fewest games to 90 TD passes. Hall of Famer Dan Marino had the previous mark at 40 games.

The Chiefs are off to a their third 5-1 start in four seasons, and they bounced back from a sloppy 40-32 loss to the Las Vegas Raiders on Oct. 11.

Buffalo (4-2) lost its second straight. The Bills fell 42-16 at Tennessee last Tuesday, a game that was moved because of a COVID-19 outbreak on the Titans. That led to the Kansas City-Buffalo game being pushed back as well. The Chiefs, who were originally scheduled to play three games in 11 days, wound up having two more days of rest than the Bills.

Buffalo's defense sold out to prevent Mahomes from going deep but proved vulnerable against the run.

“We felt we did well limiting them from taking it off the top, but the run game’s just another part of their game, and they executed it well,” safety Micah Hyde said.

The Bills were undone by allowing the Chiefs to convert nine of 14 third-down chances, two of them on a 12-play, 75-yard drive that ended on Harrison Butker's 30-yard field goal with 1:56 remaining.

During that drive, Buffalo’s Justin Zimmer stripped the ball from Edwards-Helaire at the Kansas City 30. The play was ruled a fumble on the field, but that call was overturned after replays showed Edwards-Helaire’s knee was down.

Two plays later, on third-and-11, Mahomes scrambled out of trouble and hit Byron Pringle for 37 yards. Mahomes then ate up more clock with a 9-yard scamper on third-and-7.

“Frustrating, just because we feel like as a defense we’ve got to find a way to get our offense back on the field,” Hyde said. “We had to get a stop and we didn’t.”

Josh Allen finished 14 of 27 for 122 yards with touchdown passes to Stefon Diggs and Cole Beasley.

In what was supposed to be a showdown of the NFL’s top passers, the Chiefs kept the Allen-led Bills cooling their heels on the sideline. Kansas City had four drives of 10 plays or more and dominated time of possession by more than 15 minutes.

Darrel Williams scored on a 13-yard run to cap a nearly eight-minute, 82-yard drive that put the Chiefs ahead 20-10 with 1:18 left in the third quarter.

As they’ve done all season, the Bills elected to stay in their locker room for the performance of the national anthem. The Chiefs were along their sideline, with defensive end Alex Okafor the only player spotted kneeling.

The Bills continued to play in an empty stadium because of state COVID-19 regulations.

Chiefs: T Mitchell Schwartz, who started his 134th consecutive game, did not return after the first series because of a back injury. He has the longest active streak among offensive linemen and third longest among offensive players. Okafor was ruled out after hurting his hamstring in the second quarter.

Chiefs: WR Sammy Watkins did not play after hurting his hamstring last week.

Bills: Buffalo’s defensive struggles led to a line shakeup with DE Trent Murphy and DT Harrison Phillips inactive. They were replaced by Zimmer and Bryan Cox, who were elevated from the practice squad earlier in the day.

Chiefs: At Denver on Sunday.

Bills: At the winless Jets on Sunday. Buffalo beat New York 27-17 in the season opener.