Giants have issues at wide receiver going into the season 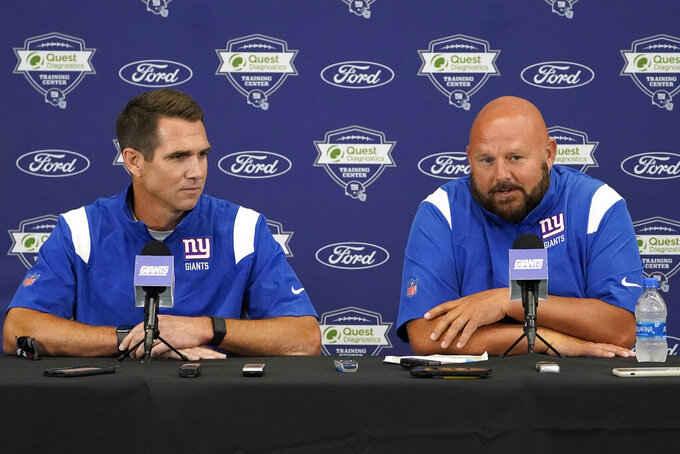 EAST RUTHERFORD, N.J. (AP) — The New York Giants have a lot of talented wide receivers and just as many issues at the position with the regular season fast approaching.

The biggest concerns start with the guys who are expected to deliver the most in Brian Daboll's new offense: Kenny Golladay and Kadarius Toney.

Golladay signed a $72 million, four-year contract before last season and delivered little in a season in which he battled a number of injuries. Toney, the 2021 first-round draft pick, had even more nagging issues and played less.

Neither caught a touchdown in the season as the Giants posted a 4-13 record. The record led to massive changes, including the firing of general manager Dave Gettleman and coach Joe Judge.

“Football is unpredictable so you can’t ever really say what’s going to happen or what’s not going to happen,” Toney said Thursday. “You can get hurt running routes on air out there. It’s not really hard to get hurt. But it’s just all about taking care of your body, all about recovery. So, I’ll just have to do a better job of doing that.”

Golladay has been the target of criticism since his poor first season. He has continually been asked about it and said last season is in the past. He won't discuss goals for this season.

“First off, I just want to remain healthy,” said Golladay, who caught 11 TDs with Detroit in 2019. “I’m very blessed that I was able to go through this whole training camp healthy. I’m able to be a part of each practice just to get that chemistry down. The rest, I’m going to keep those expectations to myself.”

Besides Toney and Golladay, veteran Sterling Shepard missed most of training camp coming back from surgery on his Achilles. Veteran Darius Slayton had some minor injuries and one catch for 17 yards. Rookie Wan'Dale Robinson, the second-round pick, looked good in camp and did little in the preseason games.

Of the receivers on the active roster, Richie James (seven) and David Sills (six) had the most catches in the preseason with James scoring a touchdown.

“I’m excited to get going, to be honest,” Golladay said. “I feel like everybody is pretty much back, healthy. We’ve got a lot of guys and some sparks that can help this offense.”

Barkley, who is as healthy as he has been in the past two years, said he will do whatever the coaches want.

“I’ve never been really one of those people to focus on your touches,” the 2018 NFL Offensive Rookie of the Year said. “I just try to make the most of my touches and every play I’m out there I try to execute and perform at a high level to help my team.”

NOTES: General manager Joe Schoen said his biggest accomplishment in his first season has been getting the salary cap to a manageable level for moves next season. ... Rookie S Dane Belton, the fourth-round draft pick, has started individual drills and hopes to be back on the field soon after a collarbone injury. He switched his number from 36 to 24. He wore No. 4 at Iowa. ... S Jason Pinnock is getting used to wearing blue instead of green after being released by the Jets and being picked up by the Giants. The best news for him is he doesn't have to leave his apartment.