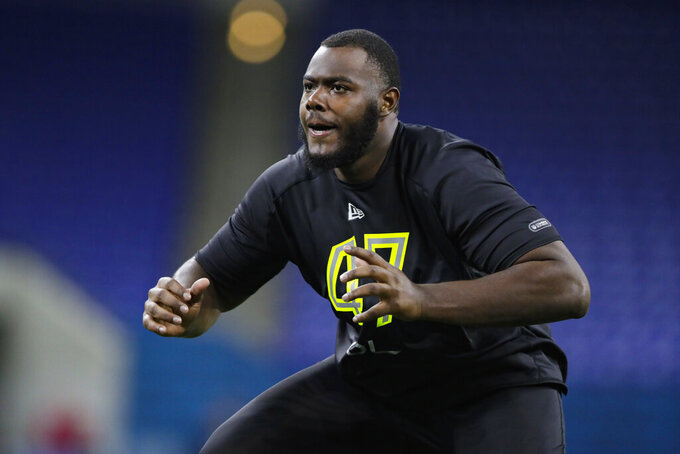 Andrew Thomas of Georgia came into the NFL draft believing he was the best offensive tackle available, and the New York Giants agreed with him.

The Giants added a security blanket for their two most recent first-round picks by taking Thomas with the fourth pick in the draft on Thursday night.

“I work hard every day to be the best,” Thomas said in a conference call. “I don't understand why you would play this game and not want to be the best. So definitely, that is something.”

Thomas started 41 games for the Bulldogs in three seasons, the last 26 at left tackle. His first season was at right tackle. The 6-foot-5, 320-pounder was considered the most complete tackle in the draft, but some experts felt others had a bigger upside.

His selection gives general manager Dave Gettleman one of his beloved “hog mollies” and a hulk who can open holes for running back Saquon Barkley and keep quarterback Daniel Jones on his feet.

“The one thing that sticks out about him if you watch the top pass rushers with maybe the exception of a couple, they had to go against him,” new coach Joe Judge said. “Watch his college tape. He's going against guys you are going to see drafted in the next couple of days. He does a heck of a job. He plays big in big games.”

Thomas kept his answers short in his 15 minutes or so with the media. Wearing a Giants cap, he talked about working hard and being prepared.

“For me, I am just focusing on what I can control. That's getting better,” Thomas said when asked about his role of making things easier for Jones and Barkley. “It's hard to tell with the pandemic going on, but just moving forward I want to communicate with the team, learn the playbook and do what I can to stay in shape for when I get on the field.”

The major question for the Giants will be whether they use Thomas on right side or left. Nate Solder has played left tackle the past two years and the right side is open after Mike Remmers signed with Kansas City.

Judge said training camp is going to determine who plays where on a line that struggled last season.

The choice was a surprise in some ways. Tristan Wirfs of Iowa and Jedrick Wills of Alabama were felt to have greater upsides.

“We spent a lot of time on this and we want to fix this up as a line once and for all,” Gettleman said. “Andrew certainly has a hell of a pedigree as a three-year starter in the Southeastern Conference. He has played against some real quality defensive ends during his college career and has played big-time ball in front of a lot of people.”

The Giants also had Clemson linebacker and playmaker Isaiah Simmons on their radar. He is an athletic defender who transitioned from safety in 2017 to a starting linebacker position in 2018 and was eventually named the Butkus Award winner as the nation’s top linebacker.

New York has made the playoffs once (2016) since winning the Super Bowl in February 2012.

This marked the third straight draft the Giants have had a top-6 pick. Two years ago they took Barkley with the second overall choice and last year they grabbed Jones with the sixth pick as their quarterback of the future.

The Giants have nine more picks in the draft. They will have four in the final round, including the last pick overall at No. 255.

New York has two picks on Friday: the 36th overall and a compensatory pick near the end of the third round, No. 99. The Giants' own third-round pick went to the Jets as part of the trade for defensive tackle Leonard Williams, who signed his franchise tender contract earlier this week.