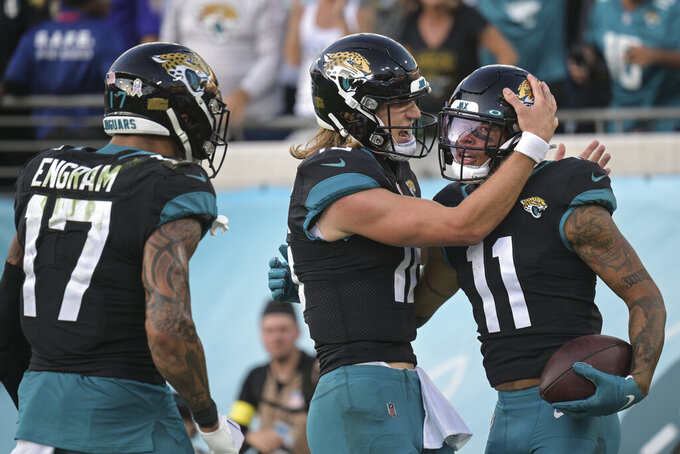 Jacksonville Jaguars wide receiver Marvin Jones Jr. (11) is congratulated by Jacksonville Jaguars quarterback Trevor Lawrence (16) after a touchdown during the second half of an NFL football game against the Baltimore Ravens, Sunday, Nov. 27, 2022, in Jacksonville, Fla. (AP Photo/Phelan M. Ebenhack)

JACKSONVILLE, Fla. (AP) — Trevor Lawrence finally looks like the generational quarterback the Jacksonville Jaguars drafted with the No. 1 overall pick in 2021.

He no longer is making progress or showing flashes or offering glimpses. The former Clemson star has emerged as the team’s primary playmaker, the ultimate centerpiece for a franchise that spent the last two decades longing for one.

He’s THE guy now, someone who makes everyone around him better. It was evident in Jacksonville’s 28-27 victory against Baltimore on Sunday, with Lawrence hitting throw after throw and rallying the Jaguars (4-7) down the stretch with big play after big play. It resulted in the highest passer rating (129.8) of his career and his third consecutive game in triple digits.

“He’s still a very, very young player,” receiver Zay Jones said. “I don’t know how many comebacks or close games that he’s had in his career that he’s came in and closed it out, hitting everybody … using his legs, commanding the offense, going down against a tough opponent where it looked bleak for a second.

“To come out on top and win, it’s got to boost his confidence.”

The way Lawrence has played the last three games, the Jaguars feel like they have a chance every time they step on the field.

He completed 76.9% of his passes for 815 yards, with six touchdowns and no interceptions against Las Vegas, Kansas City and Baltimore. Although he was sacked nine times in that stretch and lost two fumbles — turnovers that resulted in 14 points for opponents — he is rebounding from poor plays and handling adversity like a seasoned veteran.

“This guy throws an incredibly good football and he’s smart and he sees the field, and he can make all the throws,” coach Doug Pederson said. “You’re just seeing that. You’re just seeing that execution with him and that maturity with him. … So it’s a step in the right direction for Trevor. Excited for his growth obviously.”

With three consecutive passer ratings above 100, Lawrence can become the first Jaguars QB since David Garrard in 2007 to accomplish the feat in four straight games when Jacksonville plays at Detroit (4-7) on Sunday.

“We said it’s a new season once we got back from the bye week,” Lawrence said. “You can’t win seven games (in a row) until you win one. We had to start today. Obviously there was some adversity and we had to battle through it, and we just found a way. It was incredible.”

Jacksonville retooled its struggling defense during its bye week and found some success against Baltimore, specifically in the red zone. The Ravens settled for three short fields and scored one touchdown in three goal-to-go situations.

The Jaguars replaced linebacker Devin Lloyd, the 27th overall pick in April’s NFL draft, in the starting lineup with another rookie, Chad Muma, and relied on a heavy nickel scheme (three safeties) against the Ravens. They also played stretches with three inside linebackers, designed to slow down quarterback Lamar Jackson.

The defense still allowed Baltimore to convert 8 of 14 third downs. Jacksonville had been 0-4 this season when allowing six or more third-down conversions. Pass rush remains a major concern. The Jaguars managed to sack Jackson once — he had been sacked three times in each of his previous four games — and finished with just three QB hits.

Zay Jones caught 11 passes for 145 yards, both career highs, and was on the receiving end of a 2-point conversion that put the Jaguars ahead for good with 14 seconds remaining. Running back JaMycal Hasty totaled 95 yards and a touchdown, including 67 yards receiving, while subbing for Travis Etienne (foot). Linebacker Foye Oluokun finished with a career-high 18 tackles, including 13 solo stops.

Lloyd played a season-low 27 snaps after being replaced by Muma in the starting lineup. He finished with two tackles. Muma had nine tackles and is expected to retain the starting spot against the Lions.

Pederson said Monday that Etienne has a sprained left foot but should be good to go against Detroit. It's the same foot that Etienne had surgery on as a rookie last year. … Starting CB Shaquill Griffin (back) is eligible to return from injured reserve this week.

19 — Number of consecutive losses by the Jaguars against NFC teams. It's an NFL record.

Jacksonville has a chance to end two skids over the next two weeks. First up is the NFC losing streak against the Lions and then the Jaguars play at Tennessee, where they last won in 2013. The Titans have won eight in a row against Jacksonville in Nashville.