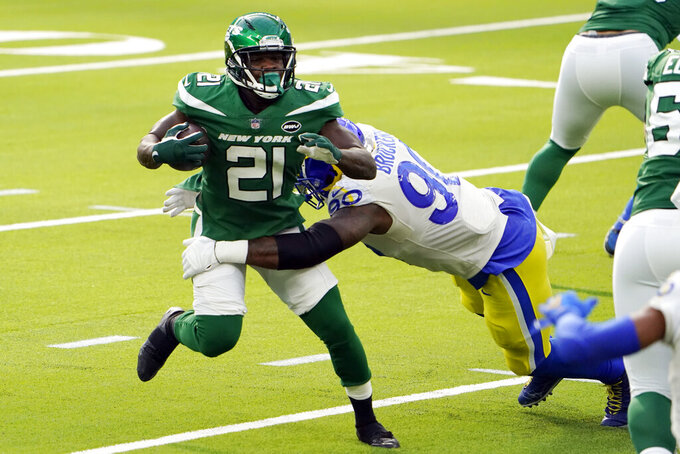 NEW YORK (AP) — Frank Gore reached a milestone on his final carry of the game — and maybe of his career.

The 37-year-old New York Jets running back has a bruised lung that coach Adam Gase said Monday will keep Gore out of the season finale at New England on Sunday.

Gore, who became the third player in NFL history to run for 16,000 yards, was hurt in the fourth quarter of the Jets' 23-16 victory over the Cleveland Browns on Sunday. It was originally called a chest injury by the team after Gore left, but tests revealed the lung contusion.

“That's going to be one of those ones where he will not be available for a few weeks,” Gase said. “Obviously, with one game left, he won't be able to finish that last game.”

Gore recently said he hadn't decided on whether this would be his final season, and would speak to his family during the offseason while weighing things. Gase said Gore hasn't discussed his plans beyond this season.

Gore signed a one-year deal worth $1.05 million with the Jets last May and will be a free agent in the offseason.

“You just never know,” said Gore, who turns 38 on May 14. “I've got to be real with myself, how teams think about my age. They might not want a 38-year-old running back on the team. It's tough because I don't know about next year.”

Gore finishes this season with 653 yards rushing and two touchdowns, but a career-low 3.5 yards per carry. He also caught 16 passes for 89 yards, including a 6-yard reception on third down against the Los Angeles Rams that sealed the Jets' first victory of the season last week.

Gore has also left a mark on his Jets teammates this season with his tireless work ethic and love for the game — even while the Jets were winless through the first 13 games.

“He's amazing,” quarterback Sam Darnold said. “All the young guys on the team, including myself, look at him and you just want to embody everything that he shows on a day-to-day basis. It's so consistent, and that's why he's had such a long career. That's why he's had the career that he's had, is because he's so consistent day in and day out, regardless of circumstances. ...

With Gore sidelined for the finale, the Jets will use La'Mical Perine, Ty Johnson and Josh Adams against the Patriots.

Gore, who overcame two torn ACLs in college at Miami, spent his first 10 NFL seasons in San Francisco, then three in Indianapolis, followed by one-year stints in Miami and Buffalo before joining the Jets.

“I can't say enough as far as what he's done by leading by example.”