Jones may be back as Giants' starting QB vs Redskins 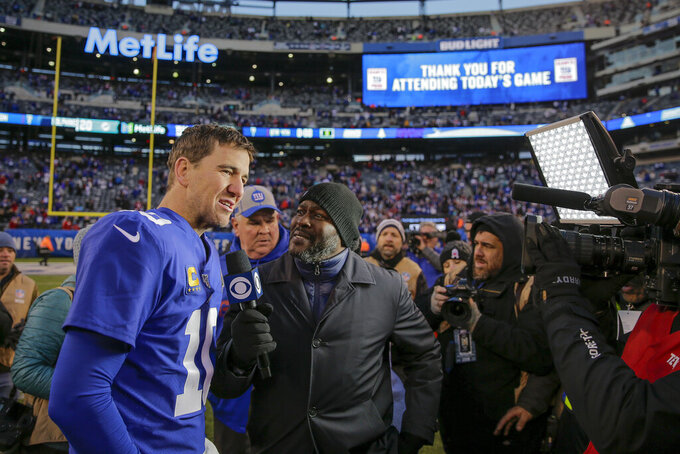 Jones took most of the first-team snaps at practice Wednesday, a major indication the rookie will start Sunday in the penultimate game of the season against the Washington Redskins (3-11) .

“He’s doing better than he did a week ago," Giants coach Pat Shurmur said of Jones on Wednesday. “I think he’ll be able to do much more in practice this week. I still think it’s too early to kind of predict his status for Sunday.”

If Jones does play, it will set up a rookie matchup against Dwayne Haskins. Jones was the No. 6 pick overall in the draft last spring. Haskins was taken with the 15th pick.

Jones said his ankle is feeling better and he believes he is closer to playing.

“It feels good, it feels like I can do everything I need to do,'' Jones said. “Keep working through and hopefully I can continue to improve throughout the week."

Jones said he learned by watching Manning the past two weeks.

“You see things from a different point of view and I think that helped,'' Jones said. “(I’ll) continue to work the ankle this week and hopefully get back out there.''

Manning started the first two games of the season for the Giants, losses to Dallas and Buffalo. Coach Pat Shurmur gave Jones the starting job in Week 3 against Tampa Bay.

Jones’ biggest problem this season has been turnovers. He has thrown 11 interceptions and lost 10 fumbles. It's a major reason the Giants are a minus-15 in turnover differential, the third worst in the NFL this season.

“Ball security is obviously the big thing and making sure that I’m doing my part in protecting the ball,” Jones said. “Making sure as an offense we’re protecting the ball. That way it gives us the best chance to win. That’s the most important thing in these last two weeks, is to win games."

NOTES: Defensive back Rashaan Gaulden was signed off the practice squad. He takes the spot that opened after DB Janoris Jenkins was waived-injured. ... DE Kevin Wilkins, who played at Rutgers, was signed to the practice squad. ... TE Evan Engram was elected the winner of the 19th annual George Young Good Guy Award, as voted on by the Giants' chapter of the Professional Football Writers of America. Engram, who was put on injured reserve with a sprained foot on Tuesday, is scheduled to have surgery on Friday.