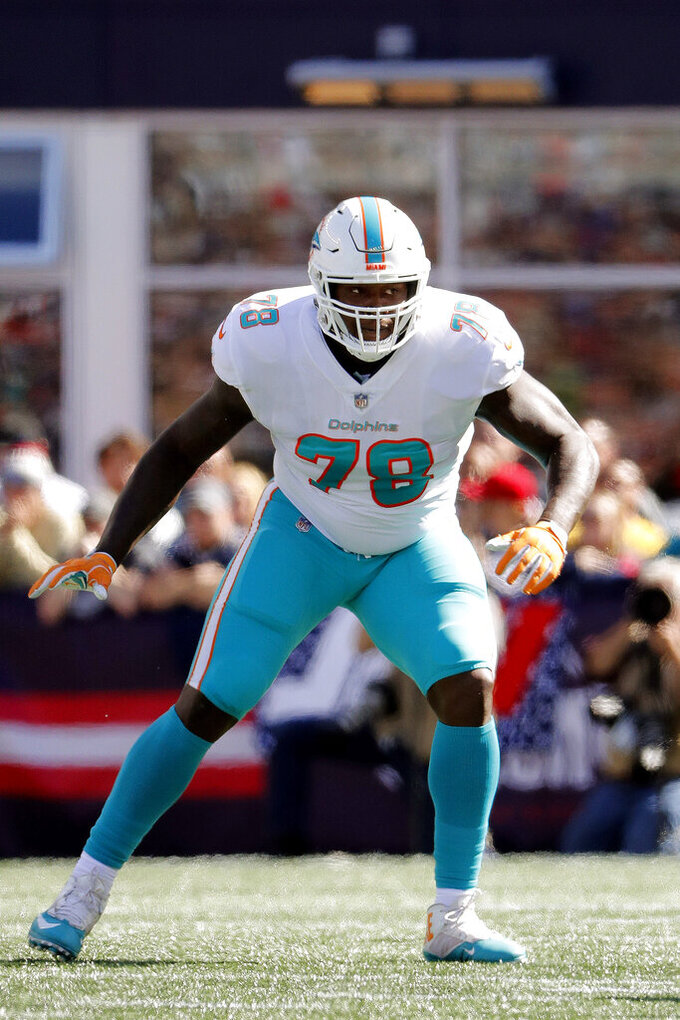 FILE - In this Sept. 30, 2018, file photo, Miami Dolphins offensive tackle Laremy Tunsil is shown during an NFL football game against the New England Patriots at Gillette Stadium in Foxborough, Mass. Tunsil stands out in Miami, and not just because he’s 6-foot-5 and 313 pounds. He’s one of perhaps only two elite players the roster, but says there’s still room for improvement _ he wants to become a more vocal leader. (AP Photo/Winslow Townson/, File)

Standing in the middle of the locker room after a recent practice, he assessed his efforts.

"Pretty good!!" Tunsil shouted, startling the entire room. He then turned to his fellow offensive linemen and to the socks, shoes and athletic tape strewn at their feet.

The only response was laughter.

"It doesn't work," Tunsil said, with a shrug. "We're still getting there."

Even the Dolphins' best offensive player has room to improve.

A first-round draft choice in 2016, Tunsil anchors an otherwise shaky line and serves as the foundation for an offense in the early stages of a makeover under first-year coach Brian Flores.

Tunsil hasn't made the Pro Bowl, but that's partly a function of being on a bad team. If he played left tackle for, say, the Patriots, he'd likely be famous as Tom Brady's best friend.

"L.T. obviously is a very talented guy," Dolphins quarterback Ryan Fitzpatrick said. "I think everybody in that huddle feels safe around him."

Despite his low national profile, Tunsil stands out in Miami, and not just because he's 6-foot-5 and 313 pounds. He's one of only two elite players the roster, with cornerback Xavien Howard the other.

Even so, Tunsil wants to be heard from more. Quiet by nature, the Ole Miss alum said it's time for a crescendo from his rumbling Southern baritone.

"It's still something that I need to work on — being more vocal with the guys," he said. "It's Year 4 for me, and it feels like Year 10. Now I'm the vet in the room, and I've got to bring the rookies up."

That sounds good to Flores as he tries to create a winning culture on a team that hasn't won a playoff game since Tunsil was a first-grader.

"We're looking for leadership from Laremy," Flores said. "He has that capability. He's a very good player, well-respected on the team. He's trending in that direction and I like seeing it."

In April, the Dolphins exercised a fifth-year option on Tunsil's rookie contract for $10.35 million in 2020. He hopes to sign an extension at some point because he likes the stability that comes from staying with the same team.

"I would love to be with one organization for the rest of my career," he said.

He's already feeling like an old hand in Miami, partly because two rookie guards, Michael Deiter and Shaq Calhoun, may start the season opener next week. Tunsil is trying to draw from lessons learned during his rookie season, when he started at guard next to tackle Branden Albert, then 32 and in his final NFL season.

"He was the model guy," Tunsil said. "He helped me improve and mature."

That maturity is by a player who made national headlines when a bizarre video of him smoking from a gas mask-bong contraption was posted on his Twitter account shortly before the 2016 draft began. That's the reason he was still available when the Dolphins took him with the 13th pick.

"It would be a long conversation," he said. "We'll leave that alone."