NFL to appeal ruling in Gruden lawsuit over leaked emails 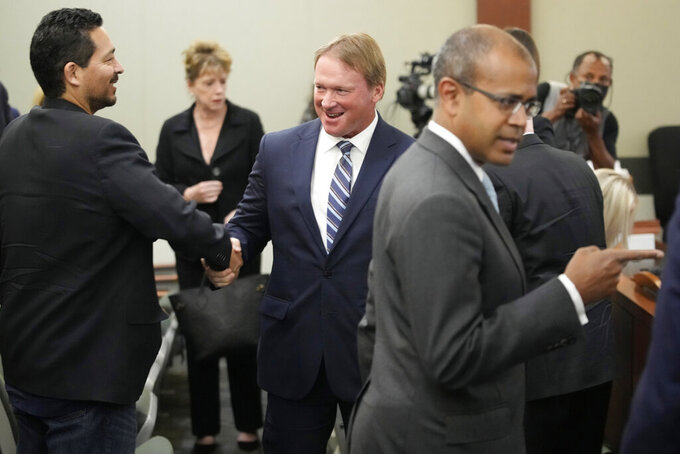 Jon Gruden, center, appears in court Wednesday, May 25, 2022, in Las Vegas. A Nevada judge heard a bid Wednesday by the National Football League to dismiss former Las Vegas Raiders coach Jon Gruden's lawsuit accusing the league of a "malicious and orchestrated campaign" including the leaking of offensive emails ahead of his resignation last October. (AP Photo/John Locher)

LAS VEGAS (AP) — The NFL said Wednesday it will appeal a ruling denying a request to move former Las Vegas Raiders coach Jon Gruden’s lawsuit against the league from a public courtroom into closed-door arbitration. Gruden's lawsuit accuses the NFL of leaking his racist, sexist and homophobic emails to force him to resign last October.

“Neither the NFL nor the Commissioner (Roger Goodell) leaked Coach Gruden’s offensive emails," the league said in a statement issued after Clark County District Court Judge Nancy Allf rejected league bids to dismiss Gruden’s claim outright or to order out-of-court talks that could be overseen by Goodell.

The judge pointed to Gruden’s allegation that the league intentionally leaked only his documents. She said that could show evidence of “specific intent,” or an act designed to cause a particular result.

The judge's ruling in the case that Gruden filed last November marked the first public skirmish in what could become a long legal battle pitting the coach who departed the Raiders with more than six seasons remaining on his record 10-year, $100 million contract against Goodell.

Attorneys for both sides declined to comment following a 90-minute hearing before Allf.

Gruden emerged from the courtroom declaring “Go Raiders" and told reporters as he walked to an elevator that he was “just going to let the process take care of itself.”

Goodell did not attend the hearing. The civil case alleges contract interference and conspiracy by the league and seeks monetary damages for Gruden.

“The court’s denial of our motion to dismiss is not a determination on the merits of Coach Gruden’s lawsuit,” said the NFL statement provided by spokesman Brian McCarthy.

The NFL has a responsibility to act, league attorney Kannon Shanmugam argued in court, in cases involving “conduct detrimental to the best interest of the league or professional football.”

Gruden attorney Adam Hosmer-Henner told the judge that putting the case in the hands of Goodell, a named defendant in the lawsuit, would pose an “unconscionable” conflict-of-interest.

Hosmer-Henner said also that Gruden's contract with the Raiders — including a clause requiring arbitration to resolve disputes — became void when he resigned. Gruden had no contract with the league, the attorney said.

Gruden accuses the NFL and Goodell of destroying his career and scuttling endorsement contracts by releasing emails that no one disputes Gruden sent — and that Shanmugam told the judge contained “racist, misogynistic and homophobic” language unfit for repetition in a public courtroom. Some also reportedly derided Goodell.

Attorneys said the electronic messages came from among some 650,000 obtained by the league almost a year ago during a probe of the workplace culture of the Washington NFL franchise now called the Commanders.

The messages were reportedly sent from 2011 to 2018 by Gruden to several people including former Washington team owner Bruce Allen while Gruden was an announcer at ESPN.

Gruden coached in the NFL from 1990 to 2008, including head coaching stints with the Oakland Raiders and Tampa Bay Buccaneers. He was hired by the Raiders again in 2018, the team’s first year in Las Vegas.

Hosmer-Henner did not challenge the validity and content of the emails. But he complained that neither Gruden’s lawyers nor the judge had seen the actual messages, and the public only heard accounts about them in the media.

“What is going to be an issue is (the league) ... leaking those emails to the press, selectively, and then demanding that Mr. Gruden be fired by the Raiders,” the attorney said.

“They pressured the Raiders to fire him,” Hosmer-Henner told the judge. “And when the Raiders didn’t, and he coached through that weekend, (the league) continued to threaten that more documents would be leaked.”

Raiders owner Mark Davis said in late October that the team reached a settlement with Gruden over the final six-plus years of his contract. Terms of the settlement were not disclosed.