No decision yet as close call looms on Dolphins starting QB 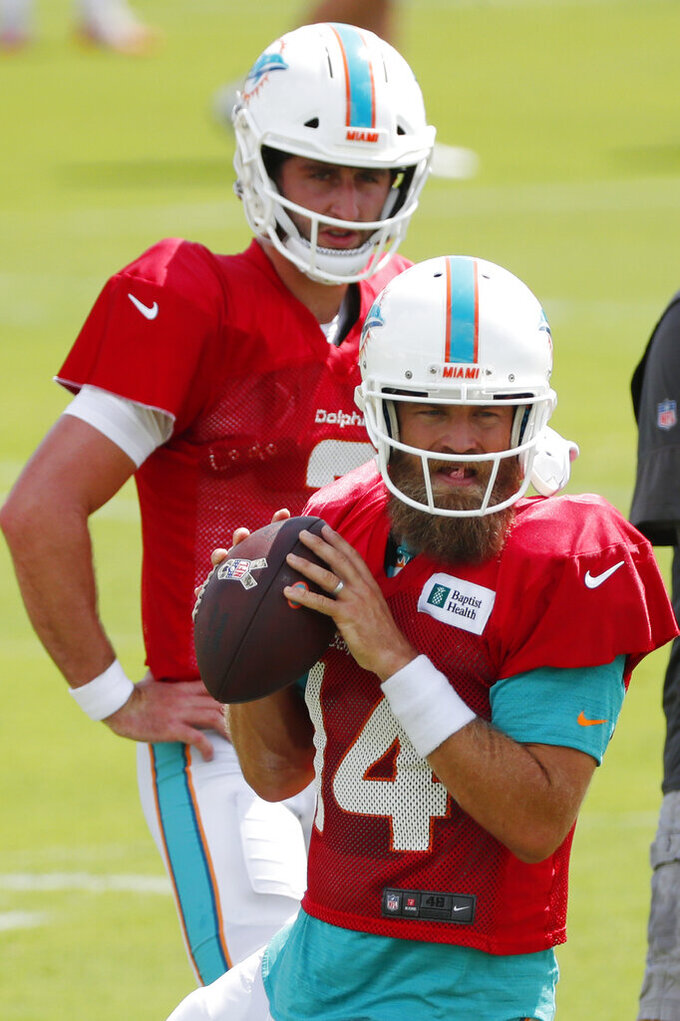 Miami Dolphins quarterback Ryan Fitzpatrick, foreground, runs a drill as quarterback Josh Rosen looks on during practice at the NFL football team's training camp, Monday, Aug. 19, 2019, in Davie, Fla. Fitzpatrick is expected to start the Miami Dolphins' exhibition game this week, which suggests he's still the front-runner in his battle with Rosen for the starting job. (AP Photo/Wilfredo Lee) 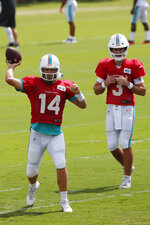 DAVIE, Fla. (AP) — Choosing the Miami Dolphins' quarterback has become a close call, mostly because both candidates have been only so-so, and coach Brian Flores isn't ready to announce his decision.

He is not sure he'll be ready before the final exhibition game, either.

Ryan Fitzpatrick is expected to start the third game of the preseason Thursday against Jacksonville, with Josh Rosen coming off the bench. But that doesn't mean Fitzpatrick has clinched the No. 1 job, Flores said Monday, even though the Dolphins are treating the game as a dress rehearsal for the season opener Sept. 8 against Baltimore.

Flores said he might announce his choice after the Jacksonville game, and before the final exhibition game next week.

"Potentially," Flores said. "We'll have most of the evaluation done. Potentially we would be able to make that call. But we may not."

It's possible the first-year coach has made up his mind and wants to keep future opponents guessing. Or perhaps he is still waiting for one of his quarterbacks to make a stronger case for the job.

Both quarterbacks seem fine with the prolonged uncertainty.

"Whatever coach wants to do, whenever he wants to put me in or not put me in, I'm here and ready," Fitzpatrick said.

Said Rosen: "Those decisions about playing or not are above me. I'm just trying to show my skills."

Both were up and down last week in Tampa Bay during joint practices and then a game against the Buccaneers.

If the quarterbacking has been mediocre, so has the rest of the offense. Blocking, penalties and dropped passes have all been problems.

"There are a lot of things we could do better offensively," Flores said. "Some of those are not on the quarterback. We need to clean those things up to get a good evaluation of the entire offense."

While the QB situation remains unsettled, Miami may be set in the offensive line with undrafted rookie Shaq Calhoun and third-round pick Michael Deiter starting at the guard spots.

"I feel good about the five guys that are rolling right now," Flores said.

If Fitzpatrick gets the nod at quarterback, it will be partly because of his extensive experience. He can become the first player to throw a pass for eight NFL teams.

Rosen was discarded after only one season by the Arizona Cardinals, who took him in the first round of the 2018 draft, and the Dolphins believe he can become a franchise quarterback. To do so, he needs to play, and he is certain to get his chance at some point this year.

Perhaps for that reason, he is taking a long view on the quarterback competition.

"Each day I'm just trying to execute our plays the best I can," Rosen said. "I'm just keeping my head down, more of a microscope perspective, as opposed to a telescope."