Panthers look for continued growth from Allen vs. Redskins 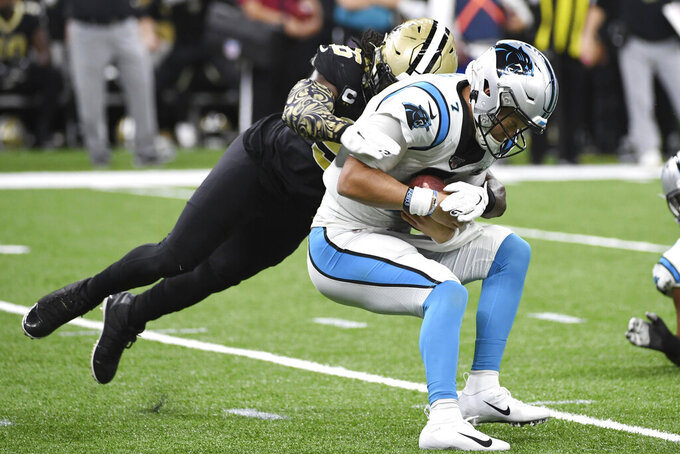 In other games, the second-year quarterback has looked like a potential long-term replacement for Cam Newton.

On Sunday, Allen faces the Washington Redskins (2-9) looking to build on a three-touchdown performance in a 34-31 loss to the New Orleans Saints last Sunday and continue to gain confidence and experience.

“He’s still growing and he’s still a work in progress,” Panthers coach Ron Rivera said. “But at the same time he’s done some really good things that have given us an opportunity to win. We’ve won some with him and lost some. But most games he’s given us a chance to win and that’s what you’re looking for.”

Allen said he hasn’t had a chance to look back and evaluate his performance this season, but said his biggest goal needs to be continuing to cut down on turnovers.

The second-year quarterback began his career with five straight wins but has since lost four of his past five he’s started, including the past three. He’s thrown for 13 touchdowns and turned the ball over 14 times — nine on interceptions and five on fumbles.

Allen said he feels the Panthers (5-6) are “close” to turning in a complete game after a tough loss last week to one of the NFC’s top teams.

“I know there are things every week I am trying to get better at, and it’s been tough the last stretch of five games,” Allen said. “We’re trying to piece some things together. But I know as a team we are going to keep fighting and really trying to pull it all together.”

Redskins rookie quarterback Dwayne Haskins said missing the final snap last week against Detroit while taking selfies with a fan was a mistake that won’t happen again. After complaining a sore right wrist contributed to completing just 13 of 29 passes and missing some open receivers, the 15th overall pick said he’s good to go and will try not to make those overthrows again. “I just missed, wasn't gripping the ball the way I usually do,” Haskins said. “Good thing I know those guys are going to get open and make plays for me. So I'll learn from it.”

D.J. Moore seems to be developing into the No. 1 receiver the Panthers hoped he would become following a productive November. In four games, Moore caught 30 passes for 442 yards and two touchdowns, including six catches for 126 yards against the Saints with two TDs. He enters Sunday’s game with a streak of four straight games with at least 95 yards receiving. “His run-after-the-catch (numbers) have been awesome,” Allen said. “When he gets that ball in his hands he’s tough to tackle.”

For the first time since taking over for Jay Gruden, interim Redskins coach Bill Callahan seems to have really gotten through to players. Callahan ripped into his team the night before the Lions game, it ticked off some players but fired up others. Expect his brand of tough love and hard criticism to continue. "I loved it,” defensive lineman Jonathan Allen said. “I come from Coach (Nick) Saban, so I'm used to that. That didn't bother me one bit at all. I guess it worked."

The Panthers are sticking with kicker Joey Slye this week despite the rookie missing two extra points and a go-ahead field goal attempt late in the fourth quarter last week against the Saints. The team had signed Greg Joseph to the practice squad earlier in the week. Slye said the problem is his plant foot was “too deep” in his motion, which has been causing his kicks to sail to the right. “I purposely have to slow myself down,” Slye said. Rivera said the team is trying to be patient with Slye but as for his future, he said, “We’ll see.”