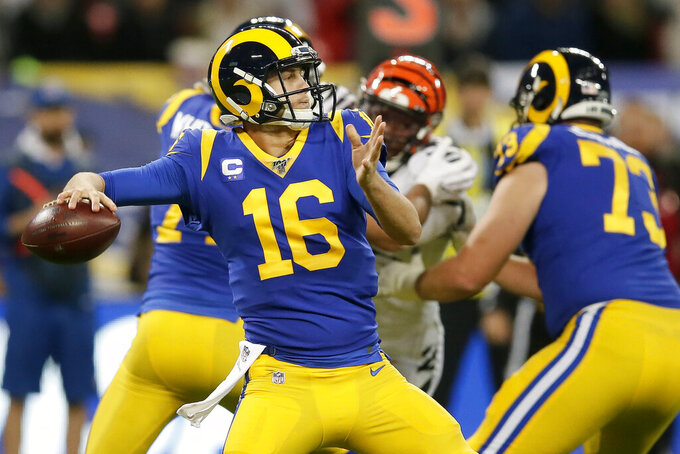 Los Angeles Rams quarterback Jared Goff (16) passes against the Cincinnati Bengals during the first half of an NFL football game, Sunday, Oct. 27, 2019, at Wembley Stadium in London. (AP Photo/Tim Ireland) 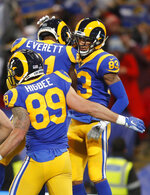 LOS ANGELES (AP) — The Los Angeles Rams' longest road trip is finally over, and nothing fights jet lag better than a couple of wins.

The defending NFC champions have hit their bye week at 5-3 after back-to-back victories away from LA. The Rams routed Atlanta at the site of last season's Super Bowl defeat, and they spent the ensuing week in Georgia before crossing the Atlantic for a comfortable 24-10 win over the Cincinnati Bengals in London.

Coach Sean McVay gave his players a week off after the 10-day trip and the long flight home, providing the chance to focus on what went right during their time away. The Rams are 18-4 in the regular season outside Los Angeles during McVay's tenure, easily the NFL's best away mark in that span.

"I thought it came at a good time to get away and have an almost camp-like setting in the middle of the season where it was just about us," McVay said. "We got a chance to spend a little bit more time together than you would otherwise, and I thought our guys responded in the right way. And to be able to go 2-0 in that stretch is exactly what you can do."

Two wins over opponents with one victory combined this season won't answer every question that arose during the Rams' three-game losing streak, but they showed signs of progress on both sides of the ball.

"It feels good to be going into the bye and building momentum," running back Todd Gurley said.

They also have had two games with new cornerback Jalen Ramsey, whose presence alters the back end of Los Angeles' defense. The Rams have no remaining healthy first-stringers from last season's Super Bowl secondary except nickel back Nickell Robey-Coleman, and the new group needs playing time together.

The Rams have plenty of issues, but they feel they've got time to address them before a December schedule with four NFC West showdowns.

"We are having fun right now," quarterback Jared Goff said. "These last two weeks, we feel like ourselves, and we feel like we're doing what we should be doing offensively, and the defense is coming around and starting to mesh and jell, and it's the perfect time."

The Rams' passing offense is fourth in the league with 287.2 yards per game. While this ranking comes with the usual caveat about falling behind in games and being forced to throw constantly in comeback mode, Goff and his receivers are having enough success to make up for the Rams' up-and-down running game and inconsistent contributions from Gurley. McVay's offense isn't close to its purring peak, but it's getting the job done in tough circumstances.

Gurley has gone nine straight games without a 100-yard rushing performance, the longest stretch of his career since early 2017. His only 100-yard game since Dec. 2, 2018, came in the playoffs against Dallas last January. Despite its recent passing success, McVay's offense has a ceiling on how good it can be if Gurley and his backups aren't running the ball well.

Receiver Cooper Kupp had another dominant game, racking up a career-high 220 yards on just seven catches. With five 100-yard games already this season, there's no longer any doubt that Kupp came back stronger and more elusive from the knee injury that ended his 2018 season near the midway point. He has reached 160 career catches in just 31 games, the quickest by a Rams receiver in the Super Bowl era.

Malcolm Brown's unfortunately timed ankle injury might have ruined his last, best chance to get significant action with the Rams. Brown was unavailable for most of the past three games, and rookie Darrell Henderson has stepped into the increased role for a backup running back in an offense dominated by Gurley for the past two seasons. Henderson led the Rams with 49 yards rushing against Cincinnati, and Brown might find himself the third option when he returns.

Receiver Brandin Cooks is in the concussion protocol for the second time this season after being suspected of incurring a head injury for the fourth time in less than two years. The Rams didn't immediately announce Cooks' prognosis, but losing their big-play threat for a significant length of time would be a setback.

4½ — The number of sacks by Dante Fowler during the two-game road trip. After playing five straight games without a sack, the veteran pass rusher on a one-year contract seized his chances to disrupt two opposing offenses right when the Rams needed a contribution from somebody other than Aaron Donald.

A week of rest before they begin the second-half stretch with another road trip to Pittsburgh. The schedule gets tougher, but the Rams are hoping they're getting better.