Browns lean on bond to support Smith after girlfriend killed 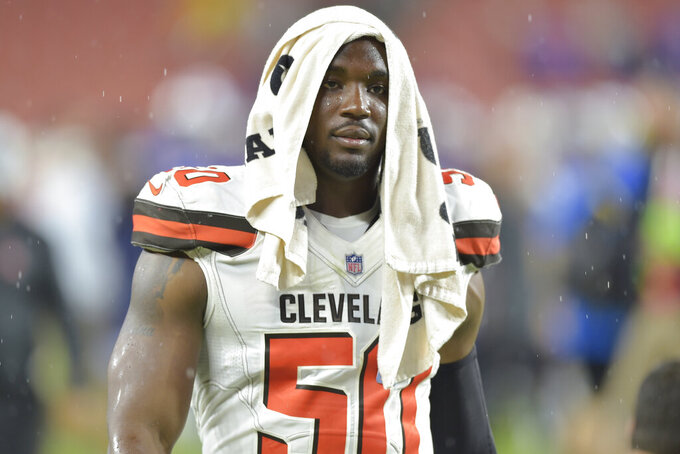 FILE - In this Aug. 17, 2018, file photo, Cleveland Browns defensive end Chris Smith (50) walks off the field after an NFL football preseason game against the Buffalo Bills, in Cleveland. Browns coach Freddie Kitchens said his team is “hurting” for defensive end Chris Smith after his girlfriend was killed in an accident. Petara Cordero, who recently had a daughter with Smith, was struck by a car as she stood on the roadside Wednesday, Sept. 11, 2019. Smith’s car had blown a tire and the 26-year-old Cordero exited the vehicle when she was stuck by an oncoming car driven by a woman who admitted to police she had been drinking. (AP Photo/David Richard, File)

BEREA, Ohio (AP) — Chris Smith's football family is comforting him through the toughest days of his life.

Smith was surrounded by most of his Browns teammates Wednesday, hours after the popular defensive end watched helplessly as his girlfriend was killed in a horrific accident as they were driving home.

The Browns' bond has stretched beyond the field for Smith.

Early Wednesday morning, Petara Cordero, who gave birth to the couple's daughter last month, was struck by a car as she stood on a highway roadside. Smith told police a tire on his Lamborghini blew out and caused his car to spin and crash on I-90 West of Cleveland. The 26-year-old Cordero exited the vehicle and she was stuck by an oncoming car driven by a woman who admitted to police she had been drinking.

No charges have been filed, and toxicology reports are pending.

The police said Smith was not impaired or injured.

The loss has rocked the Browns.

"Chris is one of those guys — his smile is infectious, his personality is infectious," coach Freddie Kitchens said Thursday. "He's just overall well-liked. Of course, everybody in that locker room's hurting for him."

As the Browns prepared to play the New York Jets on Monday night, many of the players expressed condolences for Smith as well as Cordero's family.

"That was a real punch in the gut," left guard Joel Bitonio said. "The whole team is thinking about him every chance we get. That's one of our brothers. To be in that situation, I couldn't put myself in that situation."

"I can't put it into words," Bitonio said. "It's hard for me to truly accept and understand what's going on for him. I just know how tough it would be for me to be in that situation right now. I'm just really, really praying for him."

Kitchens said the tragedy has weighed heavily on him.

Kitchens visited Smith at his home on Wednesday. The 27-year-old, who also played in Cincinnati and Jacksonville, is in Cleveland's defensive rotation, but Kitchens doesn't know when he'll be back on the field.

"I have not even given one thought about that and I don't want Chris to even think about that," Kitchens said. "I told him yesterday, this is beyond this. We can make it whatever we want to."