Colts searching for a fix after another ugly offensive game 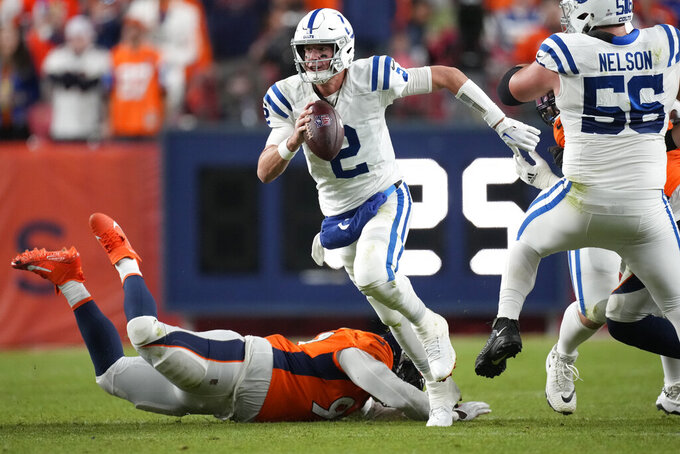 Indianapolis Colts quarterback Matt Ryan (2) scrambles against the Denver Broncos during the first half of an NFL football game, Thursday, Oct. 6, 2022, in Denver. (AP Photo/David Zalubowski)

Instead, they turned most football fans off with another dismal offensive performance. They allowed six more sacks, had two more turnovers and failed to score a touchdown for the second time this season. But the Colts still won 12-9 in overtime in Denver.

The league’s lowest-scoring offense has a few extra days to find a fix — its next game isn't until Oct. 16. And the reality is if the Colts can't change their ghastly numbers, they won't make the playoffs.

Indy (69) and Chicago (64) are the only NFL teams to score fewer than 70 points this season — and the Bears can break away from the pack Sunday.

The Colts enter this weekend tied with New Orleans for the league's most giveaways (11). Quarterback Matt Ryan has 11 fumbles, matching the second-highest single-season total of his 15-year career. He's one short of a single-season career high and on pace for 37, which would shatter the NFL record (23).

And while the Colts (2-2-1) played without injured defending rushing champ Jonathan Taylor and lost his replacement, Nyheim Hines, to the concussion protocol before most people tuned in Thursday, their offensive line is in shambles. It's given up a league-worst 21 sacks.

“We’re obviously in a slump of scoring points, the facts are the facts,” coach Frank Reich said of Indy’s seven-game streak of scoring 20 or fewer points. “There are a lot of things that go into that — play-calling is certainly one of them. I’m always evaluating that.”

Indy climbed back to .500 and clawed its way back into the postseason picture by making field goals in the waning seconds of regulation and on the first drive of overtime.

But without Stephon Gilmore's interception with a little more than two minutes left in regulation or his pass break up on the game's final play — both in the end zone to thwart the Broncos' scoring chances — the Colts wouldn't have been celebrating.

They would have spent the rest of this season chasing others as they've done the past few seasons.

So Reich and his staff will spend this extra-long weekend mulling solutions.

Kicker Chase McLaughlin. The defense has been among the league's stingiest — and McLaughlin has been the most reliable scoring option. Since rejoining the Colts in Week 2, he's made all four extra points and seven of eight field goals, including two late ones Thursday.

Gilmore. Indy's offseason investment paid big dividends when Gilmore played like the 2019 NFL defensive player of the year, coming up with two of the biggest plays in Thursday's game.

Bernhard Raimann. Indy tried the rookie at left tackle and he drew four penalties in the first half, three for holding. He was marginally better in the second half and should improve with more playing time, but was overmatched in his starting debut.

In addition to Hines, DE Kwity Paye was carted off the field in the second with an ankle injury. Reich said X-rays were negative and they hope he can return soon. Danny Pinter replaced Pro Bowl center Ryan Kelly (hip) following Ryan's first interception. WR Ashton Dulin did not return after hurting his foot. The Colts also are hopeful Taylor and three-time All-Pro LB Shaquille Leonard (concussion, fractured nose) could play in the Jacksonville rematch.

One. Ryan's five-touchdown, seven-interception totals are troubling, but the bigger concern should be the run production. Despite having one of the league's top rushers, Indy is one of four teams with a single rushing TD this season.

The defense certainly is good enough and McLaughlin's emergence has provided a special teams boost. But if the offense can't get in sync soon, every game could look like Thursday night's. The most essential component of the mini-bye week will be finding an offensive line that can keep Ryan upright and clear holes for runners.