Column: Shula should be remembered for more than wins 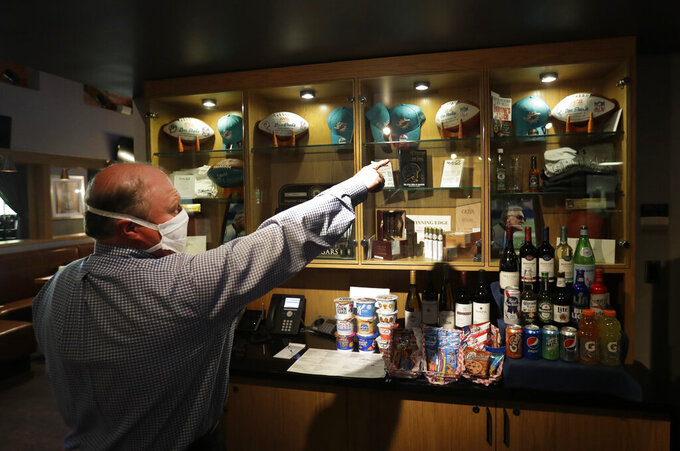 Tom Valentin, Director Of Food And Beverage for Shula's Hotel & Golf Club, shows off some memorabilia associated with former Miami Dolphins head coach Don Shula, Monday, May 4, 2020, at the hotel and golf club in Miami Lakes, Fla. Shula died Monday at his home in Indian Creek, Fla. He was 90. (AP Photo/Wilfredo Lee)

Success for athletes and coaches usually is measured by numbers. That’s a too-limited way to encapsulate the impact of Don Shula on professional football.

Sure, the numbers are astounding:

— Most coaching victories in a career, 347, including playoffs and Super Bowls.

— Ten victories or more in 21 of those years.

— A record four Coach of the Year awards.

— And, of course, 17-0 in 1972 with a team that, talent-wise, probably didn't measure up to the great Steel Curtain rosters or 49ers squads that never approached such a mark.

No, the numbers can't and shouldn't be ignored. They should be glorified, and Shula even mentioned that on more than one occasion when asked about his legacy.

But there was so much more to Shula, who died Monday at age 90.

Start with his adaptability. A defensive back for seven NFL seasons with three teams, Shula emphasized that side of the ball as a quickly rising assistant coach and later as the head man.

His Dolphins won two Super Bowls with a power running game and a “No- Name Defense" that perfectly executed his schemes.

Yet in 1983, when Dan Marino somehow slipped to the 27th spot in the first round of a quarterback-rich draft, Shula pounced. Then he retooled the offense to match the nonpareil passing skills and gamesmanship of Marino.

“There are two ways to look at having the opportunity to coach a great quarterback,” Shula once said — and he certainly knew, having worked with Hall of Famers Johnny Unitas, Bob Greise and Marino. “One is to fit him into what your team has always done and let him lead, which was how Bob fit in and became a great quarterback. The other is to fit your team's playing style to what your quarterback does best, and that was how it was with Dan.”

Griese was at the helm for Shula's two Super Bowl victories, though he passed a total of 18 times in those wins, instead engineering Shula's run and defend game plan to the hilt.

Marino got to only one Super Bowl — Shula's inability to build a champion around his quarterback was his biggest regret. But in his prime, Marino and Miami's pass-first attack was the NFL's most-feared offense.

Shula wasn't the first coach to embrace the importance of special teams, but he was among the groundbreakers in that area. He made them such a priority that he gave Mike Westhoff — considered by some the Don Shula of special teams coordinators — tons of freedom.

Miami regularly was among the league leaders with its kick teams.

“Don Shula was the most thorough coach you could possibly work with,” Westhoff said.

Shula also was a stickler for fair play, an influential voice on the NFL's powerful competition committee. He once succinctly noted that he had “one rule about the rules. Obey them.”

When the Patriots were caught spying on opponents' sidelines in 2007, Shula loudly criticized New England's coaching staff. Coincidentally, those Patriots were the strongest challenger to a perfect season before losing in the Super Bowl.

Indeed, Shula's effect in that area was cited by current Commissioner Roger Goodell in his tribute to Shula on Monday.

“Don Shula will always be remembered as one of the greatest coaches and contributors in the history of our game," Goodell said. “He made an extraordinarily positive impact on so many lives. The winningest coach in NFL history and the only one to lead a team to a perfect season, coach Shula lived an unparalleled football life. As a player, Hall of Fame coach, and long-time member and co-chair of the NFL Competition Committee, he was a remarkable teacher and mentor who for decades inspired excellence and exemplified integrity.”

He was a confidant of Goodell's two predecessors, Pete Rozelle and Paul Tagliabue, both in the Hall of Fame with Shula. They used Shula as an adviser on key tenets of the game. There is no “Don Shula Law” on the books, but he was highly influential in the development of many rules.

“Don Shula represented the highest standards of excellence by virtually any measure," Tagliabue said Monday. “His contributions to the NFL and the game of football extended far beyond his all-time record victory total. Don also was an all-time winner when it came to integrity, honesty and class. The NFL owes him a great deal for his tremendous loyalty and work on behalf of the league and football fans across America.”

By Dan Greenspan an hour ago
By Alanis Thames 2 hrs ago
By W.g. Ramirez 3 hrs ago
By Rob Maaddi 3 hrs ago
By The Associated Press 4 hrs ago