Cowboys may have found Elliott's sidekick in speedy Pollard 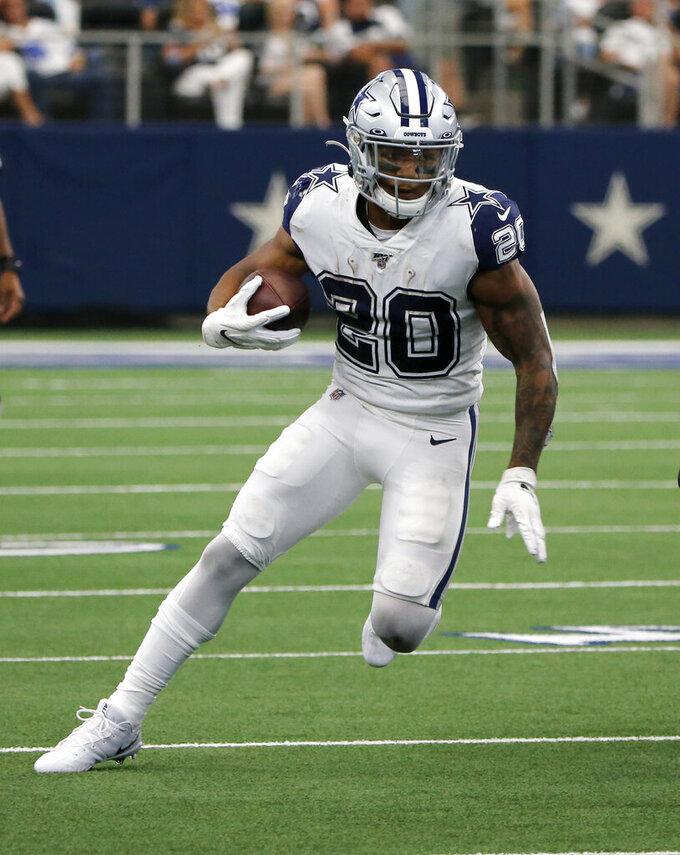 Dallas Cowboys running back Tony Pollard (20) runs the ball against the Miami Dolphins in the second half of an NFL football game in Arlington, Texas, Sunday, Sept. 22, 2019. (AP Photo/Michael Ainsworth)

FRISCO, Texas (AP) — Now that the schedule is getting more difficult and Ezekiel Elliott is pretty much up to speed after missing the entire preseason in a holdout, the Dallas Cowboys have to decide how prominent a role they want for rookie running back Tony Pollard.

Elliott has two straight 100-yard games, which means the two-time rushing champion is climbing the leaderboard again. But a third consecutive double-digit victory for the Cowboys (3-0) also led to the first 100-yard day, and first touchdown, for Pollard.

It's been 21 years since Dallas had two 100-yard rushers in the same game, and it might be that long before it happens again. Still, the Cowboys thought they drafted a hidden gem in the fourth round in the Memphis all-purpose back, and Pollard is proving them right.

The speedy Pollard, who excelled as a kickoff returner in college, seized the top spot in the backfield in the preseason with Elliott gone. Now the 22-year-old has looked more than capable as Elliott's backup in the games that count.

"We're trying to do what's best for our team and Zeke has been a big part of what we're doing since we drafted him," coach Jason Garrett said. "But Tony's a good football player and he's someone who's earned the trust of his teammates and of the coaching staff to play in games."

Elliott and Pollard had 13 carries apiece in the opener, a 35-17 win over the New York Giants. But Pollard had just 24 yards, a 1.8-yard average, as the offense stalled in the fourth quarter while featuring him and trying to run out the clock.

After just four carries in a 31-21 win at Washington in Week 2, Pollard had his breakout game in last week's 31-6 blowout of the dismantled Miami Dolphins. He had 13 carries again, but this time for 103 yards, punctuated by a 16-yarder for his first TD.

"It was definitely a confidence boost for me," Pollard said. "Just keeping the same mindset, working hard and always being ready for the moment. So I never have to get ready."

Elliott's heaviest workload so far came in the closest game of the three, at the Redskins. He was right on his career average of 25 touches coming into his fourth season.

The former Ohio State star was headed for similar numbers against the Dolphins but sat for the last half of the fourth quarter with the Cowboys leading by 18 points. Elliott finished with 19 carries for 125 yards and two catches for 14 yards.

"I had a good amount of touches last game, we got up early, got to sit out the fourth quarter, Tony got his touches and he made the most of it," Elliott said. "I think it's great having Tony to spell me because there hasn't been any fall off when he comes in there."

While Pollard was viewed as a change-of-pace back in the draft, the Cowboys thought he had the traits of a traditional runner. He showed that against the Dolphins, initiating contact for extra yards and not hesitating to run inside — the same tendencies he showed in the preseason.

"He's playing more decisively," Garrett said. "He's playing I think tougher. I think he's finishing runs really well. He had a number of good runs in the game that were after first contact. He made the guy miss, or he broke through the tackle and finished downhill on the run."

The biggest question is what happens without significant mop-up duty, which is what Pollard had against teams that are a combined 1-8.

The Cowboys visit New Orleans on Sunday, and the Saints (2-1) just went to Seattle and handed the Seahawks their first loss despite being without injured star quarterback Drew Brees. Next week, Dallas is home against Green Bay, which also started 3-0.

None of this changes the outlook for Pollard, who tried to ignore the question of when or whether Elliott would show up during training camp, and quietly faded to the background when Elliott finally arrived the day of the first full practice before the opener.

"I really just try not to do too much extra, try not to do something that's outside of me," Pollard said. "Just doing what I've been doing this whole time. Working hard and preparing. If you prepare right, then you'll be ready for the moment."

Now it's up to the Cowboys to decide the frequency of those moments.

NOTES: WR Amari Cooper was limited in practice for the second straight day Thursday after showing up on the injury report this week with an ankle injury. Garrett said Cooper also came out of the Miami game with a foot issue. Cooper missed most of training camp with plantar fascia soreness. ... RG Zack Martin missed practice Thursday with a back injury the three-time All Pro has been battling since training camp.