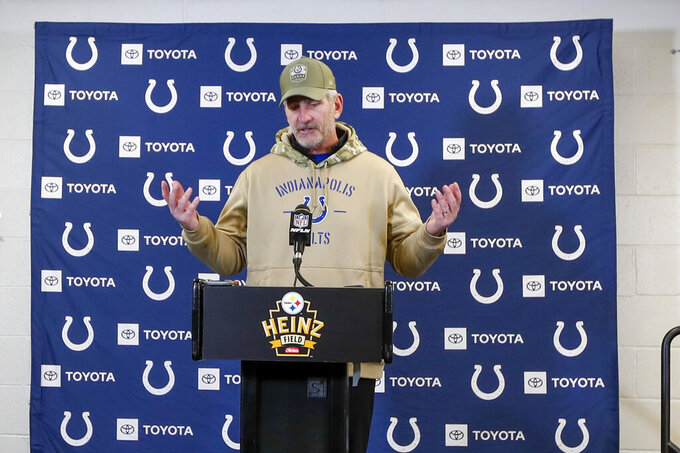 Now, both are in question.

A week after his 55-yard field goal lifted the Colts to a victory over Denver, Vinatieri's go-ahead 43-yard attempt in the final seconds against Pittsburgh on Sunday sailed wide left in a 26-24 defeat that snapped a three-game winning streak. Brissett, meanwhile, left in the second quarter with a left knee injury that forced backup Brian Hoyer into his first extended action in more than two years.

After living on the right side of the edge for six weeks — the Colts came in having won five of six by a combined 19 points — Indianapolis lost its sixth straight to the Steelers (4-4) behind three turnovers, five sacks allowed, seven penalties for 89 yards and one very ugly miss by the NFL's all-time leading scorer.

"I think that's the NFL, really," Hoyer said after throwing for three touchdowns and a pick-six by Pittsburgh safety Minkah Fitzpatrick in the second quarter that tied the game. "Pretty much every Sunday is going to come down to that fourth quarter."

Brissett watched that final quarter from the sideline after a teammate fell into his left knee with the Colts driving early in the second quarter. Brissett lay on the Heinz Field turf for several minutes before gingerly jogging off. He tested the knee out but never returned, though he stressed he felt "fine" afterward.

Colts coach Frank Reich described the injury as a sprain, and Brissett's status for next week's game against Miami (1-7) is uncertain. Hoyer, however, showed the drop-off isn't drastic if he's forced to play. He threw an 11-yard touchdown pass to Jack Doyle on his second snap on his way to completing 17 of 26 passes for 168 yards. Hoyer also drove the Colts from their own 15 to the Pittsburgh 25 — with the assist of a 40-yard pass interference penalty against Steelers cornerback Steven Nelson — before Vinatieri walked on for the potential game-winner.

The 47-year-old is enduring an uneven season. He has missed 10 kicks (five extra points and five field goals), including an extra point that was blocked in the third quarter Sunday and the potential game-winning attempt in the fourth, which never threatened the uprights.

Holder Rigoberto Sanchez said he shared some of the blame for his inability to get the laces in the right spot before Vinatieri swiped his right leg at the ball. Reich said the sequence "wasn't a crystal-clean operation" but added he still has "all of the confidence in the world in Adam."

Vinatieri said he "just missed it."

Either way, the Colts now find themselves trailing Houston by a half-game in the AFC South following a frustrating afternoon in which they held the Steelers to 273 yards but watched Pittsburgh convert three turnovers into 17 points. Indianapolis also gave the Steelers three points at the end of the first half when linebacker Darius Leonard was called for unnecessary roughness on Pittsburgh tight end Vance McDonald on a short catch by McDonald near midfield. Time ran out after the play, but the Steelers were awarded 15 yards and an untimed down. Chris Boswell's 51-yard field goal sailed through to trim the Colts' lead to 16-13 at the break.

"We just shot ourselves in the foot one too many times, and when you do that on the road, it's really tough to win," Doyle said. "We all took our turns doing it and that stinks."