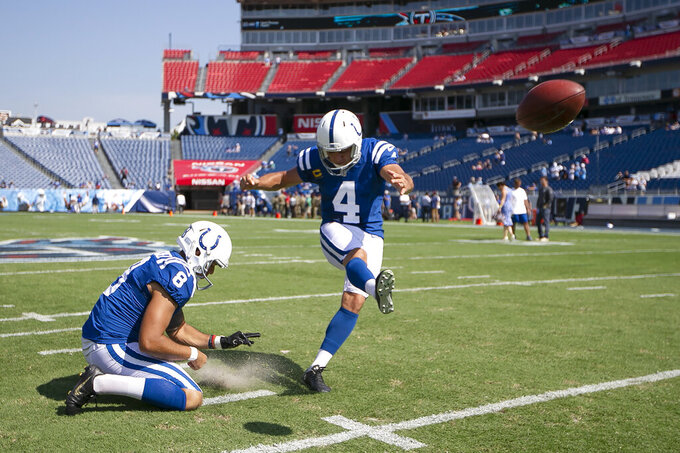 The NFL's career scoring leader left the team complex Monday afternoon without speaking to reporters, though he promised a day earlier he would as speculation swirled that the 46-year-old might retire.

"In a strange way before the game started yesterday, I was kind of hoping it came down to a 60-yard field goal to win the game," Reich said. "I'm hoping that that's going to happen one of these games and he's the guy — there's nobody else I'd trust more than I would trust Adam Vinatieri."

Given Vinatieri's history, Reich has good reason to believe Vinatieri will solve an early-season slump that might go down as the worst of his 24-year career.

In a season-opening overtime loss to the Los Angeles Chargers, Vinatieri missed two field goals and an extra point in a game for the first time in his career. Afterward, he blamed himself for the loss.

On Sunday, at Tennessee, it almost happened again. After making the first extra point, he pulled the second one wide left while the third hit the right upright. Indy's defense prevented the Titans from moving into position for a potential shot at a winning field goal.

Reich said the first miss Sunday was the result of a bad snap. But It was clear Vinatieri was frustrated with his performance.

He atypically did not take questions following the game, instead telling reporters he would talk Monday — a day Colts players do not normally meet with media members. Some people wondered if that meant another retirement announcement might be forthcoming less than a month after Andrew Luck's surprise departure.

But Monday came and with Vinatieri still silent. Reich said Vinatieri would speak Tuesday and sounds as if he expects Vinatieri to be kicking Sunday against Atlanta in Indy's home opener.

When asked whether the Colts might try out kickers this week, Reich deferred to general manager Chris Ballard. Reich has a clear preference.

"I know there has been a lot of discussion about Adam. I just want to make this clear — Adam is our kicker," Reich said. "Like I said yesterday, we have zero concern. He's not only our kicker, he's an instrumental leader on our team."

Vinatieri has had one of the longest and most successful careers in league history.

He owns four Super Bowl rings, is the only player in NFL history to score 1,000 points with two franchises, and has made some of the most memorable kicks in league history, including two Super Bowl winners. Vinatieri also has participated in a record 216 regular-season wins, has played in the second-most games in NFL history (355), and is the third-oldest player to ever suit up for a game.

Clearly this season has not been vintage Vinatieri.

After dealing with a lingering groin injury last season, Vinatieri missed part of training camp and the preseason with knee tendinitis — an injury neither Reich nor Vinatieri have used to explain the errant kicks.

And even though team owner Jim Irsay expressed "concerns" about the continued misses, Reich reiterated Monday he is not worried.

Former holder Pat McAfee told listeners on his new show for DAZN he believes Vinatieri is more concerned about how the misses could impact the team's ability to win.

"I got to talk to him last night and he doesn't enjoy the fact that he feels like he's a liability to his team," McAfee said. "I have no idea what he's planning on doing. He's always said, 'As long as I continue being an asset for the team, I'll continue doing it.' Right now, I think Vinatieri has the feeling he is letting his teammates down, and he doesn't like it."

"Adam will figure it out. We have the confidence and belief that he will figure it out," Reich said. "He will do what he needs to do. Has it been two weeks of sub-par? Yes. Is it catastrophic? No. Some of the most elite players that I have ever seen or played with or coached - I have seen them have two bad weeks in a row."