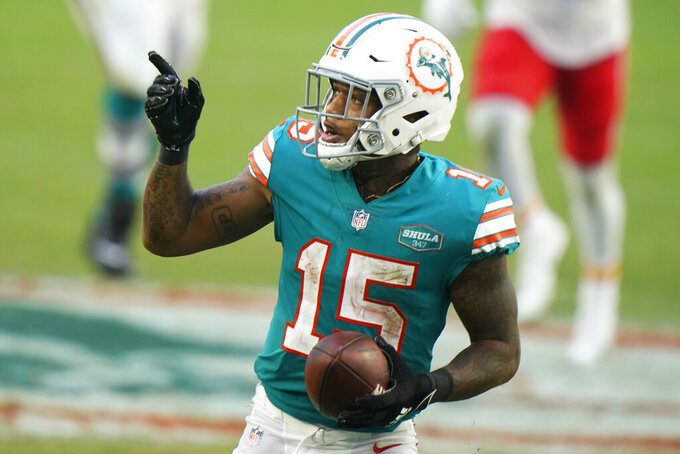 Miami Dolphins running back Lynn Bowden (15) gestures during the second half of an NFL football game against the Kansas City Chiefs, Sunday, Dec. 13, 2020, in Miami Gardens, Fla. Bowden had seven catches for 82 yards, both season highs that led the team. (AP Photo/Wilfredo Lee)

MIAMI (AP) — A rash of Miami Dolphins injuries has given rookie receiver Lynn Bowden Jr. the chance he never had with the team that drafted him.

With Miami's top four pass-catchers sidelined by the end of Sunday's game against Kansas City, Bowden was busy. He had seven receptions for 82 yards, both season highs that led the team.

“He did some really good things; he made some plays," offensive coordinator Chan Gailey said Tuesday. "We asked him to do a lot, and he responded very well. He’s learning. He’s getting more comfortable. He’s understanding what we’re trying to get done. I think he’s going to be a part of what we’re trying to do going forward.”

At least a couple of the Dolphins' ailing pass-catchers might be back for Sunday's game against New England, but Bowden has earned playing time by showing an ability to get open and elusiveness when he has the ball.

The Dolphins (8-5) also like his versatility, even though it's one reason he had trouble finding a role at first in the NFL. He played quarterback and receiver and was the leading rusher at Kentucky, where he won the Paul Hornung Award as the nation's most versatile player.

The Las Vegas Raiders drafted him in the third round in April as a running back, but that experiment failed. At the end of training camp, they traded him to the Dolphins in a deal that also involved draft picks.

“You can’t worry about the past,” Bowden said. “Everything happens for a reason. I’m a Dolphin now.”

Bowden's progress with the Dolphins has come slowly, which is not surprising given that he missed their training camp. He was inactive for five games and sat out one game while on the COVID-19 list.

He had four catches in Week 13 against Cincinnati and was even more active last week, playing 71% of the offensive snaps. Bowden was targeted nine times, and twice took handoffs on plays designed for him to throw, including once with quarterback Tua Tagovailoa the intended receiver.

Neither play worked, but it gives future opponents another thing to prepare for.

Bowden acknowledges he always wanted to be a quarterback, and studied video of Lamar Jackson.

“Me and him had similar playing styles coming out of high school,” Bowden said. "When I moved to quarterback at Kentucky, I was like, ‘Why not watch him,’ because he was basically a spitting image of me. I took it from there and ran with it.”

Bowden said he embraces the role with the Dolphins playing multiple receiver spots. But like any good quarterback, he's focused on the big picture rather than his latest statistics.