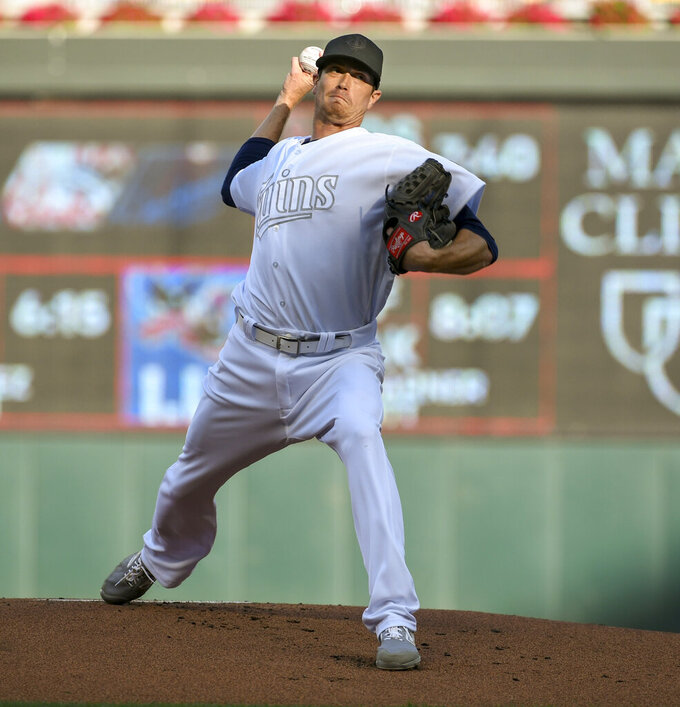 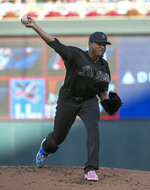 "That's what our offense does," said Gibson (12-6). "As a starting pitcher, we know we have room for error. It's our job to go out there and just keep it close, and give the offense a chance to strike whenever they're ready."

Sano and Cave both homered twice Friday night in a 9-6 loss to the Tigers, who have the worst record in the league. They kept slugging away as the Twins overcame an early 4-1 deficit.

Gibson allowed the leadoff batter to reach in all six innings he pitched while receiving limited help from his defense.

A fielding error by second baseman Luis Arraez led to the second of two Tigers runs in the second, and Dawel Lugo slid headfirst to score on a botched rundown in the two-run third. Gibson struck out eight in 5 1/3 innings while charged with five runs, four earned.

"That's what makes everything that happened after that impressive, because our guys didn't let that affect them going forward in the game," Twins manager Rocco Baldelli said. "We continued to make the plays and pitch well and have good at-bats, and eventually found a way to win."

Kepler's sixth leadoff homer left him two short of Brian Dozier's 2017 club record. Jackson held the Twins scoreless from there until the fifth, when Cave's leadoff double started the rally. Kepler doubled in one run and Nelson Cruz singled in another before Sano pulled Jackson's first pitch into the second deck in left, his 26th homer.

"I go up ready to hit — fastball, slider, changeup, whatever they throw," Sano said. "He threw me a cookie in the middle. I saw that pitch right down the middle and I was ready to swing."

Jackson (3-7), who has pitched for a major league record 14 teams, allowed six earned runs in five innings in his first career start at Target Field.

"Any time a team comes out and gives me three or four runs, then I feel like I should be able to keep that game in control, which I didn't do tonight," Jackson said. "That game was on me. I take full responsibility for it."

Taylor Rogers, in his first appearance since Aug. 18, secured the final five outs for his 20th save, working out of a two-on, one-out jam in the eighth.

Tigers rookie shortstop and top prospect Willi Castro, called up from Triple-A Toledo earlier in the day, went 2 for 4 with a double in his major league debut.

"It's a dream come true, something that I always wanted since a little kid," Castro said. "And we're here."

On his way to Target Field, Cruz stopped by U.S. Bank Stadium to blow the Gjallarhorn before the Vikings' 20-9 preseason victory over Arizona. The Gjallarhorn is enormous, but Cruz, given a personalized No. 23 Vikings jersey, wasn't concerned about getting the proper sound out of it.

"They have a machine that does it for you," he said.

Twins RHP Ryne Harper, who had spent the entire season in the majors, was optioned to Triple-A Rochester while RHP Cody Stashak was recalled for the third time. Harper was 3-2 with a 3.65 ERA in 58 games but hasn't been as effective lately, posting a 7.36 ERA in 10 August appearances.

Tigers: INF/OF Niko Goodrum, who aggravated a left groin strain Friday night, went on the 10-day injured list, allowing the Tigers to call up Castro from the minors. Castro is expected to start at short the rest of the season, with Jordy Mercer shifting to a utility role. Goodrum is headed to Philadelphia to be examined by Dr. Williams Meyers, a core muscle specialist.

Twins: CF Byron Buxton (dislocated left shoulder) drove a rental car Saturday afternoon to Cedar Rapids, Iowa, to begin a rehab assignment with the Class A club there, according to the Twins. Baldelli said Buxton is expected to DH on Sunday and start in center Monday. "It's exciting to see Buck finally get out there," Baldelli said. Buxton, out since Aug. 2, could rejoin the club on the upcoming road trip to Chicago, Detroit and Boston.

LF Eddie Rosario (right hamstring strain) was not in the lineup for the second consecutive day, though he worked out on the field. Baldelli said Rosario could go on the injured list if the hamstring hasn't significantly improved by Sunday.

Twins: LHP Martin Perez (8-5, 4.60 ERA) faces the Tigers looking for his first victory since July 5. Perez struggled in four consecutive starts from July 22 to Aug. 7 before improving over his last two outings, no-decisions at Milwaukee (one unearned run in six innings) and Texas (two earned runs in five innings.)

Tigers: LHP Matthew Boyd (6-9, 4.24 ERA) returns from paternity leave. He passed the 200-strikeout mark in his last start, a no-decision at Tampa Bay despite allowing only one run on two hits in seven innings. Winless since July 4, Boyd is 3-4 with a 5.40 ERA in eight career Target Field starts.