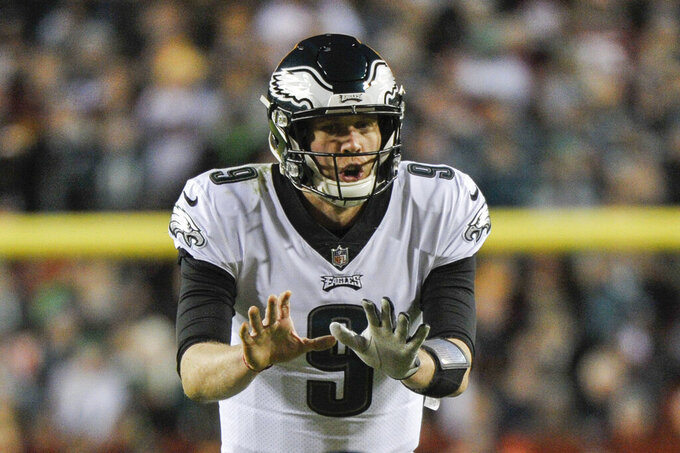 FILE - In this Sunday, Dec. 30, 2018 file photo, Philadelphia Eagles quarterback Nick Foles (9) calls for the snap during the first half of the NFL football game between the Washington Redskins and the Philadelphia Eagles in Landover, Md. Defense is the area with the most depth in this year's free agency class, Monday, March 11, 2019. (AP Photo/Mark Tenally, File)

JACKSONVILLE, Fla. (AP) — The Jacksonville Jaguars have a new quarterback, maybe even the franchise passer the team has been missing for nearly two decades.

A person with direct knowledge of the decision says quarterback Nick Foles has agreed to sign a four-year, $88 million contract with the Jaguars.

The person spoke to The Associated Press on condition of anonymity Monday because the deal cannot become official until free agency opens Wednesday. The person says the deal includes $50.125 million guaranteed and could be worth up to $102 million with incentives.

NFL Network first reported the deal, which is the richest in franchise history.

The 30-year-old Foles went 4-1 in the postseason and 6-2 in the regular season in place of Carson Wentz the last two years. He earned 2018 Super Bowl MVP honors, making himself the league's premier quarterback commodity.

Philadelphia opted not to use the franchise tag on Foles, allowing him to hit the open market.

A third-round pick in by Philadelphia 2012, Foles started six games as a rookie and 18 more before signing with St. Louis in 2015. After one season as the Rams' starter, he moved to Kansas City, where he rejoined former Eagles coach Andy Reid to serve as the backup to Alex Smith. In 2016, Foles returned to Philadelphia to mentor Wentz and wound up becoming a fan favorite and a Super Bowl champion.

Jacksonville's offense mostly sputtered under Bortles, who went 24-49 as a starter. He completed 59 percent of his passes for 17,646 yards, with 75 interceptions. His toughness and mobility were among his best assets, but he still was sacked a whopping 195 times in 75 games. He also lost 19 fumbles.

Bortles played turnover-free football in the 2017 postseason, helping the team reach the AFC championship game and showing enough growth that top executive Tom Coughlin and general manager Dave Caldwell opted to sign him to a three-year, $58 million contract in February 2018.

The deal included $26.5 million guaranteed. Bortles is due a $1 million roster bonus Sunday.

Jacksonville will save $4.5 million against the 2019 salary cap when it cuts Bortles later this week. That number could rise to $9.5 million if the team designates him a post-June 1 release.

The worst part of the contract is the Jaguars didn't need to do it. They already had picked up the fifth-year option in Bortles' rookie contract and could have let him play 2018 at $19 million and wouldn't owe him anything now.

Regardless, Foles is expected to fill a much-needed void for a small-market franchise that has failed repeatedly at the all-important QB position. The Jags spent a combined $95 million on quarterbacks Byron Leftwich (2003-07), David Garrard (2002-10), Blaine Gabbert (2011-13) and Bortles (2014-18).

Now, they've committed another $50 million to Foles in hopes that he will be the answer to the team's most consistent problem.