Bears' offense struggles yet again in 24-17 loss to Titans 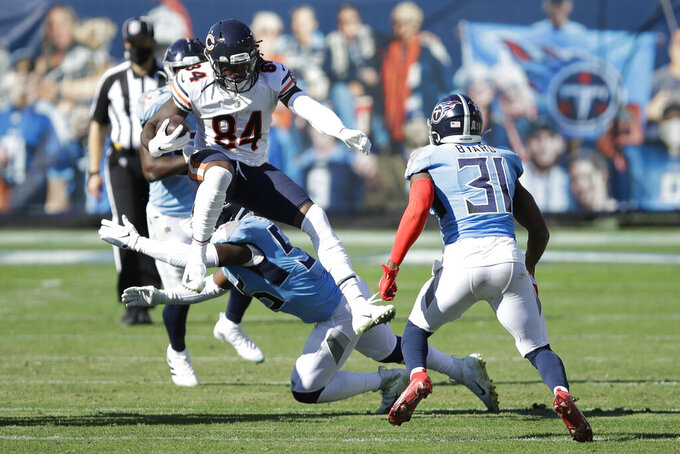 Scoring earlier than the final 15 minutes remains a big problem, and the Bears' anemic offense provided no help Sunday as they were held scoreless through three quarters in a 24-17 loss to the Tennessee Titans.

Nick Foles threw for 335 yards and two touchdowns as Chicago (5-4) outgained Tennessee 375-228. The Bears also held the ball for nearly 34 minutes and scored 17 points in the fourth quarter.

Not that it mattered as the Bears turned it over on downs on their first possession, followed that with six straight punts wrapped around halftime before a fumble returned 63 yards by Titans cornerback Desmond King for a touchdown late in the third quarter.

Foles, who just made his sixth straight start for Chicago after replacing Mitchell Trubisky, said they have to keep working.

“I don’t know what y’all expect me to say, but other than I believe that we have to keep working at it and keep grinding and keep figuring out what we want to do and how we want to do it, and that’s the only way to be because, quite frankly, we’re the ones in it," Foles said.

Chicago has outscored opponents 92-33 in the fourth quarter. But that's the Bears' best quarter by far. Even the third quarter, where they're being outscored 56-7 this season, the Bears outgained Tennessee 135-12 and held the ball for nearly 13 minutes only to find themselves with no points.

Patching together an offensive line is having an effect as well. Nagy said the Bears aren’t in a position as an offense to make things hard.

“That’s a simple fact,” Nagy said. “We need to do everything we can to stay ahead of the sticks so that we can play football and then get the run game going and get the quick game going. And when you pick and choose to take a shot, you have to protect so that you can hit that shot.”

The Bears also cost themselves scoring chances. Foles hit Allen Robinson for a 4-yard pass on third-and-5, and the receiver went out of bounds shy of the first down. David Montgomery was stopped for no gain on fourth-and-1 at the Tennessee 35.

Chicago didn't have a penalty over its first six drives. With the ball at midfield and 54 seconds left in the first half, left tackle Charles Leno Jr. moved for a false start. Then Coward was flagged for illegal use of hands. The half expired with the Bears still stuck at midfield.

The Bears had another chance at points to start the third quarter, driving to the Tennessee 31. The Bears wanted to go for it on fourth-and-1 except Hambright was flagged for a false start followed by a false start on veteran tight end Jimmy Graham.

“It’s got to stop, and those are ones there that we’ve just got to get better at,” Nagy said.

Now the Bears face the challenge of trying to snap this three-game skid heading into a three-game stretch inside the NFC North starting by hosting Minnesota in a prime-time game on Nov. 16.

Robinson said they just have to figure out how to play their game and what they can do best.

“Unfortunately, we dropped three in a row,” Robinson said. "But at the end of the day, we still got a lot of football ahead of us. We still got seven games left. We got to put our foot on the gas and keep it going.”