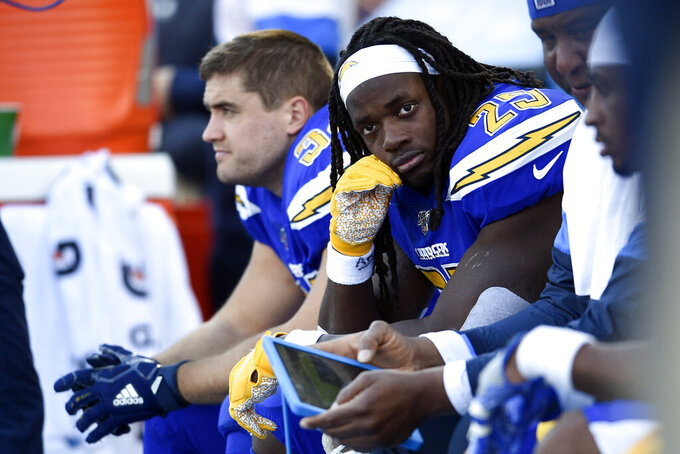 Not that you'd know it from the way his Los Angeles Chargers put the pigskin on the ground in their most humiliating loss of a humbling season.

Lynn was a running back at Texas Tech and in the NFL, and he spent 14 seasons as a running backs coach before moving up the coaching ladder. The imperative of not fumbling has been a central part of his entire professional life.

The Chargers' butterfingered, seven-turnover performance in their 39-10 loss to Minnesota on Sunday was personally offensive to their head coach.

“We didn’t have seven fumbles all year, and all of a sudden we can’t hold on to the football,” a fuming Lynn said afterward. “It was bad. ... I have no idea where that came from. It’s very uncharacteristic of our football team to have that many fumbles.”

The Chargers (5-9) fumbled five times, losing four of them, after losing only seven fumbles in their first 13 games combined.

Philip Rivers also threw three interceptions to bring his season total to 18, matching the third-worst total of his 16-year career.

The Vikings scored 20 points off the miscues by Los Angeles. Ifeadi Odenigbo's 56-yard return of Rivers' fumble for a touchdown with 7 seconds left in the first half was the most eye-catching moment, but the Chargers' biggest loss of the season by far was a cascade of major mistakes by the offense.

Los Angeles' first eight losses were all by seven points or fewer. This one wasn't close — not with the Bolts repeatedly undermining themselves.

If it's any consolation, neither had his four most recent predecessors in this job — not Mike McCoy, not Norv Turner, not Marty Schottenheimer, and not even Mike Riley.

The Chargers hadn't committed seven turnovers in a game since December 1998. It happened for only the 17th time in the franchise's 60-year history.

NFL teams have committed seven turnovers in 25 games in this century. Tampa Bay is the only other team to do it this season.

But a combination of Chargers inattentiveness and the Vikings' ball-stripping defensive play led to a fiasco.

Rivers and Hunter Henry also lost fumbles, although Henry's mistake occurred on a bang-bang play that easily could have been ruled an incompletion.

Austin Ekeler knocked his only official fumble out of bounds, but the running back also failed to hold on to Rivers' fumble right before halftime because he tried to run with the ball instead of falling on it. Odenigbo pounced for a scoop-and-score TD.

Gordon then promptly fumbled on the first play of the second half. Lynn didn't acknowledge Gordon when the frustrated running back walked off the field right next to him after that turnover, which led to a field goal and a 22-10 lead for Minnesota.

Gordon then sat out an extended stretch of the second half, with Lynn icily saying that he “gave him a break.”

Gordon, who could be down to his last few games with the Chargers, didn't shirk his responsibilities for the problems. Although LA is eliminated from playoff contention, Gordon believes the mistakes show the Bolts haven't given up on their season.

“I was just itching to make a play, make something happen,” Gordon said. “And you worry so much about trying to make something happen, you lose focus on the ball. And with the players playing defense in this league, you lose focus for one second, and they’re going to get the best of you. ... You get in times like this, and you’re desperate to make a play. I got humbled."